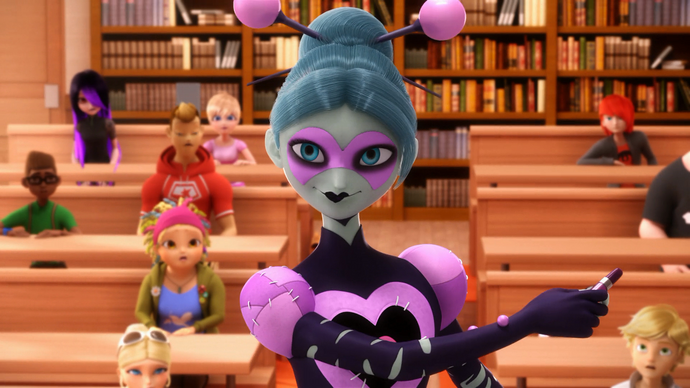 The students give gifts to Miss Bustier on her birthday but the popular teacher is akumatized into Zombizou, a monster armed with evil black lipstick.[4]

Marinette runs into the school locker rooms where everyone is showing the gifts they made for Miss Bustier's birthday. Mylène got her a braid of hair inspired by the breathing classes that make her less afraid of akumas. Nathaniel made a drawing of her as a superhero since she is always there for her students. Rose made her a scrapbook inspired by the excerise she makes them do where they exchange a nice compliment with their neighbors. Hearing all those thoughtful gifts makes Marinette fear that her gift is lame, but Alya assures her that there's no pressure. Adrien and some of the other students gather around Marinette to see what she has, and she shows them that she made a cosmetics bag for Miss Bustier with a quote that she'd taught her classmates on the first day of school and added a tube of lip balm inside of it. Adrien then asks Chloé what she got Miss Bustier, but Chloé doesn't respond, so the whole class is disappointed that she didn't get anything. Sabrina defends her by saying that Chloé just doesn't remember birthdays like her mother. Chloé tells Sabrina that the class doesn't need to hear her life story and even calls Miss Bustier's lessons about love ridiculous. Marinette whispers to Alya that Chloé has no heart, which Chloé overhears and is provoked. When everyone leaves for Ms. Mendeleiev's class, Chloé sabotages Marinette's gift by drawing on it with permanent marker.

When it's time for Miss Bustier's class, everyone hands over the gifts they got her. Miss Bustier opens Marinette's first and is surprised by it. Noticing her confused expression, Marinette goes over to Miss Bustier and sees the permanent marker all over the bag. She immediately realizes that it was Chloé's wrongdoing and calls her out on it. The rest of the class is just as displeased. Alya calls Chloé worst than Hawk Moth, and Alix even points out how over half the city was akumatized because of her. Miss Bustier, however, is more forgiving, calling the present wonderful and saying that she'll be able to think of both Marinette and Chloé every time she uses it. Marinette believes that Chloé shouldn't get away with what she did, but Miss Bustier asks to speak to Marinette outside the classroom and puts Alya in charge while the two are gone. Thinking that she is in trouble, Marinette's emotions became negative. Hawk Moth senses Marinette's feelings of injustice and sends an akuma after her.

Marinette expresses her anger over getting in trouble over what Chloé did, but Miss Bustier assures her that she isn't in trouble. She just wants her to set a positive example for her classmates by forgiving Chloé. This makes Marinette's negative emotions fade away before the akuma can infect her. Marinette stated that Chloé is the meanest person she's ever known, but Miss Bustier reminds Marinette that there are much worst people in Paris than Chloé Bourgeois. She expresses her belief that people like Chloé can do great things but only think of themselves and need a positive example to change. Marinette understands. Miss Bustier then notices the akuma and fearfully tries to shoo it away, unaware that her being afraid makes her vulnerable to it. She throws the cosmetics bag at it and it infects the lip balm inside. Miss Bustier tries to fight the akuma, but Hawk Moth is able to convince her that he wants to help her spread love in the world in exchange for Ladybug and Cat Noir's Miraculouses. Miss Bustier accepts the deal and is transformed into Zombizou. Refusing to let Hawk Moth get away with akumatizing Miss Bustier, Marinette runs into the locker room and transforms into Ladybug.

Zombizou bursts into her classroom and smears lip balm on her lips. She then tells her students that from now on, everyone is going to hug, kiss, and feel the love -- even Chloé. She blows a kiss at her, but Chloé uses Sabrina as a human shield and the kiss touches her forehead instead. Before Zombizou can blow another kiss, Ladybug intervenes and begs Miss Bustier to stop. However, she says that she is no longer Miss Bustier and attacks Ladybug. While the two battle, the rest of the class runs out of the classroom. While running down the stairs, however, Sabrina began to feel sick and soon becomes a kissing zombie who tries to kiss Chloé. Adrien drags Chloé away from Sabrina, who kisses Mylène instead, turning her into a kissing zombie. Adrien realizes that the kisses are contagious and warns everyone not to let themselves get kissed. Ivan holds Sabrina and Mylène back while everyone else escapes.

Ladybug continues to fight Zombizou in Miss Bustier's classroom until an infected Sabrina, Mylène, and Ivan burst in. Zombizou decides to leave Ladybug in their hands and goes from classroom to classroom looking for Chloé while blowing more kisses at students. Ladybug manages to tie down Sabrina, Mylène, and Ivan and then looks for anyone who hasn't been infected. She eventually finds Miss Bustier's class hiding inside lockers in the locker room. However, Adrien doesn't come out of his locker, and when Ladybug checks on him, she finds that he has been turned into a kissing zombie. More kissing zombies burst into the locker room, so Ladybug takes everyone up on the roof. Once they're gone, it is revealed that Adrien is actually not a kissing zombie and only pretended to be in order to be able to transform into Cat Noir, though Plagg wonders if it was actually a ploy to get a kiss out of Ladybug.

Cat Noir joins everyone on top of the roof where Ladybug shows him a news broadcast of the kissing zombies. The mayor makes an announcement advising people to stay indoors, but is tackled and infected live on the air by, of all people, Roger the policeman! Zombizou then infects anchorwoman Nadja and announces that she is coming after Chloé and then Ladybug and Cat Noir. Angry that another person was akumatized because of her, everyone starts to wonder if they should just give Zombizou what she wants, but Ladybug intervenes by saying that Chloé doesn't deserve to get hit and will be needed as bait to lure Zombizou when the time comes. Just then, the kissing zombies manage to climb onto the roof, so Ladybug spots a nearby bus and comes up with a plan to lure everyone into safety. Cat Noir jumps onto the bus roof and uses his staff and belt to make a zipline, bringing the students inside of the bus one at a time. Unfortunately, they are unable to save everyone, as Max and Kim are infected. When Chloé ziplines, she goes too fast and misses the bus. Rose goes out of the bus and saves her, though Chloé complains about her being too slow. Ladybug brings Rose and Chloé inside of the bus and then Cat Noir drives off, though he's not well experienced with the bus. Juleka comforts a shaken Rose, who has unknowingly been kissed on the leg.

While Cat Noir drives, he and Ladybug discuss their plan to bring Chloé to the Eiffel Tower in order to draw out Zombizou. They then hear Juleka scream. They turn around to find that she had been kissed by an infected Rose. Rose runs towards the duo, but Alix holds her back, having faith in Ladybug. Chloe complains about people attacking her personal space, which made both Alya and Nino angry. Meanwhile, Zombizou is reminded by Hawk Moth not to forget their deal. Zombizou assures him that no one can escape her kiss and heads to the Eiffel Tower.

Ladybug, Cat Noir, Chloé, Alya, and Nino run inside the Eiffel Tower building and hold the doors back with a vending machine. Alya frantically pushes the elevator buttons, but when the elevator opens, a few kissing zombies pop out and kiss her. Cat Noir heads inside the elevator with Chloé, realizing that there's nothing they can do for her. Alya agrees and tells Ladybug to just go and save them all. Ladybug goes inside the elevator and tells Nino to come with them, but Nino decides to stay with Alya instead. Ladybug is against this but it is too late to stop him. Cat Noir says that it's okay, knowing that Ladybug will fix everything in the end. Nino notes that it isn't the first time he and Alya have been in trouble together before an infected Alya kisses him.

Ladybug and Cat Noir reach the top of the Eiffel Tower. While Cat Noir holds the kissing zombies back, Ladybug hides Chloé inside of Gustave Eiffel's office. Chloé freaks out when she sees someone, but calms down upon realizing that it's just a statue. When Ladybug heads back to Cat Noir, she finds that he has been kissed. Cat Noir assures her that he'll be fine and that she should just save everyone. Though Ladybug doesn't want to, she leaves him behind and goes back inside of Gustave Eiffel's office, where she finds Chloé hiding underneah a table. After Chloé wishes Ladybug good luck, Zombizou appears and demands that Ladybug hand over Chloé and her Miraculous. Ladybug calls on her Lucky Charm and receives makeup remover. While figuring out what to do with it, an infected Cat Noir bursts into the office with his Cataclysm and tries to kiss Ladybug. Ladybug runs from him and grabs the scarf on the statue's neck, putting the makeup remover on it. Cat Noir nearly kisses Ladybug, but Chloé takes her hit instead and tells Ladybug to save them all.

Ladybug goes on top of the Eiffel Tower and is confronted by Zombizou, who demands that she accept her love and hand over her Miraculous. Ladybug refuses and throws her yoyo, which she tied the scarf with makeup remover on, at Zombizou, wiping the lip balm off her face. Before she can reapply, Ladybug grabs the lip balm and releases the akuma before purifying it and using Miraculous Ladybug to return everything to normal. Hawk Moth says that if Zombizou is right about love conquering all, his greatest wish will come true for sure.

After Miss Bustier is deakumatized, she feels awful about letting her negative emotions get the better of her, calling herself terrible. Ladybug, however, assures her that it wasn't her fault, saying that Hawk Moth is the one to blame, but Miss Bustier still feels bad about hurting so many innocent people. However, Chloé intervenes, saying that she is the one to blame. She admits that she'd forgotten Miss Bustier's birthday and when she saw that everyone else had a gift, she lost it because she wanted to give her something, too. She also apologizes to her. Miss Bustier accepts the apology and embraces Chloé.

The next day at school, Alya demands that Chloé apologize to the class about what happened the previous day, but Chloé retorts that everyone should thank her for saving them. Alya disagrees, but then Marinette intervenes and thanks Chloé for helping Ladybug and saving Miss Bustier. She also takes back her earlier comment about Chloé being heartless before dragging herself and Alya back to their seats. Alya asks Marinette why she did that, to which Marinette replies by saying that she has realized that Chloé has a heart but doesn't know how to use it, but may learn if they set a positive example. The two then notice Chloé put something on Miss Bustier's desk just before the teacher walks in and greets her students. In the end, it's just a letter with Chloe's name on it.

Retrieved from "https://miraculousladybug.fandom.com/wiki/Zombizou?oldid=732441"
Community content is available under CC-BY-SA unless otherwise noted.