Zoé is a French teenage girl and a student at Collège Françoise Dupont. She is also Chloé Bourgeois's half sister.[1]

In "Queen Banana," she will receive the Bee Miraculous and will become Vesperia, a bee-themed superhero.

She has platinum-blonde hair with hot-pink bangs on the right side, blue eyes and peach lips.

She wears a black blazer over her white top and yellow pants. On her feet, her shoes has white shoelaces, toe cap, and sole. But the sides of her shoes are decorated with blue, lime-green, and pink heart patterns with black outlines. There's a lime-colored crown on the left side of her left shoe and a white skull on the left side of her right shoe. The midsole of the shoes seem to be decorated with different drawings that appeared to be drawn with a black permanent marker. The left shoe has a red heart drawn on the toe cap. She also wears a black bracelet on her left wrist.

As Vesperia, she wears a yellow and black, bee-themed skintight outfit. Her hair becomes braided and her bangs are of equal length also gain a black streak.

Presuming this holder has the same abilities as the most recent Bee Miraculous holder, Chloé, she has enhanced physical characteristics such as speed, strength and agility. She also has the superpower Venom, enabling her to immobilize her opponents. 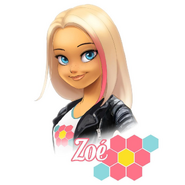 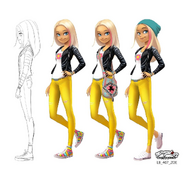 Retrieved from "https://miraculousladybug.fandom.com/wiki/Zoé?oldid=746266"
Community content is available under CC-BY-SA unless otherwise noted.