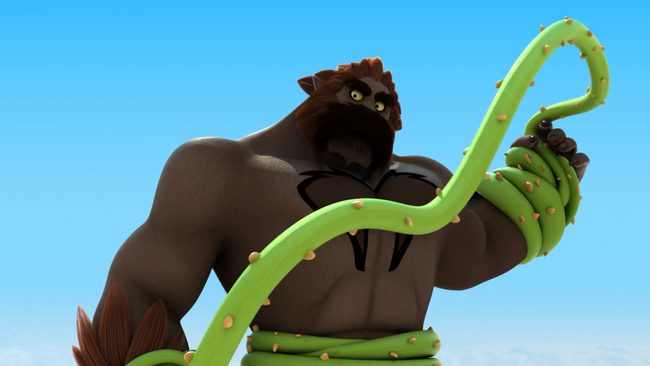 Disappointed that Cat Noir doesn't return his daughter's love, Tom becomes Weredad, who locks Marinette in a magic prison to protect her from hurt.[8]

Late at night, Gigantitian is causing havoc throughout Paris looking for some cake. When he approaches the Dupain-Cheng bakery, Tom comes out and vows to protect his home, though Sabine and Ladybug warn him of the danger. Ladybug tries to restrain Gigantitan with her yo-yo while Cat Noir flirts with her, but the villain flings her into a giant Adrien advertisment. Cat Noir jokingly tells her that his poetry must've at least made her swoon, though Ladybug tells him that's not the case and then calls on her Lucky Charm, receiving a giant plastic donut. Gigantitan grabs the donut and puts it in his mouth, though upon realizing that it isn't food, he throws it away and it smashes through Marinette's room. Worried, Tom rushes to check on Marinette while Ladybug and Cat Noir defeat Gigantitian and turn him back into baby August. Tom is horrified to find that Marinette is not in her room and alerts Sabine.

Meanwhile, Ladybug picks up August's pacifier and kisses him, causing Cat Noir to remark that he's jealous. Ladybug gives August to him and takes off. Cat Noir notices how sad August looks all of a sudden and at first believes that he misses Ladybug, but soon realizes that he wants his pacifier. Cat Noir takes off after Ladybug but is surprised when he instead finds Marinette. He comments on how Marinette always appears just after Ladybug detransforms. After thinking about it, Cat Noir realizes something. Marinette fears that he suspects that she's Ladybug, so she panics and tells the superhero that she's in love with him, even hugging him tightly. Tom overhears this and is overjoyed, so he invites Cat Noir to have brunch at his house on Sunday. Cat Noir is at first reluctant, but when Tom mentions that he'll make macarons, Cat Noir accepts. Once he leaves, Cat Noir tells August that he'd assumed that Marinette was just a fan and is surprised that she's in love with him. Meanwhile in her room, Marinette is in shock over what just happened. Tikki tells her that she shouldn't have lied about her feelings, but Marinette reminds her that Cat Noir almost found out she was Ladybug.

Tom is so excited about having Cat Noir over for dinner that he prepares several heart-shaped foods for the occassion. Sabine reminds him that Cat Noir never said that he was in love with Marinette, but Tom believes that he must be since everyone loves Marinette.

Cat Noir goes into Adrien's room and detransforms. Plagg congratulates Adrien on getting himself a girlfriend, but Adrien is surprised that Marinette is in love with Cat Noir, having believed that he wasn't her type. Plagg is excited since Cat Noir dating Marinette means that they can get unlimited amounts of cheese from the Dupain-Cheng bakery, but Adrien reminds Plagg that he's in love with Ladybug. Plagg believes that dating both girls will boost his chance of success and comments to himself on how Ladybug and Marinette are actually the same girl. However, Adrien decides that he must tell Marinette the truth.

While Tom gets everything ready for the dinner, Marinette looks outside her balcony for Cat Noir. She is convinced that he won't come since he's in love with Ladybug, though Tikki is not entirely sure, believing that the amount of times Ladybug rejected him might have changed his mind. Marinette, however, insists that Cat Noir is too stubborn to change his mind.

At the Agreste mansion, Adrien is eating alone in the dining room. Plagg reminds him that they should already be heading to Marinette's, but Adrien tells him to hide as Nathalie walks in and reminds Adrien that he has 24 minutes to finish eating before his Chinese class. Adrien asks if his father is too busy to eat with him, to which Nathalie tells him when the next scheduled dinner between him and his father is. Sadly, Adrien goes up to eat in his room. Plagg is excited since they can now go to Marinette's, but Adrien reminds him that he's only going there to inform Marinette that he isn't in love with her. Not wanting to break her heart, Adrien decides to bring the pink rose on his dinner tray as a gift for Marinette.

Marinette doesn't see Cat Noir and is now sure that he's not coming, but before she leaves, Tikki spots Cat Noir heading towards the bakery. Marinette is in shock at the possibility that Cat Noir fell in love with her and changed his mind about his love for Ladybug. She decides that she must tell Cat Noir the truth but soon realizes that if she does, Cat Noir will want to know why she lied and may figure out that she's Ladybug. Marinette relucantly goes downstairs and after hearing the doorbell ring, answers it with Tom's insistance. Cat Noir greets Marinette, and Tom joyfully lifts and hugs him tight. Sabine reminds Tom to let Cat Noir breathe, so he apologizes and puts the hero down. Cat Noir and Marinette then nervously greet each other with kisses on each other's cheek. Tom takes note of how Cat Noir brought Marinette a pink rose and says that they already know each other well since Marinette adores pink, but Marinette points out that everyone likes pink and Cat Noir reminds him that they don't really know each other all that well. However, Tom calls this love at first sight and drags the two to the dining table. He then presents them with some tasty heart-shaped treats. While Cat Noir eats, Tom asks him if as a superhero, he finds the situation good, surprising Cat Noir and making him choke on his food.

Marinette tells her father that perhaps dating a superhero is too dangerous, but Tom says that it's okay since Cat Noir won't be a superhero his whole life and after he defeats Hawk Moth, he can work at the bakery with them, envisioning how great it would be. Tom then presents a heart-shaped cake, but Sabine suggets that they let Cat Noir say what he wants to say. Marinette agrees and angrily notes how Cat Noir seems to be the type to change his mind fast. Cat Noir thanks Marinette and her parents for the lovely dinner but reveals that he isn't in love with Marinette -- he loves Ladybug. Tom and Sabine are shocked, and Marinette is happy, but not wanting anyone to know, she pretends to be heartbroken and runs up to her room. Cat Noir apologizes for causing so much trouble, thanks Tom and Sabine for the invitation, and leaves. Tom is furious.

Hawk Moth senses how upset Tom is about Marinette getting her heart broken and sends an akuma after him. Sabine tries to comfort Tom and assures him that Marinette will find another boy that she loves, but Tom refuses to allow anyone to break his daughter's heart again. Just then, the akuma infects the rose Tom is holding. Hawk Moth offers Tom the power to protect his daughter from a world of heartbreak in return for Ladybug and Cat Noir's Miraculouses. Tom agrees and is transformed into Weredad, causing a large beanstalk-like vine to sprout from the bakery and trap Marinette on the very top of it. Cat Noir sees the vine and rushes back to the bakery. Tikki also flies up towards Marinette.

Cat Noir apologizes to Sabine, blaming himself for the situation. However, Sabine tells him that it's not his fault and her husband just makes too big a deal out of everything. Cat Noir promises Sabine that he'll bring both her husband and daughter back. Sabine believes that he should wait for Ladybug, but Cat Noir is confident that she'll show up when he needs her, causing Sabine to realize just how much Cat Noir loves her. While Cat Noir climbs the vine in search of Marinette and Tom, Marinette and Tikki look for each other inside the maze of thorny vines Weredad trapped her in. When Cat Noir reaches the top of the vine, he is confronted by Weredad, who is angry to see him again after all the trouble he caused. The villain fights Cat Noir, who insists that he'll save Marinette, though Weredad believes that she is safe from heartbreak. Cat Noir tells Weredad that he didn't mean to hurt Marinette, but Weredad merely says that he's going to hurt him before attacking him, causing the hero to nearly fall off the vine. Cat Noir attempts to climb up to where Marinette is, but Weredad refuses to allow him to save his daughter. Cat Noir tells Weredad that his way of protecting Marinette will only make her lonely for the rest of her life. However, Weredad says that one day, a prince worthy of her will climb up the vine, confront him, and pluck the magic rose to free Marinette.

Marinette and Tikki continue to search for one another but have no luck. Tikki realizes that the thorn maze is magical and prevents them from finding one another. Marinette spots the akumatized rose in the middle of the maze and heads towards it, though there are several obstacles that she must pass first. Meanwhile, Cat Noir continues to battle Weredad but the villain overpowers him. Hawk Moth orders Weredad to grab his Miraculous. Before he does, Marinette reaches the rose and grabs it, releasing the akuma and deakumatizing Tom. With that, the vine begins to fall apart and Cat Noir, Tom, and Marinette all begin to fall. Tikki approaches Marinette, who transforms into Ladybug. She captures the akuma and purifies it. Cat Noir then spots Ladybug and calls out to her. Ladybug assures him that she's coming, but Cat Noir tells him to save Marinette as she's in danger. Ladybug assures Cat Noir that Marinette is safe, which pleases Cat Noir and causes him to comment on how one can't help but fall in love with her. However, he takes it back after noticing that Tom is still upset with him. Ladybug calls on her Lucky Charm and receives a sailboat. Once the three of them are in it, Cat Noir uses Cataclysm on the sailboat's hull. Then, Ladybug and Cat Noir quickly turn it into a glider for the three of them to land safely. Once on the ground, Sabine and Tom run towards each other and hug. Ladybug then uses Miraculous Ladybug to fix all the damage. Tom, Sabine, and Cat Noir then all run upstairs to check on Marinette, even though Ladybug tries to tell them that she's safe. Quickly she rushes to her bedroom and detransforms before they arrive.

Tom is happy to see his daughter safe and hugs her, noting how sad she had been because of Cat Noir. Noticing how angry her father is getting, Marinette tells him to calm down and then tells Cat Noir that Ladybug is lucky to have someone like him love her and says that they can still be friends. Cat Noir is relieved that Marinette isn't heartbroken and hugs her, calling her an amazing girl even though she isn't his number one fan. Marinette is surprised that Cat Noir thought she was his number one fan, which Cat Noir tells her is what he'd assumed when he saw her on the balcony. Sabine tells Tom that Marinette can handle her own heartbreaks and Tom forgives Cat Noir, though he does ask him if he's sure he doesn't want to work in the bakery with him, much to Marinette's annoyance.