Vic Mignogna (/mɪnˈjɑːnə/) is an American voice actor and musician known for his prolific work in the anime industry and video games industry, the most notable role being Edward Elric in the English dub of the Fullmetal Alchemist series, for which he earned the American Anime Award for Best Actor in 2007. He is currently busy with Naruto and Dragon Ball dubbing projects, as well as formerly providing the voice for Qrow Branwen from the Rooster Teeth webseries, RWBY. He has done some live-action work, but is mostly known for his animated work. He voices Jalil Kubdel/The Pharaoh in the English dubbed version of Miraculous: Tales of Ladybug & Cat Noir.

Mignogna grew up in Greensburg, Pennsylvania. He graduated from Liberty University with a degree in television and film production. He helped produce and arrange some of the songs on DC Talk's eponymous first album. Mignogna taught drama and speech in Jacksonville, Florida, and was an officer with the Ocean City Police Department. In 1990, he moved to Houston, Texas, where he was a film and video production instructor at The Art Institute of Houston. In 1993, he was a contestant on American television talent show Star Search, on which he sang "Worth Waiting For". 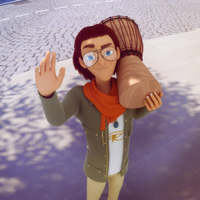