Two Parters are composed of 2 back-to-back episodes that feature important and impactful story arcs. Episodes within a Two Parter belong to a specific season, and because they are connected, the first part always ends in a cliff hanger. The second part is always a direct continuation of the 1st part.

Note: To see additional information of each individual episode such as their trivia, transcripts, galleries, airdates, and credits, please visit their individual pages. This page is only a summarization of each 2-parter. 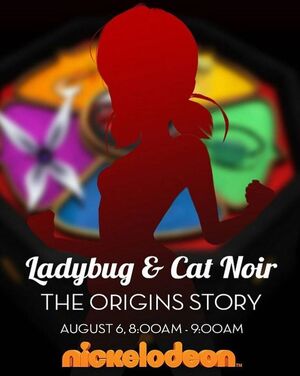 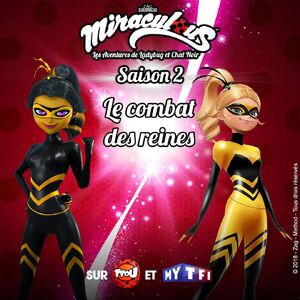 It's Fashion Week and all of Paris has a rendezvous at Gabriel Agreste's fashion show, during which Adrien will wear a hat created by Marinette. For the occasion, Audrey Bourgeois, Chloé's mom and the international queen of fashion, is passing through the capital. But, manipulated by Gabriel/Hawk Moth, Audrey gets akumatized and becomes Style Queen, the most chic villain of all!

Armed with her scepter, she transforms people into statues of glitter and plans to do everything in her power to prevent Gabriel's show from taking place, starting by attacking Adrien.

Without the support of Cat Noir, Ladybug is getting ready to call on a new superhero to help her, but she loses the Miraculous she wants to entrust to them...

Will Ladybug manage to stop Style Queen and recover the Miraculous before it falls into the wrong hands?[3] 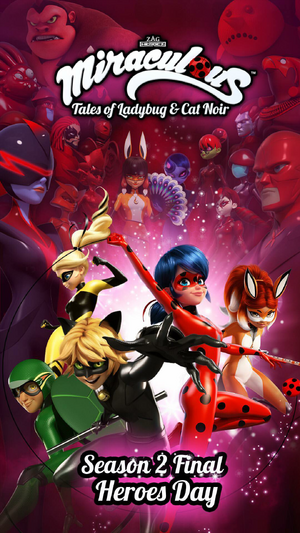 It's Heroes' Day in Paris and everyone must prepare a good action for others. Bogged by her activities as Ladybug, Marinette did not have time to prepare hers. For fear of disappointing her friends by announcing that she has not prepared anything, Marinette lies to them and finds herself quickly overcome by her own lie. Her nightmare is just beginning...

Hawk Moth has akumatized his assistant Nathalie into Catalyst, a supervillain that will allow him to put into action the plan he's been concocting for a long time, that will finally make it possible to defeat Ladybug and Cat Noir.[8] 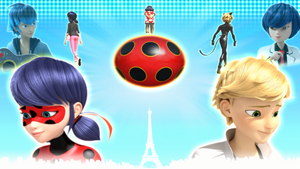 Marinette helps Adrien and Kagami escape a ceremony organized by the Bourgeois couple for their 20 years of marriage. The 3 friends have fun until Marinette, seeing Adrien and Kagami together, decides to leave them alone, sacrificing her feelings for the one she's always loved.

But during this time, the Bourgeois anniversary turns sour and the couple gets akumatized.

Now Heart Hunter, a floating head with two faces constantly fighting each other, they devour all love in Paris.

Overpowered by this powerful villain, Ladybug seeks the help of Master Fu. But still upset about her love sacrifice, she makes a mistake that will prove disastrous...[9]

Having understood that her cautiousness is the reason why Ladybug is always triumphing, Shadow Moth prepares a diabolic plan which consists of creating a supervillain able to make his victims take all sorts of risks. When Marinette finds out that Adrien is leaving Paris for a few weeks with Lila, the new figure of the Agreste brand, she’s ready to do anything to prevent him from doing so; but to what point? Would she reveal her secret identity for the sake of love? And would Adrien take the risk of finally confronting his father?[10]

Português do Brasil
Community content is available under CC-BY-SA unless otherwise noted.
Advertisement