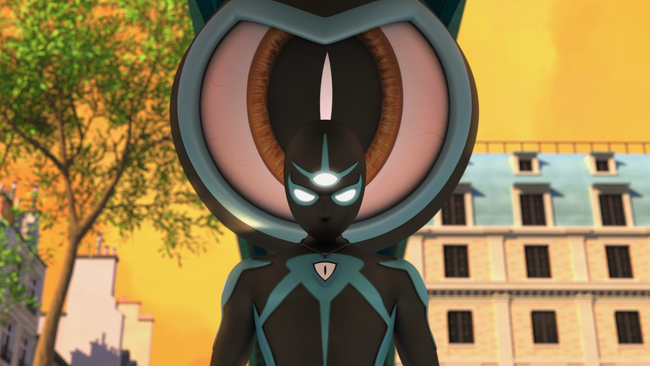 A friend of Marinette's gets akumatized into Truth; using his power to force people to tell the truth, he wants to know Marinette's secret.[5]

The episode starts with Nathalie's voice being heard in the background, describing the process required to fix the Peacock Miraculous, and Gabriel Agreste in his lair following the instructions as they are heard. He pours dust of meteorites into molten gold, then adds a Peacock Feather, and later injects it into the Peacock Miraculous and commands, "Miraculous, Repair Yourself". After the Miraculous is fixed, a joyful Duusu comes out of it to see Nooroo, questioning where Nathalie was. Nooroo explains what’s going on and Gabriel fuses the Butterfly and Peacock Miraculous and transforms into a more powerful version of Hawk Moth - Shadow Moth.

Meanwhile, Marinette asks Tikki if every kwami is inside the Miracle Box. Tikki explains to Marinette that all the Kwamis are in the Box except Duusu and Nooroo. Marinette then presses a button on top of the box and all of the Kwamis break out of the Miracle Box and messes around with all her stuff. When Marinette asks Tikki why they're out of the box, Tikki says that now that she's the Guardian, the Miracle Box is in her likeness. The Kwamis continue to cause mischief; Mullo takes away Tikki's hat that Marinette made for her, Trixx reads Marinette's diary which Marinette snatches quickly, while Daizzi is jumping on her lamp's button to see the lamp turn from "day" to "night". Ziggy listens to the sounds coming from Marinette's phone, and Kaalki breaks out of the room looking at the cars questioning why there aren’t any horses pulling carriages, causing a little boy and his mother to see her, while Marinette grabs her and tells to them she's a prototype of a talking plushie.

Both Stompp and Xuppu jump on Marinette’s keyboard causing it to go to the news where Nadja Chamack is talking about Prince Ali. Marinette then receives a video call from Alya, Mylène, Juleka, and Rose while Marinette is still trying to catch the Kwamis. After accidentally accepting the call, she asks for their opinion on her new "plushie" but since Kwamis can't be seen through technology, they can't see them. Rose asks Marinette to show the new plushies. Marinette (while still trying to catch the Kwamis) says that she has no idea about the "plushies". Alya tells Marinette that she is acting stranger than usual, and Marinette replies saying she's doing a new type of excerise. Alya thinks Adrien is at her house, but before answering her question, Ziggy (who has Marinette's phone) gets a call from Luka and drops Marinette's phone onto her keyboard, which hangs up the video call.

Marinette and Luka go on a date to see Jagged Stone's movie, after she missed the one they had planned yesterday. However, when they are about to kiss, it is interrupted by Mr. Pigeon being akumatized with his birds representing an airplane dropping bombs on random locations. Marinette lies to Luka that a train is up there and says she'll get more snacks, just to go to the bathroom to transform into Ladybug.

As Ladybug, she receives a voicemail from Cat Noir, who sneaks up behind Ladybug, causing her to accidentally throw him off the roof just in time to catch him. Ladybug tells Cat Noir to stop with the pranks before apologizing for missing their planned duty from earlier. After de-akumatizing Mr. Pigeon again, Marinette rushes back to the theater with Luka, only to discover that the movie has already finished.

Next, they head to André's ice cream stand, but Marinette sees Lollipop Boy and has to leave him so she can transform. The next day, after school, Marinette and Luka go on a bike ride until Marinette sees an akuma, causing her to postpone her bike trip back home. At the Couffaine boat, Luka plays a song for Marinette alongside the rest of Kitty Section, but Marinette is not there on time. Despite Marinette arriving just as the performance begins, Luka has run out of patience. After the performance, Luka tells Marinette that he never knew his father ever since he was born, and he wants to know where Marinette runs off to. When Marinette tells him that she can't tell the truth to him, Luka is heartbroken, causing him to be akumatizing into the villain Truth by Shadow Moth with the help of his Sentimonster, Light Eye, after the akuma and amok possess his Guitar pick necklace.

While Marinette transforms into Ladybug, Truth asks Alya what Marinette’s biggest secret is, which she believes to be her crush on Adrien. Truth, believing that that is not a secret since everyone knows that, attacks and asks others on the Liberty, who all say the same thing. Ladybug arrives just in time to stop him, and tells Cat Noir that Hawk Moth had fused the Butterfly and Peacock Miraculous through voicemail. Unfortunately, Truth blasts Ladybug into telling her who she really is, but Cat Noir also arrives just in time to prevent Truth from revealing Ladybug’s secret. After saving Ladybug, Cat Noir lends his belt to her to use as a gag to wrap over her mouth to prevent her revealing anything about herself.

After seeing Anarka approaching with a tray of sandwiches, Truth blasts her with his truth ray, demanding who his real father is - Anarka reveals that it is Jagged Stone. Truth is left stunned and goes to confronts Jagged to know the real reason why he left his mother, him and Juleka. Truth, Ladybug, and Cat Noir head to Le Grand Paris, with Truth asking Jagged Stone if he is his real father, and after confirming that he indeed is, a flabbergasted Truth demands why he abandoned him. Jagged explains that he thought he wouldn't be a good father, so he left to pursue his music career. Upset by this, Truth throws Jagged off the roof, with Ladybug and Cat Noir rescuing him, telling him to stay low until Truth is defeated.

Truth breaks into Marinette’s bedroom to continue the search for her secret. The Kwamis hide inside the Miracle Box, terrified by what could potentially happen. When Truth almost discovers the Miracle Box, Ladybug and Cat Noir arrive again just in time to stop him, Ladybug muffles to Cat Noir pointing towards Truth’s akumatized object as another fight ensues, with Truth trying to get Ladybug to reveal her true identity after the belt is removed from her mouth, but Cat Noir keeps interrupting his questions by asking different ones. He gets Ladybug to summon up her Lucky Charm, which appears as a roll of aluminium foil this time. She uses it to wrap the parasol, then, she throws a folding screen at Light Eye, causing him to be unable to use its power. Cat Noir then uses Cataclysm on Light Eye, but it doesn’t disintegrate - its body cracks and goes beserk instead. Ladybug jumps on Light Eye, shining its light to immobilise Truth. Ladybug breaks his necklace, releasing the akuma and amok. She captures and purifies them, and summons the Miraculous Ladybug, sending everyone's lips back to there regular forms.

After the fight, Ladybug and Cat Noir jump on a rooftop and decide to talk. Cat Noir says that he had a lot of fun, in which Ladybug wonders what his other days are like. Ladybug tells Cat Noir that Shadow Moth will never win, and to not overdue his jokes. After a long evening of fighting crime, they depart.

After she detransforms, Marinette meets up with Luka and says that she doesn’t want to lie to him and breaks up with him, due to being busy with her Ladybug duties and is not able to date someone unless Shadowmoth got defeated. Luka forgives her and he hugs her,and says that he'll always be there for her when she's ready to be with him again. As Luka walks home to the Liberty, Jagged Stone is there waiting for him, which surprises Luka. Jagged hugs him, saying that he's sorry for walking out on him, is more than willing to be with Luka now. When Marinette gets home, she lays on her bed and cries about the fact that Hawk Moth is more powerful than ever, and that she can’t have a boyfriend. The Kwamis hug Marinette, comforting her, ending the episode.