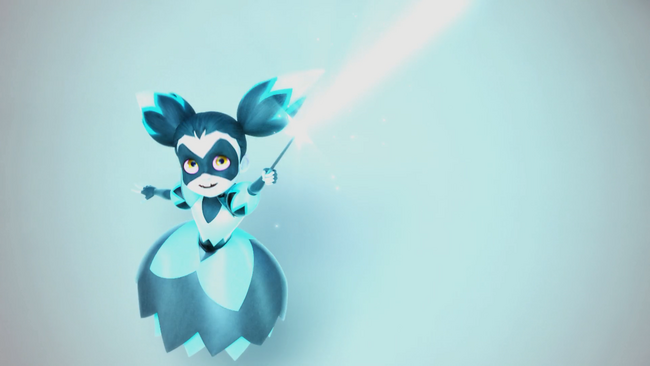 A misunderstanding while babysitting Manon leads to a young girl becoming akumatized as the Puppeteer.[6]

Marinette babysits little Manon, who becomes akumatized into the Puppeteer while playing with dolls of Ladybug, Cat Noir, and some infamous villains.

A babysitting mishap occurs and results in a little girl becoming the Puppeteer, a villain who covets controllable doll versions of Ladybug and Cat Noir.[7]

Marinette is babysitting Manon in her bedroom, playing with plush dolls of Ladybug, Cat Noir, Lady Wifi, the Evillustrator, and Rogercop. Marinette tells Manon about how the villains came to get their powers, and what motivates them. They were ordinary people in Paris who, for one reason or another, became very upset. An even more powerful villain named Hawk Moth gave them superpowers on the condition that they give him what he wanted — the Ladybug Miraculous and Cat Miraculous, two magical pieces of jewelry belonging to the superheroes. Marinette explains that if this were to happen, the bad guys would win.

However, the heroes always triumph, and when their game of imaginative play comes to the same conclusion, Manon asks to play as Ladybug and Cat Noir, but before they can, Manon's mother, Nadja Chamack, arrives to pick her daughter up.

Ms. Chamack instructs Manon to return the doll, to the little girl's dismay. When her mother tries to take it back, the doll's arm rips. Marinette assures the Chamacks that she can fix it, and says good-bye to them. Just then, Ms. Chamack's phone rings. Her co-worker, Alec Cataldi, needs her help. While her mother is distracted, Manon returns to Marinette's room and again pleads for the doll. Unable to resist Manon's cuteness, Marinette lets her borrow the plush Lady Wifi. Nadja calls for Manon, telling her that they have to stop by KIDZ+ TV station. Tikki remarks that it is a good thing none of the villains are as cute and manipulative as little Manon.

Manon waits for her mother in the reception hall of the TV station, playing hero and villain with the toy Lady Wifi and a magazine cover picture of Ladybug. When Nadja notices her daughter playing with Marinette's doll, she believes her daughter took the doll without Marinette's permission and scolds her and punishes her for disobedience by taking the doll and directing her daughter to stay in place until she comes back from her errand.

This angers Manon and catches the attention of Hawk Moth. Elsewhere in Paris, Marinette and Alya rush to the train station, ready to spend the afternoon at the bookstore and movies. The girls spy on Adrien boarding the train as well, and as per usual, Marinette is frozen in place. Alya has to drag her friend into the train. Marinette attempts to figure out a plan to talk to him but has little success.

Hawk Moth sends an akuma after Manon, which lands on her toy fairy wand. Hawk Moth contacts Manon, calling her Puppeteer, and explains her powers to her that she can use Marinette's dolls to control their real-life counterparts, heroes, and villains alike. Recognizing him from the stories Marinette tells her, Manon sees her chance to be the winner of the game and agrees, and she is akumatized into the Puppeteer. Puppeteer begins by stealing back the Lady Wifi doll and using her powers on it.

On the train, Marinette, Adrien, and the rest of the passengers watch in horror as Alya is re-akumatized. The villainess then demands that Marinette gives her the dolls. Marinette notices that Lady Wifi is speaking less like herself, but more like a very young girl. Confused, Marinette tries to reason with her friend and tells her that she does not have them. This only prompts Lady Wifi to summon a fast-forward icon and ride it out of the subway station and to Marinette's house.

Having seen the whole thing through the window, Adrien leaves the train and tells the conductor to investigate a cat that is loose on the tracks. Once he leaves, Plagg transforms Adrien to Cat Noir. Elsewhere in the station, Marinette and Tikki are about to do the same thing, but Cat Noir finds her first, asking for information. Marinette explains that Lady Wifi was acting like a young girl she babysat and had left to get a set of dolls the child wanted. Marinette gives Cat Noir her address, and once he has left, Tikki transforms the girl into Ladybug.

The heroes find each other at the Dupain-Cheng house to catch Lady Wifi in the act of stealing the doll replicas of Ladybug, Cat Noir, the Evillustrator, and Rogercop. Recalling how they defeated Lady Wifi last time, Ladybug tells her partner to knock out the wifi signal while she fights Lady Wifi. Cat Noir uses his Cataclysm to destroy the antennas, but when Ladybug smashes open the signal-less phone, no akuma comes out. Lady Wifi retreats, but not without three of the dolls, with the exception of Ladybug. The heroine recounts this to her partner, and they realize that Manon must have been akumatized and is using the dolls to control Lady Wifi, and now has the means to control three more people, including Cat Noir. To make matters worse, Cat Noir's transformation is about to wear off, having already used his Cataclysm. He runs off to feed Plagg.

Ladybug arrives at KIDZ+, and asks Ms. Chamack about Manon. When she finds that her daughter is not in the waiting hall, Ladybug checks the security footage to find that the Puppeteer, Lady Wifi, and three plush dolls are on the soundstage. The heroine instructs the adults to evacuate, assuring Ms. Chamack that she will save her daughter.

Cat Noir returns and the heroes run to find the child villain before she can cause any more harm. However, they arrive to find that she has already summoned Nathaniel and Roger as their villain personas and promptly does the same to Cat Noir. Realizing that the akuma must be in the girl's toy wand, Ladybug attempts to retrieve it, but is outnumbered five to one. Forming a plan, Ladybug takes her cloth counterpart, and roll of duct tape, and flees to the roof.

Deciding to handle the puppet villains first, Ladybug shines a huge spotlight on their faces, temporarily blinding them. She uses the duct tape to tie the hands of Evillustrator and Rogercop, who rely on their hands. She then throws the Ladybug plush off the building so the Puppeteer will send Lady Wifi to fetch it from the Eiffel Tower. When she successfully does and hands it to her mistress, Ladybug counters by summoning her Lucky Charm. This time, it provides her with a power strip. While she ponders what to do with it, Rogercop and the Evillustrator escape, allowing the latter to erase her hiding spot. A fight ensues with Ladybug using the power strip as a second yo-yo to dodge Rogercop's handcuffs, Lady Wifi's pause icons, and the disks drawn by the Evillustrator. When Cat Noir advances with his staff, Ladybug ties his foot in her yo-yo and knocks him over.

She proceeds to deflect the villains' attacks at the others and pauses the Puppeteer just as she is about to activate the Ladybug doll. She breaks the wand, cleanses the akuma, and throws the power strip into the sky, repairing all of the damage caused by the fight and changing Manon, Alya, Nathaniel, and Roger back into themselves. None of them have any memory of what they did as puppets, including Cat Noir. Once again, Hawk Moth is angry that the heroes have bested him, while Ms. Chamack is relieved to see that her daughter is all right. Ladybug dashes away.

Later, at the Dupain-Cheng house, Marinette apologizes to the Chamacks for letting Manon take the doll without her mother's permission. Ms. Chamack understands and leaves her daughter under Marinette's supervision. Manon asks to play with Ladybug and Cat Noir, but Marinette instead suggests they go to the zoo instead and Manon agrees in the end.