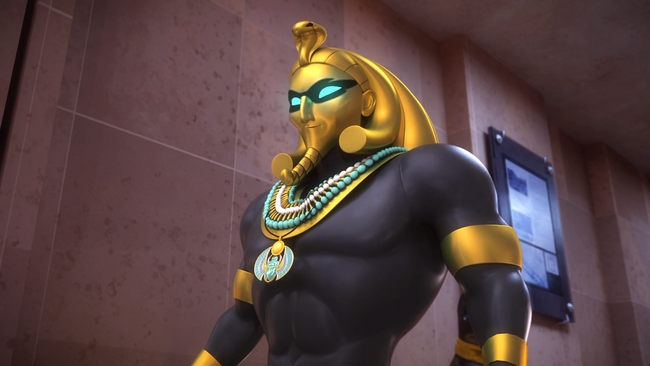 When a villain with the power of the Egyptian gods wants to sacrifice Alya, Ladybug and Cat Noir must fight an army of mummies to rescue her.[6]

Marinette is watching Alya's new blog update. Alya is tracking Ladybug when she passes by, hanging onto a helicopter, dropping her history textbook in the process. Alya picks it up, identifying it as a 10th-grade history textbook, thus announcing her belief that Ladybug's secret identity may be that of a student.

Marinette panics since Alya will know something's up if she asks to borrow her history textbook. Tikki tells her that what's done is done; that she can only keep looking ahead; and that, if she wants to keep her identity secret, she needs to get the book back from Alya. Tikki then types on Marinette's computer and brings up a web page about an exhibit at the Louvre on the Pharaoh Tutankhamun. Tikki urges Marinette to invite Alya to the museum and to have her to bring the book with her. Marinette is skeptical, not understanding what King Tut has to do with Ladybug, but Tikki promises that the trip will be worth it.

Marinette ends up telling Alya that she found something about Ladybug at the King Tut exhibit, so they go to the Louvre. Alya excitedly talks about how close she is to finding out Ladybug's identity, as their school is the only one that uses this particular history textbook, and there are only 43 girls in their grade, excluding herself. Marinette tries to exclude herself from the suspects list, but Alya points out that Marinette had to borrow her textbook yesterday. Panicked, Marinette makes the excuse that she'd forgotten her own book at home and that Alya knows how she always loses or forgets things. Alya just laughs and says she was teasing. Marinette will be off the suspects list when she brings her book to school.

As the girls reach the King Tut exhibit, a young man shoves past them and drops a bunch of papers and a necklace, which, thankfully, hasn't broken. He introduces himself as Jalil Kubdel, their classmate Alix's older brother, before running off to greet his father, Mr. Alim Kubdel. Shrugging at his odd behavior, Alya turns back to Marinette and asks why she brought her here and what this has to do with Ladybug. Marinette tries to stall, and Tikki points her over to a papyrus scroll on the wall in the corner. Unfortunately, the scroll is covered in hieroglyphics without a translation. Marinette tries to find something that's relevant to Ladybug before Alya loses interest.

In his room, Adrien is on the Ladyblog, watching the video of Alya finding the history book. He, too, wonders if Ladybug goes to his school. Plagg doesn't understand why humans crush on each other instead of cheese. Adrien replies that girls smell better than cheese, much to Plagg's annoyance.

Meanwhile, Jalil and Mr. Kubdel join Marinette and Alya in front of the scroll as Jalil explains the images on the scroll. He identifies a man holding a scepter as Pharaoh Tutankhamun I and the woman next to him as Princess Nefertiti with one hundred mummies surrounding them. The Princess died before the Pharaoh did and became the Sun God, Ra's wife in the afterlife. Mr. Kubdel remarks that he already knows all this since he organized this exhibit. Jalil then claims to have deciphered the hieroglyphs, theorizing that the images on the scroll depict a resurrection ceremony in which the pharaoh tried to bring his princess back from the afterlife and that the scroll contains a spell to bring people back from the dead.

Marinette remarks that, like Alya, Jalil is prone to jumping to conclusions. Likewise, Mr. Kubdel is unconvinced and cautions Jalil that anything written in the scroll is a legend and cannot be interpreted so literally. Jalil insists that he is right and suggests proving his theory by using the pharaoh's scepter--on display nearby--and reading a spell from the scroll. Having lost his patience, Mr. Kubdel yells at Jalil for treating the scepter like a toy instead of a priceless historical artifact. He leaves, telling Jalil to stop with his wild theories and start focusing on the real world. In his lair, Hawk Moth senses Jalil's dejection and sends an akuma his way.

While Marinette stalls, Alya grows bored and takes the book out of her bag. Before she can open it, Marinette jumps in and puts the book away, insisting that she's found something about Ladybug. Outside the museum, the akuma finds Jalil and lands on the pendant around his neck, transforming him into The Pharaoh and giving him the ability to harness the powers of the Ancient Egyptian gods.

Transforming into Thoth, The Pharaoh creates bubbles and traps several museum visitors and security guards inside them, slowing down their perceptions of time. Alya and Marinette duck behind some displays, the history textbook falling out of Alya's hands in the process. Alya begins livestreaming everything with her cellphone while Marinette sneaks off and transforms into Ladybug. Back home, Adrien is watching Alya's feed and transforms into Cat Noir when he sees The Pharaoh stealing the scroll and scepter.

Ladybug dives into the Egyptian exhibit room as the museum's security doors come down, trapping her, The Pharaoh, and Alya. She tries to fight the Pharaoh, but he grabs her yo-yo and swings her into a wall. He then transforms into Sekhmet and uses his enhanced strength to pull apart the bars of the security door. Cat Noir arrives, but the Pharaoh easily defeats him by throwing him into a sarcophagus. He then notices Alya hiding behind a display and kidnaps her, taking the scroll and scepter and pulling the bars back in place behind him.

Ladybug and Cat Noir escape the room by using Cataclysm on the bars, and Cat Noir goes to recharge his Miraculous. Ladybug uses her yo-yo to access the Ladyblog, where Alya has been livestreaming her abduction. Outside the museum, The Pharaoh uses Anubis' powers and transforms all the bystanders into mummies. At Alya's questioning, he explains that he needs one hundred mummies and a sacrifice (a soul pure of heart) to resurrect his Princess. He reveals that he plans to exchange the Princess's soul for Alya's (because she looks like the person being sacrificed in the pictures on the papyrus scroll) to appease the Sun God, Ra.

Hearing this, Ladybug runs to rescue Alya but accidentally gets trapped in one of the time-warping bubbles. Cat Noir returns and pops the bubble, and they run to the roof to witness the resurrection ceremony in the courtyard. Alya, still being held hostage, notices a figure in a spotted dress on the scroll who seems to be swinging a yo-yo. When she questions The Pharaoh, he explains that the goddess on the scroll is Ladybug, who had thwarted the original Pharaoh's resurrection ceremony 5,000 years ago.

The Pharaoh recites the spell and a beam of energy shoots up from the Louvre Pyramid, opening a portal in the sky. The mummies grab Alya and begin carrying her toward the pyramid, but Cat Noir distracts them while Ladybug swings in on her yo-yo and carries Alya to safety on a nearby rooftop. With Alya's help, Ladybug realizes that the akuma must be in the necklace. However, the Pharaoh transforms into Horus and flies up and captures Alya again, dropping her onto the beam on top of the pyramid to be transported into the portal.

The mummies attack Cat Noir, but he and Ladybug trap them in a bus. Ladybug then ties her yo-yo around the Pharaoh and manages to grab the necklace from around his neck when he's flying. It falls to the ground, but he retrieves it before she or Cat Noir can. Just as Alya is about to disappear into the portal, Ladybug uses Lucky Charm, and a Ladybug costume falls out. She spots the pair of earrings that come with the costume. She then bargains with the Pharaoh, offering herself as a sacrifice in Alya's place, with the reasoning that Pharaoh can finally have his revenge on Ladybug for stopping him the first time 5,000 years ago. The Pharaoh agrees and releases Alya, placing Ladybug on the beam to the portal.

The Pharaoh holds out his hand for Ladybug to give him her Miraculous, but she grabs his necklace and throws the toy earrings from the Ladybug costume to the ground, telling him to go fetch. When he is distracted by the decoy, Ladybug destroys the necklace and catches the akuma. After that, she purifies the akuma, and with the help of her Lucky Charm, Ladybug then returns everything back to normal. After that, the Pharaoh transforms back into Jalil.

Ladybug returns Alya's phone to her, and Alya asks her how old she is. To throw Alya off Marinette's trail, Ladybug replies that she's definitely "much older than a high school student." Cat Noir asks Alya if she wants to know how old he is. She replies that she will know "in a sec", referring to him detransforming. Cat Noir looks at his ring and runs off. Alya giggles.

When Alya wanders back into the museum to the King Tut exhibit, Marinette makes the excuse that she was turned into a mummy. Alya is happy to have learned that Ladybug is 5,000 years old, but she's confused because the history book in her bag has disappeared. As Alya searches for the book, Marinette keeps walking and giggles to herself.

Later that night, Tikki explains that she is actually much older than 5,000 years. There has always been a Ladybug superhero, and Tikki is the kwami who has watched over every Ladybug since the beginning. Marinette wonders if the other Ladybugs were as klutzy as herself. Tikki replies that every Ladybug is different, but Marinette is surprising, unpredictable, endearing, talented, a quick learner, and the cutest Ladybug. The episode ends with Tikki telling Marinette to get some sleep because she has a history test tomorrow. Marinette quips that at least her test is about ancient Egypt.