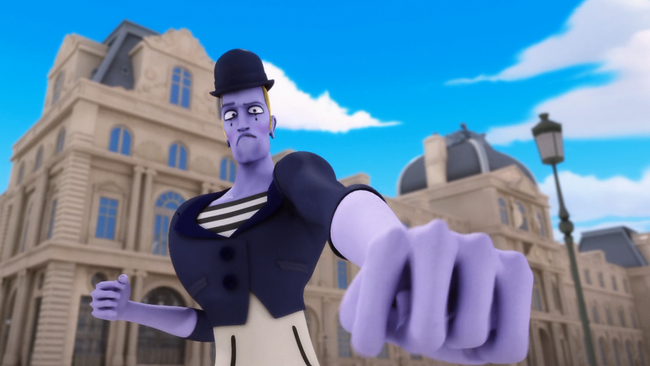 When Mylène's father loses a part in a play to his scheming understudy, he akumatizes into the Mime, a villain whose pantomimes become real.[6]

The episode begins with Ladybug rushing home before the last dot on her earrings disappears, and she transforms back into Marinette. By the time she lands on her balcony, she detransforms. As Marinette and Tikki walk into her room, Tikki comments that what Ladybug did for Alya earlier was very cool. They pause when they hear Sabine's voice from downstairs, telling Marinette that Alya has arrived.

Back on Marinette's roof, Alya explains what happened earlier, showing the video of Ladybug saving a child and giving a brief interview for the Ladyblog over the other reporters. Alya is very happy that Ladybug knows about her blog. In the background, Marinette's pigeon imitates Alya's movements. She then leaves to get her laptop. When Tikki asks to see the video on Alya's phone, the phone slips out of Marinette's hand, Marinette presses buttons while trying to catch it and accidentally deletes the video. Marinette freaks out over how Alya is going to kill her when she finds out. Tikki tries to reassure her that Alya wouldn't kill her best friend, but that doesn't prevent Marinette from imagining what despicable things would happen if she tells Alya.

Alya pops up to the roof, telling Marinette that she has visitors. They return to Marinette's room, finding Sabine, Mylène, and Fred Haprèle, Mylène's father. Mylène explains that her dad is getting his first major performance in The Mime's Extraordinary Adventures at the Eiffel Tower. The Haprèles came to pick up Fred's hat, which Marinette was fixing. She added a small pocket inside, per Fred's request. As a form of thanks, he mimes taking the hat out of a box, Marinette playing along. Fred puts a photo of his daughter in the pocket just as Sarah, his manager, calls and tells him that he needs to be on the bus for the show immediately. Fred then leaves the bakery.

Meanwhile, Chris and Sarah are about to board the bus for the show. Sarah tells Chris that he needs to be ready to take Fred's place in case something happens, unaware that Chris has a plan to sabotage Fred.

At the bakery, Mylène is about to leave when Alya's phone rings. Marinette has Alya's phone in the purse, trying to find a way to fix her problem. After checking her phone and realizing it's her mother, Alya asks Mylène if she wants to watch the video she recorded earlier, but Marinette quickly reminds them about Fred's premiere. Alya suggests that she'll show Mylène the video on the way, so Marinette sneakily snatches her phone out of Alya's purse when they leave.

Meanwhile, Fred gets a call from Chris that there's a "last-minute location change". The bus actually picks them up in 10 minutes, in front of the Louvre, so he leaves.

In Marinette's room, Marinette decides to transform into Ladybug and film herself doing the exact same thing at the exact same place, planning to then return Alya's phone without the latter realizing it was even gone.

While that happens, Chris tells Sarah that they have to get to the Eiffel Tower for dress rehearsal since Fred didn't show up. The play director explains that Chris will be taking Fred's place that night, much to the latter's pleasure. Fred arrives at the Museum and seems confused to where the bus is. He calls Sarah, and she angrily informs him that since he didn't show up, Chris will be the lead instead. Fred feels upset that he's been tricked and his daughter will be disappointed in him. Hawk Moth senses Fred's sadness and sends an akuma after him.

Back at the Louvre, Ladybug is trying to redo Alya's video, but a cat knocks the phone into the trash, much to Ladybug's disgust. Nearby, the akuma possesses Fred's photo of Mylène. Hawk Moth then offers Fred the chance to destroy the premiere performance and have his revenge on Chris, resulting in him being akumatized into the Mime. The Mime first cuts the posters for the show with his invisible sword, before he mimics a golf club to knock off a police car. Ladybug notices this and tries to calm him down, but the Mime fires invisible arrows towards her instead.

A couple miles away, Adrien is in his car with Nathalie and Adrien's bodyguard. Suddenly, the Gorilla sees Ladybug and hits the brakes. They knew that a supervillain is attacking them, so Adrien, Nathalie, and the Gorilla run off to hide. Adrien then turns into Cat Noir to help Ladybug.

Meanwhile, the Mime still throws arrows at Ladybug. Then he takes out an invisible bazooka. Ladybug avoids it. The Mime later mimics a whip and uses it to grab Ladybug. He's about to get her Miraculous, but Cat Noir arrives just in time to stop him. After he traps both Cat Noir and Ladybug in an invisible cage, Ladybug sees the Mime mime a car and rides away. She realizes that if he started another pantomime, the previous one would evaporate. So both Ladybug and Cat Noir follow the Mime and his invisible car.

Once they land on top of the roof, the Mime escapes and mimes an invisible motorcycle. As he drove away, Cat Noir uses his staff to carry himself and Ladybug to find the bus for the theater troupe. As soon as they landed on the roof of the bus, Ladybug uses her yo-yo to make a net so she can stop the Mime. He dodges the net and jumps on the bus. While Cat Noir and the Mime are sword/staff fighting, Ladybug tries to grab the Mime's hat to get the akuma. However, he notices and attacks her, and Cat Noir knocks the Mime off the bus. Ladybug grabs the Mime's hand. But before the Mime can grab her earrings, Cat Noir grabs Ladybug and pulls her up.

The Mime attacks her, but he falls off the car. He mimics a chainsaw to saw the ceiling of the car and tells the driver to drive faster. Ladybug knew that she has to get the passengers to safety. So while Cat Noir covers for her, Ladybug warns everyone in the bus about the attack and that the Mime seems to be after Chris. Outside, the Mime throws an arrow at one of the bus' wheels, making it go out of control, but Cat Noir stops the bus just in time before it crashes. Chris feels guilty about what he has done and tells Sarah the truth about what he did to Fred.

Outside, Cat Noir is about to lose the fight with the Mime. He is about to take the ring from Cat Noir, but Ladybug ties his hand with her yo-yo. The Mime then mimics a bomb and throws it at Ladybug and Cat Noir. So Ladybug uses Lucky Charm, and a shoe box appears. Using her lucky vision while Cat Noir and the Mime continue to fight, Ladybug makes a projector out of the box, Sarah's glasses as a magnifying glass, a Mime poster, and a car's light. The Mime sees the poster projection and gets angry. He mimics a sword and cuts the "poster" in half. But that's before he realizes that he had sliced the Eiffel Tower in half instead. He sees it's falling and mimics a shield to stop it. Ladybug knew that her plan has worked.

Once Cat Noir uses his staff to get the Mime's hat, Ladybug grabs it and looks for the picture of Mylène. She tears the photo in half, revealing the akuma. Ladybug catches the akuma and purifies it. She then tosses the shoe box and cleanses the city, returning everything, including Fred, back to normal. Chris apologizes to Fred for tricking him earlier, and Fred forgives him.

Ladybug transforms back into Marinette, runs back to the Louvre, and grabs Alya's phone out of the trashcan. She then goes to the Eiffel Tower for the Mime show. After taking a seat next to her friend, Adrien joins them, much to Marinette's delight.

Once the show is over, Marinette finally confesses to Alya about what happened to her phone and the video. She apologizes for deleting the video and tries to fix it for her, and she forgives her because it turns out that Alya had uploaded the video on the Ladyblog before she showed it to Marinette.

After the two best friends hug, Marinette said to her that there's a surprise inside the theater. When Alya goes inside, she meets Ladybug and starts interviewing and recording her for her blog.

After the interview, Marinette quickly transforms back to herself and stands outside. When asked if she would see the interview video, Alya playfully teases her to not accidentally delete it until she uploads it to the blog.