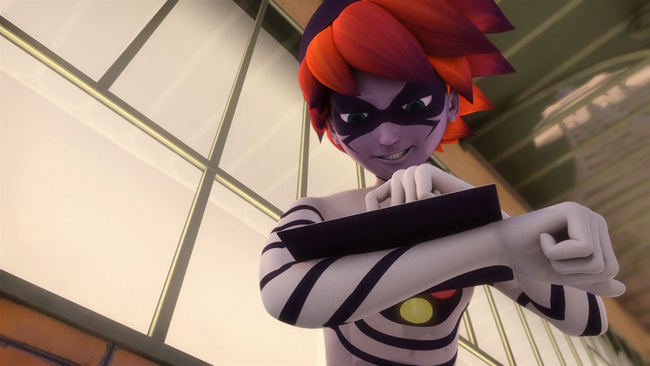 A student with a crush on Marinette is akumatized into the Evillustrator, a villain that Cat Noir must face without Ladybug.[7]

Marinette is attacked by both Stormy Weather and Lady Wifi at Collège Françoise Dupont. Lady Wifi pauses her and Stormy Weather freezes her in an ice block. The two supervillains clasp hands, pleased with their success. Suddenly, a new superhero drops into the scene and uses his tablet to erase Stormy Weather's umbrella. As Lady Wifi moves to pause him, he traps them both in a box. He frees Marinette, erasing the ice and the pause button. Marinette runs to the superhero, calling him "Super Nathan." She confesses her love to him and he does the same in return.

This, as it turns out, is Nathaniel's imagination running wild. He is doodling a comic in Ms. Mendeleiev's class and Ms. Mendeleiev notices. She stops him from drawing and sends him to the principal's office, disgusted with his endeavours. Nathaniel trips over Mylène's backpack, spilling his bag and everything in it, including his comic book. Chloé picks up the book and makes fun of both him and Marinette to Sabrina, knowing the rest of the class will overhear. Ms Mendeleiev picks up Nathaniel off the floor and tells him to go to Mr Damocles' office. Nathaniel takes his book back from Chloé, but Chloé rips out the last page.

Hawk Moth, sensing Nathaniel's emotions, sends an akuma to Nathaniel and it lands in his stylus. Hawk Moth offers him power so long as he retrieves a couple of items he is missing. Nathaniel accepts, becoming the Evillustrator.

Back in Ms Mendeleiev's classroom, Ms. Mendeleiev announces the groups for the particle physics research presentations. Nino, Adrien, and Alya are partnered together, as are Chloé, Sabrina, and Marinette. Chloé complains, wanting to work alone with Sabrina, but Ms. Mendeleiev tells her to deal with it. Alya isn't willing to switch places with Marinette, but she is willing to be Marinette's wingwoman in regards to Adrien. The class is dismissed and the students wander the school, gathering their things and moving to their next classes.

Chloé and Sabrina are at Chloé's locker. Chloé complains about the project and decides she isn't going to help. Sabrina readily agrees with Chloé, knowing that she and Marinette can finish the project together. Marinette, however, is concerned. Chloé tells her to mind her own business, but since Marinette and Chloé are part of the same group, it is her business. Sabrina explains that it's fine; they can do the research and the writing together while Chloé presents the project, meaning everyone gets a fair share. Marinette quickly points out that the way Chloé and Sabrina work together isn't fair. Apparently, Chloé and Sabrina have had Sabrina do all of their homework ever since Sabrina started doing Chloé's homework in grade school. Marinette lets Sabrina know that what she and Chloé have isn't friendship; Chloé is taking advantage of Sabrina and best friends don't take advantage of each other. Chloé argues that she is Sabrina's only friend, therefore, Sabrina has to listen to her or she'll be friendless. Marinette says she'd rather have no friends than be Chloé's friend. Chloé ends the argument and leaves, deciding she has better things to do, such as her hair.

Marinette leaves as well. Before she can go home Sabrina stops her and thanks her for standing up to Chloé. Marinette lets her know that it wasn't a big deal, but Sabrina takes it a bit too far and declares Marinette to be her new best friend. They go to the library to work on the project.

In the library, Chloé and Sabrina argue about Sabrina not doing Chloé's assignment. Chloé tries to bribe Sabrina back to her side with a Gabriel beret. Marinette doesn't believe what she's seeing; Sabrina is easily swayed by the beret. Before Sabrina can decide if she wants the beret and does Chloé's homework, several berets fall on Chloé's head. When they stop falling, a giant hairdryer appears and chases Chloé around the library. Adrien sees this and transforms into Cat Noir. Marinette runs, hides, and transforms into Ladybug.

Ladybug lassos the hairdryer and jumps on it, trying to control it while Cat Noir watches her and puns about the situation. When she manages to knock the hairdryer down, Cat Noir smashes it with his staff, destroying it. They notice the Evillustrator on the second level of the library and chase after him, but he draws a barrier and runs away from Ladybug and Cat Noir.

Ladybug and Cat Noir go to Chloé's room, trying to find out why the Evillustrator is targeting Chloé specifically. Chloé sits on one of her couches and defaces Nathaniel's drawing of himself and Marinette. Chloé denies doing anything wrong, stating, "Everyone adores me." Ladybug sarcastically calls her adorable, although Chloé doesn't hear the sarcasm and takes it as a compliment. She gets excited and proceeds to follow Ladybug around and take several pictures of the two of them. Cat Noir just watches. When Ladybug finds the defaced photograph, she leaves in a huff, telling Cat Noir to watch Chloé without her.

Back in her room, Ladybug detransforms into Marinette and throws her purse onto her chaise, accidentally throwing Tikki in the process. Marinette apologizes and rants to Tikki about how Chloé makes her so angry. Tikki tells her to calm down. This leads Marinette to remember her project with Sabrina. She checks her phone to find that all of the recent calls were from Sabrina. Before she can do anything about it, the Evillustrator erases one of the windows in Marinette's room and enters.

Much to Marinette's surprise, the Evillustrator isn't there to harm Marinette. Rather, he just wants to see her. He attacked Chloé because she is cruel and selfish. He isn't planning on hurting Marinette. Instead, he invites her to his birthday party on La Seine. Marinette tries turning him down, but when the Evillustrator gives Marinette an invitation and Marinette recognizes the exclamation mark on it as Nathaniel's signature watermark, she says yes. Elated, the Evillustrator leaves to prepare for the party.

Marinette transforms back into Ladybug and calls Cat Noir, stopping him from helping Chloé with her particle physics homework. Ladybug tells him that he no longer needs to protect Chloé; the Evillustrator is in love with Marinette and promised not to harm Chloé so long as Marinette goes to his birthday party. Ladybug tells Cat Noir to protect Marinette. Chloé walks outside while Cat Noir speaks to Ladybug, trying to get him back inside to complete her homework. Cat Noir turns her away and goes to Marinette's house.

When Marinette leaves her home, she is startled by Sabrina, who is standing on the door stoop. Sabrina completed Marinette's geography homework in a show of friendship. Marinette refuses it initially, telling Sabrina that she really didn't need to do it, but after seeing Sabrina's face fall, Marinette begrudgingly accepts the homework. Sabrina asks Marinette if she wants to work on the physics project immediately, but Marinette can't. Marinette tries explaining to Sabrina that she can't do the project tonight, telling her that she has something really important to do. Sabrina gets mad, comparing Marinette to Chloé because both of them make up vague excuses to get Sabrina to do their work. Sabrina takes away Marinette's geography homework and walks away, upset.

Cat Noir jumps down to Marinette's doorstep, introducing himself to Marinette. He flirts with her heavily, kissing her hand, flexing his muscles, and calling her, "Little Lady." Out of his sight, Marinette mimes Cat Noir talking. When he says that Marinette gets to be "[his] Ladybug," Marinette pretends to be flattered. Cat Noir tells Marinette to get the Evillustrator's stylus away from him and Cat Noir will do the rest. Cat Noir runs off, leaving Marinette giggling.

The Evillustrator kicks Cat Noir's staff, knocking the stylus out of Marinette's hands. He grabs the stylus and lands on the illuminated globe, hastily drawing a cube before Cat Noir can attack. The cube traps both Cat Noir and Marinette. The Evillustrator erases part of the boat, creating a hole and leaving them to sink while he goes after Chloé, his promise to Marinette broken. After watching Cat Noir struggle to free them, Marinette angles Cat Noir's baton, lifting the cube and escaping the boat onto the streets of Paris.

Cat Noir runs off, telling Marinette that she can thank him later. Marinette tells Tikki that he should be thanking her since she was the one who freed them. Marinette transforms into Ladybug and follows Cat Noir back to Le Grand Paris.

Cat Noir summons his Cataclysm, preparing to use it on the light switch in Chloé's room. He runs to the wall and destroys it, but the lights stay on; the Evillustrator sees through Cat Noir's plan and erases the switch before the wall is demolished. The Evillustrator attaches a ball and chain to Cat Noir's leg and erases the ground beneath him, causing Cat Noir to hang into the room beneath Chloé's.

Hawk Moth intervenes, demanding Cat Noir's Miraculous. Before the Evillustrator can take the Miraculous, Ladybug summons her Lucky Charm, receiving a small bouncy ball. Ladybug throws the ball, breaking all the lights in the room. The Evillustrator puts up his arm to protect his face from the ball, leaving himself open. Ladybug grabs him with her yo-yo, forcing him to drop his stylus. She catches it and breaks it just as Cat Noir's ring signals that he has one minute left. The ball and chain disappear, allowing Cat Noir to climb back into Chloé's room. Ladybug catches the akuma, purifies it, and returns Chloé's room (and her own) to normal.

The next day, Alya interviews Chloé about last night's akuma attack. Chloé complains about Ladybug's and Cat Noir's performances, saying they only made matters worse. Marinette overhears Chloé's complaints and laughs. Sabrina walks over, wearing the Gabriel beret. Marinette apologizes for not being able to work on the project yesterday, but says she can work on the project today. Sabrina brushes her off, saying she and Chloé--meaning just Sabrina--will work on the project. Turns out, Sabrina believes Chloé's lies about the akuma attack. She wanders off to tell Chloé her geography homework is ready.

Marinette closes her locker and screams when Adrien appears behind her. He asks her about Cat Noir, causing her to stutter and call Adrien dreamy and "the most awesome of awesome." Adrien takes Marinette's ramblings to mean that she is a fan of Cat Noir. He pats her shoulder and leaves for class, the school bell ringing. Marinette gazes after he lost in thought. Tikki tells her that she just called Adrien, "awesome," to his face, but Marinette ignores her. Tikki chastises her; Marinette needs better control over her emotions.

The episode ends with an image of Nathaniel's new comic about Ladybug.