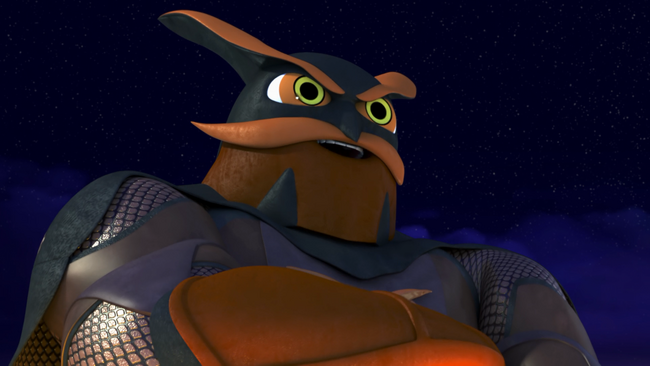 After school principal Damocles is akumatized into Dark Owl, he traps Ladybug and Cat Noir in a warehouse and tries to uncover their true identities.[7]

The school principal Mr. Damocles gets akumatized into Dark Owl. Armed with high-tech gadgets, he wants to get revenge on Ladybug and Cat Noir, who've humiliated him. To stop him, our heroes will have to ruffle his feathers![8]

At the end of the school day, Mr. Damocles hurriedly rushes Marinette, Alya, Nino, and Adrien out of the school before closing the doors behind them. Mr. Damocles then tip-toes into his office, making sure nobody is watching him, and boots up his computer program, Albert. He attempts to get Albert to open up the secret compartment behind his painting with a secret code; however, after several failed attempts, Damocles is forced to open it manually, revealing several framed Knightowl comics, a Knightowl figurine, a grappling hook, a boomerang and a custom-made Knightowl costume. Donning the (somewhat ill-fitting) suit, Mr. Damocles takes up the identity of The Owl and heads out to patrol Paris.

Outside, Mr. Damocles attempts to help a mother and son rescue their cat from a tree, although all his attempts to do so fail, until Cat Noir and Ladybug arrive to save him and the cat from falling. Ladybug and Cat Noir mention that this is the fifth time they've had to save Owl from himself and advise him to not attempt to be a superhero and endanger himself. TVi reporters arrive on the scene and Clara Contard interviews The Owl. The Owl claims that he will try to do better next time, being oblivious to Ladybug's and Cat Noir's real point, before running off, not realizing that the camera was following him the entire time, leaving Ladybug and Cat Noir to deal with the press. Both Ladybug and Cat Noir advise the children of Paris to not act like The Owl and try to be superheroes like him, as it is dangerous. At the end of her broadcast, Nadja Chamack asks the question of who The Owl's real identity is.

That evening, Ladybug and Cat Noir discuss Mr. Damocles's superhero antics on a rooftop and decide to create a plan to make him feel like a real hero for at least one day so that his dream will be fulfilled and he'll stop acting like a superhero. Through the night, Marinette creates fake copies of her earrings, Cat Noir's ring, and a fake supervillain costume made out of cardboard.

Back in his office, Mr. Damocles is on the internet, where the news has revealed his identity to Paris and Alec Cataldi is mocking him. Meanwhile, Hawk Moth senses Mr. Damocles's sadness and sends an akuma after him. The akuma enters Damocles's computer, and Hawk Moth offers Mr. Damocles real powers and weapons in exchange for Ladybug's and Cat Noir's Miraculouses. Mr. Damocles accepts Hawk Moth's offer and is transformed into The Dark Owl.

Later that evening, Marinette is sewing in her room while Tikki watches Clara Nightingale's music video on her computer. Dark Owl then hijacks the television broadcasts throughout Paris, to the disbelief and horror of Marinette and Tikki, as well as Adrien and Plagg. Dark Owl announces that he has kidnapped a multitude of zoo animals, locked them in a bus dangling off the Eiffel Tower, and, with the press of a button, can drop them all on a helpless kitten; and if anyone tries to save them, liquid nitrogen bombs will freeze and shatter the tower's structure, destroying them anyway. Dark Owl then demands that Ladybug and Cat Noir hand over their Miraculouses to him, also telling them to follow his Owl-Signal to find him before ending the transmission. Marinette and Adrien then immediately transform into their respective superhero identities. At the same time, Dark Owl gets Albert to activate the Owl-Signal.

Ladybug and Cat Noir meet on a rooftop, coming up with a plan of letting Cat Noir distract Dark Owl while Ladybug sneaks up on him from behind. At the Parc des Princes, Cat Noir, as per the plan, distracts Dark Owl by talking while Ladybug scouts the villain from the back, guessing that the akuma must be in one of his weapons on his belt. Ladybug attacks Dark Owl and manages to knock his detonator to Cat Noir, only to be flung away onto her partner by Dark Owl's hook line. Dark Owl tells the heroes that they have one last chance to surrender their Miraculouses, but they still refuse. Dark Owl ensnares the two using his grappling hook, and they are forced to roll away as Dark Owl attempts to pounce on them. Cat Noir uses his Cataclysm on the ropes to escape, and Ladybug uses her Lucky Charm soon afterward, receiving a fountain pen. Ladybug and Cat Noir incapacitate Dark Owl long enough for them to get a hold of the detonator on top of a shipping crate, only to find that the countdown will not stop. Dark Owl then has Albert open a trapdoor on the crate, dropping the two inside the crate and trapping them there; he reveals that the animals, bus and bombs were nothing but holograms.

At that moment, the crate begins to fill up with whipped cream, which Dark Owl claims will drown the two heroes if they refuse to give up their Miraculouses. Ladybug spots the camera lens at the top of the crate, Cat Noir's ring, and the pen. She then squirts the pen ink over the lens so that Dark Owl can't watch them, although the latter is unfazed by this. Cat Noir is unable to break down the crate's walls, and deems their situation hopeless; however, Ladybug instead decides to give up and hand over their Miraculouses, telling Cat Noir that they must close their eyes when they detransform.

Both Tikki and Plagg see each others' Miraculous wielders, which shocks Plagg, but they don't say anything. Marinette is about to take Adrien's ring but, remembering she still has the fake Miraculous she had made, gives those to Dark Owl, who in turn sends them to Hawk Moth. Feeling triumphant for a moment, Hawk Moth discovers the Miraculouses are fake, but by then, both kwamis have been able to recharge. The two heroes once again transform, and Cat Noir destroys the crate. Dark Owl wonders how they did it, but Ladybug merely tells him that they would never give him their Miraculouses and claims to have had a Plan A, B, C, and all the alphabet to Z.

Dark Owl fires his boomerangs at them while the heroes are still trying to figure out where the akuma is. Telling Cat Noir to cover her, Ladybug uses her Lucky Charm and receives a Knightowl comic book. Upon reading it, she figures out that since the "real" Knightowl has a partner, so must Dark Owl. Just as Cat Noir manages to restrain him, she realizes the akuma is back at the school and goes to Principal Damocles's office to try to destroy the akumatized computer, but Dark Owl gets there, too. She kicks the rolled-up comic book to the Knightowl figurine that's on the secret compartment, but the villain is able to remove one of her earrings, almost detransforming Ladybug. Then the falling figurine triggers a chain reaction that knocks over the monitor, releasing the akuma, and Ladybug retrieves her earring and purifies the akuma. Hawk Moth is once again defeated but vows to get revenge. Afterward, Ladybug and Cat Noir see that Mr. Damocles has become a superhero on a smaller scale by doing good deeds and has genuinely earned people's admiration.

Now that Cat Noir and Ladybug have more free time, Cat Noir asks her if she'll go to the movies with him. She politely turns down his offer, saying that she made a promise to hang out with someone else and that he'll see her soon, as she swings away, leaving Cat Noir smiling wistfully. At Alya's house, Marinette is playing a video game with Alya. As Alya explains her latest adventure with Ladybug and Cat Noir, Marinette wins the game. Startled, Alya says it was unfair because she wasn't looking and tickles Marinette, leaving the two of them laughing. Tikki quietly laughs before the end card appears.