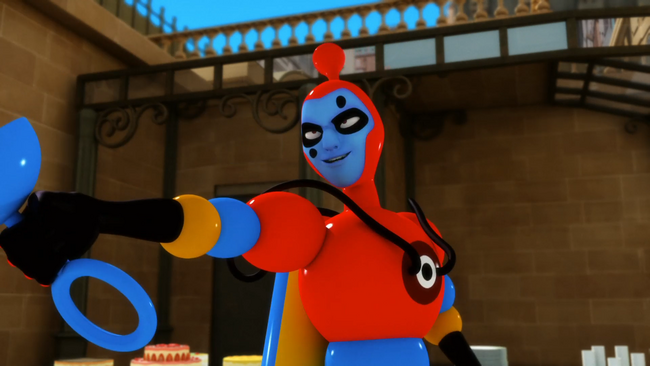 Adrien's best friend, Nino, is akumatized into the Bubbler, a villain who traps adults in bubbles and sends them floating away into the atmosphere.[8]

At the Agreste mansion, Plagg gives Adrien a piece of cheese as a birthday present, but since it stinks and is a "filthy piece of Camembert," Adrien dislikes it. Happily, Plagg eats it instead. While he eats breakfast, Nathalie Sancoeur gives Adrien his schedule for the day. When Adrien asks if his father, Gabriel Agreste, agreed to let him have a birthday party, Nathalie responds that Adrien's father decided against it and wishes a saddened Adrien a happy birthday before leaving.

At the beginning of lunch break at school, Nino Lahiffe and Adrien are chatting on the front steps. Nino is blowing bubbles while talking to Adrien. Nino is surprised that Mr. Agreste won't throw Adrien a birthday party and decides to speak to Mr. Agreste during the lunch break. Meanwhile, Marinette and Alya Césaire hide behind a banister. Alya is encouraging Marinette to give Adrien the gift that Marinette made, and Marinette is trying to build up courage for the task. Marinette stands up, looks at Adrien, and immediately returns to hiding, her emotions overwhelming her. Alya pushes Marinette out from behind the banister, and she stumbles in front of the boys. The boys immediately cease speaking, staring at her.

Chloé Bourgeois, while speaking to Sabrina Raincomprix, realizes that she forgot to get Adrien a birthday present. Extremely nervous, Marinette stutters and babbles, trying to say that she has a gift for Adrien, but before she can spit it out, Chloé shoves her aside. Chloé walks up to Adrien, lies about getting him a present that failed to be there on time by blaming it on the delivery company, and leaves, telling Sabrina to find him a present right away. Adrien leaves soon after that for a photo shoot, much to Marinette's and Alya's disappointment. Then, Nino walks away to the Agreste mansion to talk to Mr. Agreste.

Alya and Marinette stand in front of the gates of the Agreste mansion. Marinette tries to pry open the mailbox but can't. Alya suggests ringing the doorbell, and while Marinette is protesting, a camera immediately pops out of the wall focusing on Marinette. Stuttering, Marinette explains that she has a gift for Adrien. The mailbox opens and swiftly closes after the present is placed inside, dismissing Marinette. Marinette does a little dance, hoping Adrien enjoys the gift. Alya then asks if Marinette signed it, and Marinette freezes, realizing that she forgot to.

Nathalie, who is sitting at her desk in Gabriel's atelier, sighs, putting the present on the corner of her desk. When Gabriel calls her to ask who was at the gate, Nathalie explains it was one of Adrien's friends who came with a gift. This answer leads to Gabriel questioning why Nathalie has not yet given Adrien a gift from him. After Gabriel hangs up, Nathalie frets over not getting Adrien a gift before spotting Marinette's gift. She sees it and is relieved, deciding to claim it as a gift from Gabriel. Nino then rings the doorbell.

Nino and Nathalie wait inside the Agreste mansion's foyer. Gabriel stands at the top of one set of stairs, assuming that Nino is there for Adrien. Nino says otherwise, stating that he is there to speak with Mr. Agreste. He attempts to persuade Gabriel into giving Adrien a birthday party, but his speech is littered with colloquialisms such as "dude," giving Gabriel a poor impression of him. Gabriel tells Nino to drop the subject, but Nino does not. Adrien walks in, hearing the tail end of Nino's speech. Gabriel declares that a birthday party will not be happening and banishes Nino from the residence, telling Nino that he is a bad influence on Adrien. Nino leaves angrily, and Adrien tries to apologize for his father's strictness. Nino doesn't believe it to be fair and says that Adrien's father is harsh and uncool.

Nino sits on a bench at the Place des Vosges next to Marinette's house, blowing bubbles to calm down after how he has been treated. He spots a boy crying and being dragged away from the park by his father because the boy still has chores to do and can no longer play. Nino grumbles over it, frustrated with parents and says that, "parents ruin all the fun." Hawk Moth, in his lair, senses Nino's frustration and sends an akuma to him. The akuma lands on Nino's bubble wand. Nino agrees to take powers to get revenge on the adults and in turn take Ladybug's and Cat Noir's Miraculouses for Hawk Moth. He then turns into the supervillain, Bubbler.

Bubbler flies across Paris, with a trail of purple bubbles flying from his bubble wand. These bubbles catch the adults, turning green when they have captured someone. They then rise in the air, going off into space.

Meanwhile, Marinette is eating lunch with her mother. She daydreams about Adrien's reaction to her present while her mother opens a window. Right before Marinette's eyes, a bubble scoops up her mother. Marinette spots her father, Tom Dupain, in the sky next to her mom, too far for her to reach, among many other adults trapped in bubbles. Tikki pops up next to her, and both of them agree that they need to fix this immediately. Marinette then transforms into Ladybug.

Ladybug runs outside the bakery to find two children crying next to an older boy watching the adults in the sky. The bubbles act as projection screens, displaying Bubbler's face as he conveys his message about parents keeping their kids from having fun and how they can have fun now. Ladybug consoles the children, promising to bring back their parents, and swings away to the rooftops with her yo-yo.

Adrien, eating alone, leaves the dining hall of the Agreste Mansion, intending to go back to school. As he leaves, he finds a surprise in the courtyard: all of his classmates from school have set up a surprise birthday party for him. Adrien immediately realizes that Nino was akumatized and runs back inside, trying to figure out what to do. Plagg wrongfully convinces Adrien that he should party first--it's not like he'll get another chance to do so.

Ladybug, on the other hand, spots fireworks bursting over the Agreste mansion. Both Adrien and Ladybug realize that the kids at the party are not dancing for fun; they're dancing to keep from being sent into the sky. Chloé asks Bubbler--who is currently acting as the party's DJ--to switch the music over to a slow song since it would be Adrien's first slow dance. The Bubbler first disagrees, but when Chloè pleads, he agrees, as he wants Adrien to enjoy himself. The other children begrudgingly partner up, and Chloé takes Adrien for herself.

Adrien doesn't want to dance with Chloé. He leans away from her, especially when she tries to kiss him. Ladybug, jealous and angry, calls out "Lucky Charm!" and a vinyl record appears. Ladybug looks around and figures out that she has to throw it to the side of the building. Ladybug bounces the record against the side of a building, and the record ricochets to the DJ booth, changing the song. Ladybug's earrings beep, so Ladybug then jumps over the side of the building, transforming back into Marinette.

Tikki scolds Marinette for wasting power out of jealousy. Marinette apologizes before hiding Tikki in her purse and entering the courtyard. She takes three cookies, giving them to Tikki to recharge her energy. Before she can change back into Ladybug, Alya arrives. She leads Marinette through the Agreste mansion to Nathalie's office. The present from earlier is there, and Marinette takes the time to sign it. Tikki worries about the time Marinette's taking and for good reason; Bubbler spots Ivan Bruel not dancing and decides to place him in a bubble for not complying.

Marinette transforms back into Ladybug and stands on the wall of the Agreste mansion's gate. Ladybug interrupts the party by throwing her yo-yo at the power cord for the speakers and DJ booth. Ladybug and Bubbler begin to fight, causing the children to hide behind the banisters in front of the Agreste mansion. Adrien runs inside, scolding himself for not taking out Bubbler. Plagg ignores him, dancing. Adrien transforms into Cat Noir.

Ladybug continues with her attack while Cat Noir joins in, the two deflecting bubbles left and right while the children watch in awe. Then Bubbler snaps his fingers, and the bubbles swirl around Ladybug and Cat Noir, trapping them in one massive bubble. The only way they can escape is by giving up their Miraculouses, something that neither one of them will do. Ladybug tries to convince Bubbler that children need their parents, and Cat Noir agrees, although he is slightly hesitant.

Enraged, Bubbler tosses the heroes into the air, angering Hawk Moth because he wanted the Bubbler to take the Miraculouses. Above the Eiffel Tower, Ladybug suggests that Cat Noir uses his Cataclysm. Cat Noir complains that she should have said that earlier, before they were in the sky. He summons it and breaks the bubble. Ladybug grabs his arm as he throws his staff into the Eiffel Tower. Ladybug hooks her yo-yo around it, the two swinging to the ground safely. Ladybug tosses Cat Noir's staff to him, and they race back to the Agreste mansion.

Ladybug and Cat Noir return posthaste, the children cheering for Ladybug. Ladybug remarks that the kids don't like the Bubbler's party. Before anything can be done, Bubbler captures all of the children, sending them off to their parents. He then flies off, the battle going to the Eiffel Tower. With only one pad left, Cat Noir reminds Ladybug to hurry, and she summons her second Lucky Charm. She receives a large wrench. Bubbler hurls bubbles at Cat Noir, exploding upon impact with the Tower.

Examining the area around her, Ladybug spots an HVAC and takes it apart. She sends a pipe with air spewing out of it to Cat Noir, who uses it to deflect the bubbles. Bubbler raises his bubble wand, about to take another swing, when Ladybug catches it with her yo-yo and wrenches it out of his grasp. Breaking it in two, she captures the akuma and cleanses the city, bringing back the parents and children from the bubbles and returning Nino back to normal.

Defeated, Hawk Moth vows to capture and crush Ladybug as his window closes.

Afterward at the Agreste mansion, Nathalie is typing on her computer when Gabriel calls and asks if Adrien liked his gift. Nathalie says that she will check. Hanging up, Nathalie takes the present, removes the note Marinette signed, and hands the gift to Adrien, who is eating dinner, saying that his father gave him the gift. Adrien is extremely surprised by the gift and asks Nathalie to thank his father before he even opens it. Nathalie agrees, walking away.

The next day at school, Chloé is yelling at Sabrina over the tardiness of Adrien's gift (it hasn't been delivered yet and won't be for another week due to all the adults being bubbled the day before). Adrien steps out of a limousine, a new blue scarf around his neck. Marinette is silent, exuberant that Adrien is wearing her gift. Alya mentions the scarf, and Adrien explains it is a gift from his father. He then explains that though his father banished Nino from the house, he will not stop hanging out with him. When Alya asks Marinette why she didn't tell him that she was the one that gave him the scarf, she says that she'd rather ensure Adrien's happiness over hers, not spoiling the moment. Alya then hugs Marinette, and they all enter the school, ending the episode.