Guardian of the Miraculouses

Unknown member(s) of the Order of the Guardians

Monk
Guardian of the Miraculous

Order of the Guardians

Neutral
Su-Han[1] is a celestial guardian of the Miraculous.

Su-Han is stoutly built man with white skin, thin brown eyes and thick gray eyebrows. He is bald and has a strong jaw.

He wears a red and brown guardian monk suit while carrying a staff. He also wears old and torn shoes.

Su-Han takes his job very seriously, strictly following the rules. He was also strict towards Marinette when she violated the rules (albeit she didn't know of the other rules until he told her). He shows disrespect towards those who can’t properly take care of the Miracle Box, as shown with how he disregards Master Fu for destroying the temple and losing the Butterfly and Peacock Miraculouses. However, despite him trying to get the Miraculouses back let alone attempting to pick new knew candidates, he was unaware of the consequences he could have caused. Su-Han is also unaware of technological advancement, believing that a movie character is trapped in Marinette’s computer. Knowing that times have changed, he was also open to learning more about the new world.

Su-Han is fiercely skilled in hand-to-hand combat, easily overpowering and defeating Ladybug and Cat Noir. He can use a special technique that can repel akumas by calling upon a "swirl of wisdom" by saying "the virtuous wind resists temptation" and repeating "My anger is mine, but I am not my anger".

Because he is a guardian, he can decipher some of the code in the Miraculous spellbook. He is also likely able to improve the health and read the energies of kwamis.

Su-Han and Fu initially had a teacher-student relationship. The former admitted that he saw the potential in the latter, but Su-Han's opinion of Fu went soured when Fu was not able to complete the tasks the Order set for him. He eventually patched things up with his former student and let the former guardian live his life in peace.

Su-Han was initially extremely disdainful of Marinette, seeing her as a child unfit to be Guardian of the Miracle Box as well as her ignorance and later disregard for the rules the Guardians must follow (albeit she didn't know of the other rules until he told her, Master Fu didn't tell her them or she didn't ask). Eventually, through her actions, Su-Han admits that not only she is a capable Miraculous holder, but also a suitable Guardian. However, he also said he would keep an eye on her from afar and states he shall take the Chinese Miracle Box back if she fails.

Originally, Su-Han didn't like Cat Noir due to him being a child, and when Cat Noir refuses to hand over his Miraculous, they engage in combat. However, after Cat Noir and Ladybug defeat Furious Fu, he warms up to him.

In stark contrast to Fu or Marinette who treat the kwamis as companions and allies, Su-Han views them as cosmic beings of incredible power who must be controlled, especially Plagg who should not roam freely without supervision. 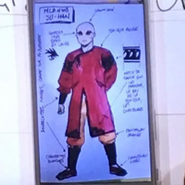 Retrieved from "https://miraculousladybug.fandom.com/wiki/Su-Han?oldid=746121"
Community content is available under CC-BY-SA unless otherwise noted.