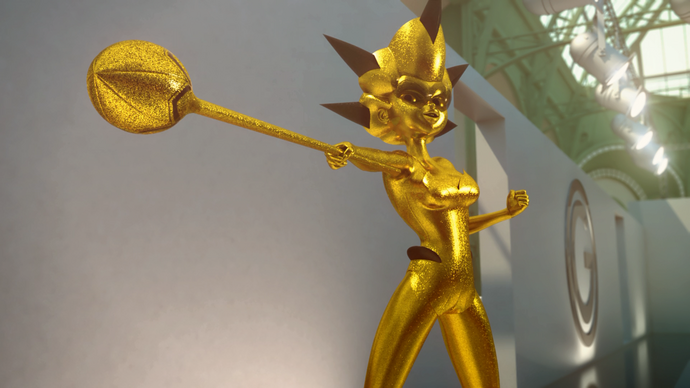 This episode is also the 1st part of the 2 parter, "The Queen's Battle."

When she is humiliated by Gabriel, Chloe's mother becomes Style Queen, who possesses a magical scepter and aims to exact her revenge on Adrien.[5]

It's Fashion Week in Paris and Adrien is going to be modeling the derby hat Marinette submitted to Gabriel Agreste's fashion design contest. Marinette fears that no one will like her hat since there's a synthetic pigeon feather and not a real one, but Tikki reassures her that it's fine and reminds Marinette of Adrien's allergy.

The two then head to the fashion show, but once they arrive, Marinette discovers that Audrey Bourgeois, the harshest fashion critic in the world, is in town for the event. Following her appearance, Marinette is unsure about presenting the hat, especially when she overhears the fashion critic tell Nadja Chamack that glitter is what's in style since there is no glitter on her hat. Marinette attempts to sneak away, but Nathalie catches her and takes her to Adrien. On the way, she accidentally bumps into Chloé and Audrey, dropping her hat in the process. Chloé shows Audrey the hat and makes fun of it, but Marinette denies to Audrey that the hat is hers before taking off with Nathalie.

In his trailer, Adrien feels a little odd about the suit he has to wear for the fashion show and is teased by Plagg for it. Marinette and Nathalie then arrive. Marinette walks over to Adrien but trips over the trailer stairs and drops her hat, causing the side feather to fall off. Together, Adrien and Marinette go to pick it up. Adrien realizes that the feather has fallen and expresses worry that Marinette's work is ruined. Marinette says it doesn't matter since she assumes Audrey Bourgeois didn't like it, but Adrien reassures her that the hat is fine and puts it on, practicing his catwalk with it. After Marinette compliments him, she and Nathalie leave.

Back at the fashion show, Tom and Sabine wonder if Marinette is nervous. Alya tells them that she probably is since it's her first fashion show. Audrey and Chloé then show up with Audrey sitting beside them. However, Alya tells her that the seat is reserved for Marinette. Marinette and Nathalie arrive as Chloé boasts about her mother being the best fashion critic in the world. Nathalie tells Audrey that Gabriel reserved a seat for her, which pleases her until Nathalie says that it's in the second row. Audrey refuses to sit anywhere but the first row, but all Nathalie says in reply is that she'll reserve her seat for someone else if she doesn't want it. Audrey attempts to fire Nathalie, but she reminds her that she works for Gabriel, not her. Enraged, Audrey calls Gabriel, but he ignores her call and turns to speak to his wife Emilie, who is inside a coffin in Gabriel's secret basement. He apologizes to her about taking so long but promises that his newest prey has more malice than anyone who's ever been akumatized before, calling her his masterpiece.

Audrey is further angered when Gabriel doesn't pick up her call. Claiming that she will not watch a fashion show from the second row, Audrey turns to leave with Chloé and André following behind her. Hawk Moth picks up on Audrey's anger and sends an akuma after her, which infects the gold rose on top of her hat. Hawk Moth offers her the power to show everyone that she is the queen of style in exchange for Ladybug and Cat Noir's Miraculouses. Audrey accepts the deal and is transformed into Style Queen, a villain who can turn others into gold glitter statues.

The fashion show starts and Adrien walks down the catwalk when suddenly, Style Queen appears and demands that Gabriel Agreste kneel before her. Adrien tells her that his father is not present, so Style Queen decides to settle for Adrien instead, turning him into a glitter statue, much to the crowd's horror. Plagg, who was watching everything from above a rail, realizes that Adrien being turned into a statue presents a problem and takes off. Hawk Moth is equally horrified at what's happened to Adrien, but decides that he has no choice and tells Style Queen to capture Ladybug and Cat Noir's Miraculouses as soon as possible. Meanwhile, Marinette hides and transforms into Ladybug.

Arriving at the Agreste mansion, Style Queen searches everywhere but Gabriel is nowhere to be found. She turns to Chloé and asks her where he is. Chloé says that Gabriel usually never leaves his house. Hawk Moth then makes contact and tells Style Queen that Ladybug and Cat Noir are protecting Gabriel and that in order to get to him, she must first capture Ladybug and Cat Noir's Miraculouses. Style Queen agrees and takes off to the Eiffel Tower with Chloé and Adrien.

At the tower, Style Queen puts Adrien on a gold table, puts her akumatized object in his mouth, and makes a barrier over the two. She then orders Chloé to find Ladybug and Cat Noir and call her if she does. Once Style Queen leaves, Chloé desperately tries to free Adrien but with no luck. She then notices Ladybug, who'd arrived at the tower and left a voicemail to Cat Noir to hurry up. Chloé ushers Ladybug to hurry since Adrien was starting to vanish and tells her where Style Queen's akuma is. Style Queen catches Chloé helping Ladybug and turns her into a glitter statue. Ladybug and Style Queen face off once again, but Ladybug has trouble holding her ground against Style Queen. Calling upon her Lucky Charm, Ladybug receives a mallet and soon realizes that it's telling her to go to Master Fu. As she leaves, Style Queen prepares to go after her but is stopped by Hawk Moth, who tells her that Ladybug will soon come back with Cat Noir.

Marinette arrives at Master Fu's and explains the situation to him. Master Fu assures Marinette that Cat Noir is fine and reveals Cat Noir's kwami, Plagg, to be with him. Plagg tells Marinette that Cat Noir lost his Miraculous, much to her shock, so he'll have to help her instead. Master Fu, however, refuses to allow this since Plagg is too dangerous without an owner, reminding the kwami of past disastrous events caused by him. Instead, Master Fu takes out the Miracle Box and allows Marinette to choose a trusted ally to help her fight Style Queen on the condition that she return the Miraculous once the job is completed. Marinette chooses the Bee Miraculous and claims to know just the right person.

Back at the Eiffel Tower, Alya climbs up to get more footage for her Ladyblog. Ladybug appears before her and begins to offer her the Bee Miraculous, but before she can, Style Queen appears and attacks the two. Alya pushes Ladybug out of the way, turning into a glitter statue, and in the fall, Ladybug drops the Bee Miraculous. Without another option, Ladybug calls on her Lucky Charm again, this time receiving a tube of glue. Ladybug puts the glue on a French flag nearby and uses it to attack Style Queen. As her body is made from glitter, parts of it fall onto the flag, leaving her without a midsection. Even so, Style Queen manages to attack Ladybug and make her drop the flag.

Before she can turn Ladybug into a glitter statue, Plagg appears and protects Ladybug from Style Queen. He calls upon Cataclysm, destroying half of the Eiffel Tower, a nearby bridge, and the Tour Montparnasse. It gives Ladybug enough time to break the barrier surrounding Adrien, take the akumatized object, break it, and purify the akuma. Then using her Miraculous Ladybug power, Ladybug returns everything back to normal. Ladybug and Plagg then pound it, with the latter promising to keep an eye on Cat Noir.

Hawk Moth is both shocked and saddened that Style Queen, his greatest masterpiece, failed, unsure what else he can do. Gabriel enters his atelier and is contacted by Nathalie, who comments on the big risk he took involving Adrien. Gabriel tells her that he wishes that he could tell Adrien why he's doing what he's doing, turning to face the portrait of his wife.

Back at the Eiffel Tower, Chloé and Audrey walk down the tower's stairs, with the latter complaining about the elevators. Chloé then stumbles across the Miraculous box and later in her room opens it up, finding the Bee Miraculous and the kwami Pollen, who happily greets her.