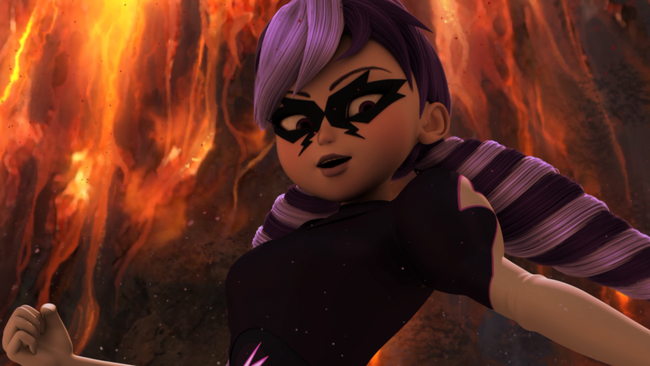 Ladybug and Cat Noir must fight Aurore Boreale when she is akumatized again into Stormy Weather 2, who wants to plunge the world into endless winter.[8]

At the end of the school day, Alya asks Nino to come over to her place to do homework together, but Nino says he can't because he promised to deliver the homework Adrien missed due to his photoshoot, much to Alya's annoyance. However, Marinette offers to deliver the homework instead and let Nino go with Alya. Then the three overhear Sabrina tell Chloé that Aurore's GPA dropped a whole point on her last report card. Chloé makes fun of Aurore for this, telling her that she can't expect to be a weather girl and have good grades at the same time. Chloé then tells Sabrina not to make Aurore cry, mockingly pointing out that she may turn into Stormy Weather again and even makes fun of her akumatized powers. Marinette steps in and tells Chloé that Aurore will do better next term and also advises Aurore to ask for help if she needs it. However, Chloé states her belief that "once a villain, always a villain", though Marinette tells her that people change. Chloé believes that Marinette will never change, pointing out how she always stutters whenever she's near Adrien. She also makes fun of Alya for her inability to find out who Ladybug really is. She then turns to continue to make fun of Aurore only to find that she's gone. Chloé walks off with Sabrina following behind her. Alya and Nino laugh this off while Marinette glares at Chloé.

After she finishes writing down the lessons for Adrien, Marinette tells Tikki that Chloé wasn't completely wrong about her not changing, as she does always stutter when she's around Adrien. She then takes note of the love letter Adrien wrote on Valentine's Day, wondering what he thinks of her and who the letter was meant for. Marinette calls herself lame, but Tikki believes that Marinette isn't lame and has changed since she first met Adrien. Marinette believes that she got more clumsy, but Tikki says that she's talking about all the things she's done with him such as going to the movies with him. However, Marinette points out that she was wearings her pajamas and a towel, and Tikki admits that wasn't the best example. She mentions the time they practiced for the school video game competition together, fenced with one another, and the gift Adrien gave her for her birthday. Marinette says that Adrien has become a friend she can talk to about anything except her feelings. She also wonders if she can be in love with someone despite being their friend.

At the Agreste mansion, Gabriel has Nathalie write a letter to Mrs. Tsurugi that states even though things aren't going as planned, change is a good thing and their agreement will be strengthened in the end. Nathalie thinks to herself that things really aren't going as planned, not even for her. She admits to regretting taking her job as it has become too much. She also states that her affection for Adrien, sadness for Emilie, and admiration for Gabriel has grown, even stating that she would do anything for the latter no matter the cost. She then begins violently coughing and falls to the floor. Gabriel asks her if she's alright, and Nathalie gets back up and says she is. Gabriel then feels a strong negative emotion, so he tells Nathalie that they'll continue with the letter later and prepares to enter his lair. However, Adrien bursts into the atelier and tells his father that he enjoyed the photoshoot. When he notices Gabriel glaring at him, he apologizes and says that he only wanted him to know that it was interesting. Gabriel tells Adrien that he can tell him all about it later as he is busy at the moment. Adrien asks to go out and meet his friends, but Gabriel merely tells him that he'll see them at school tomorrow and has Nathalie escort him out. Once they're gone, Gabriel tells Nooroo that the negative emotion he senses is familiar. Nooroo believes that it might be Adrien's and advises Gabriel to spend more time with his son. Gabriel says that everything he is doing is to make Adrien happy again, though Nooroo expresses his belief that Gabriel may lose him if he continues his evil path. However, Gabriel refuses to listen and seals Nooroo's mouth shut before entering his lair and transforming into Hawk Moth.

For a brief moment, Hawk Moth considers the possibility of Nooroo being right about him taking too many risks, even remembering the time Adrien jumped off of a building, but then decides that he must succeed no matter the price and sends an akuma after Aurore, which infects her parasol just as she enters the elevator of the TVi studio. Hawk Moth tells her that people don't change; they grow. He offers her the power to control all the forces of nature. Aurore agrees and is transformed into Stormy Weather.

In his room, Adrien expresses his belief that his father will never change. Plagg says he likes people who never change because that way, you always know what to expect. He even points out how much he loves cheese and would never change that. Adrien wonders if this means that his life will never change, but Plagg assures him that's not the case, pointing out the changes in his life such as being able to go to school, though admitting he finds it strange that Adrien loves going to school so much. Adrien says that it's because he was tired of being cooped up at home all the time because of his father and has since then made a lot of friends. Plagg affirms that this is proof that Adrien's life has changed, though Adrien believes that his father hasn't. Plagg is not so sure, reminding Adrien that his father didn't punish him when he sneaked out to go to the movies with Marinette. Adrien admits this to be true and even remembers them watching his mother's movie with his father instead. Plagg also reminds Adrien of the time he and his father played a duet on the piano together. This prompts Adrien to also recall that his father let him go to his friends' concert after that and gave him an amazing present on his birthday. Plagg compares Adrien's father to cheese with a thick rind, stating that it has a hard surface but once you bite into it, it's either really soft inside or slightly rotten. The two then hear a loud shake. Plagg insists that he didn't use his Cataclysm, and the two look outside and spot a giant volcano. With that, Adrien transforms into Cat Noir.

Cat Noir joins Ladybug, who is watching Stormy Weather as she declares that she will use her giant volcano to move the Earth away from the sun, therefore trapping everyone in an eternal winter and proving just how powerful she can be. Cat Noir asks Ladybug if Stormy Weather can really do that. Ladybug says probably, but it doesn't matter because they'll stop her. The duo then head towards Stormy Weather.

Alya and Nino watch a news broadcast about Stormy Weather in Alya's room. Nino notes how Stormy Weather is much stronger than last time, which Alya blames Chloé for. Nino expresses his wish that things could go back to the way they were before Hawk Moth. However, Alya points out that if it weren't for Hawk Moth, the two of them probably wouldn't be together. This prompts Nino to recall the time Ladybug threw him and Alya in a zoo cage. Alya also recalls how it is thanks to Ladybug that they are superheroes. Suddenly, Alya's little sisters burst in, scared of Stormy Weather, though Nora also comes in and assures them that she'll protect them. She tightly squeezes the four in her arms.

On the rooftop of Le Grand Paris, Chloé has set up her Bee Signal and impatiently waits with Sabrina for Ladybug to give her her Miraculous, calling herself the best superhero of them all and the nicest person. Though Sabrina agrees, flashbacks of Chloé include the time she called the fire department during Tom's baking lesson and when she pretended that Sabrina was invisible. Chloé doesn't understand why Ladybug isn't coming, prompting Sabrina to recall the time Chloé helped Ladybug defeat Despair Bear and all the times she was Queen Bee. Sabrina calls Chloé the best and calls Ladybug lame for not showing up, though Chloé tells Sabrina not to call Ladybug that. Suddenly, the two spot someone. At first, Chloé believes that it's Ladybug but is surprised when she sees Stormy Weather instead. Stormy Weather asks her if she still finds her powers ridiculous. Chloé merely states that she was right about "once a villain, always a villain", provoking Stormy Weather to trap her and Sabrina in a block of ice.

Ladybug and Cat Noir show up and battle Stormy Weather. In the middle of it all, Ladybug takes note of how much stronger Stormy Weather has gotten but also believes that she and Cat Noir are stronger, too. Meanwhile, Nadja Chamack continues to report the battle between Ladybug, Cat Noir, and Stormy Weather with Clara. Though the screen freezes and stops working, Clara continues to report that Ladybug has called on her Lucky Charm and received a pencil while Cat Noir has grabbed a photocopier. Ladybug makes a photocopy, and eventually, Stormy Weather is defeated and everything is returned to normal. The citizens of Paris cheer, Alya's little sisters do a dance to celebrate, Chloé says that Queen Bee would've done better, and Hawk Moth vows to one day send both Ladybug and Cat Noir into oblivion.

Once Marinette arrives at the Agreste mansion, she rings the doorbell, and Nathalie answers it through the camera. Marinette says that she is in Adrien's class and is delivering his homework for him. The mailbox opens up, and Marinette asks Nathalie to tell Adrien that it was she who delivered his homework and that she did it as a friend, to which Nathalie agrees. Before putting it in the mailbox, Marinette writes a little note on the assignments. Once Nathalie is gone, Tikki praises Marinette and calls her new and improved.

In his room, Adrien talks about how amazing and classy Ladybug is. However, Plagg reminds Adrien of the time Ladybug stood him up for his rooftop date and later told him that she loved someone else. He advises him to find another girl to love and brings him all the cards he got on Valentine's Day. But Adrien says that he can't simply change his feelings. Just then, Nathalie comes into his room and delivers his homework, telling him that it was Marinette who brought it for him and that she did it as a friend. Adrien thanks Nathalie, and she leaves. Adrien reads the note Marinette left for him and notices that the handwriting is similar to the love letter he got on Valentine's Day. He briefly considers the possibility of the love letter being from Marinette but then remembers the time that she told him that she didn't like him like that and was just a fan who loves fashion. He also remembers Luka and concludes that it's just someone with similar handwriting before the end card appears.