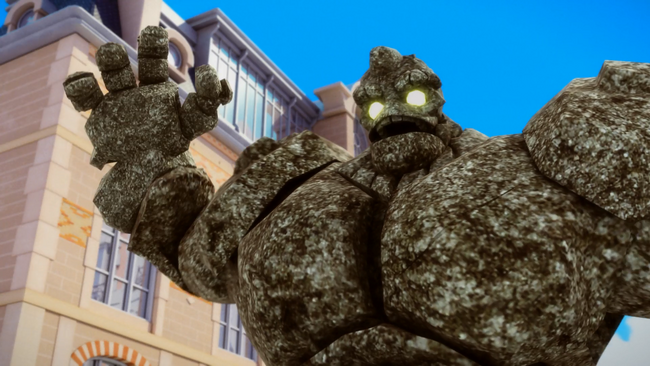 This episode is also the 2nd and final part of the Season 1-based 2-parter, "The Origins Story."

Marinette lacks self-confidence and she doesn't want to be Ladybug. But Paris, Cat Noir and her best friend Alya are in danger, and Ladybug is the only one who can save them.

In a continuing flashback to Ladybug and Cat Noir's origins, Marinette mistakes Adrien for a bully and hesitates to embrace her Ladybug persona.[11]

Marinette no longer wants to be Ladybug. But Paris, Cat Noir and her best friend Alya are in danger: Ladybug is the only one who can save them.[12]

Continuing from the previous episode with innocent victims turning into immobile Stonehearts all over Paris, Marinette discreetly asks her father for advice on the situation, and they reply that Ladybug will return and save the city. When Marinette expresses her doubt, Tom only reassures her. She runs up to her room, and after a brief pause on her way, takes out her earrings.

At the Agreste mansion, Nathalie discovers that Adrien has left, much to the anger of his father. Adrien is then seen running as fast as he can trying to reach the school before Nathalie and the Gorilla catch up with him.

Marinette, meanwhile, arrives at school. Alya informs her of the new website she created called the Ladyblog and reassures Marinette that Ladybug will save the city once more.

Marinette encounters Chloé mocking Ivan, saying he is a monster and making fun of his crush on Mylène. In his lair, Hawk Moth identifies Ivan's anger and prepares to release another akuma. Adrien reaches the school, just as Nathalie exits the car and tells him not to go through with it, but Adrien ignores her and goes in any way.

Alya confronts Chloé for her attitude towards Ivan, but Chloé retorts, causing Alya to storm away. Adrien, who has just entered the school, greets Chloé, who runs towards him as everyone else recognizes who he is.

Marinette follows Ivan and advises him to tell Mylène how he feels and to think positively. He agrees to this, and Marinette suggests to him various ways he can win over Mylène, inspiring him to write her a song. Marinette agrees and encourages Ivan's idea reminding him again to stay positive. Feeling better, Ivan silently thanks Marinette and runs off after to work on his song. Hawk Moth angrily notices Ivan's negative emotions are fading.

Adrien is led around the school by Chloé as he signs autographs along the way. She leads him into his class and directs him to a seat at the front, in front of her. He sits himself down next to Nino, who ignores him as he's friends with Chloé. Adrien is surprised by this. But then he spots Chloé sticking a piece of gum on a seat. He questions her and goes to remove the gum himself.

Meanwhile, Marinette is walking to her class with Alya and slips her Miraculous into Alya's bag. They enter the class and see Adrien hunched over her seat, supposedly sticking gum on it. Marinette angrily confronts him as he tries to defend himself to no use. Marinette places a napkin over the gum and angrily sits down. Alya and Marinette soon identify that Adrien is a famous model and the son of Marinette's favorite fashion designer, Gabriel Agreste. They shake their heads in distaste. Nino, however, recognizes that Adrien is nice and agrees to be his new friend.

Mylène is running out of the bathroom, worried she'll be late for class before she bumps into Ivan. Ivan then tells her he wrote her a song and sings it loudly, causing Mylène to run away. Ivan grows angry once more and becomes re-akumatized. With his re-akumatization, all the immobilized Stonehearts come to life and begin to terrorize Paris.

In class, Miss Bustier is taking attendance before Ivan as Stoneheart angrily enters upon the call of his name. He kidnaps Mylène and Chloé and runs out of the classroom, pursued by Alya, who wants footage for her blog. Alya leaves her bag with the earrings behind with Marinette, so Marinette takes it and follows her. Adrien rushes to his locker to transform into Cat Noir.

Chloé continues to complain as she is carried off by Stoneheart before Cat Noir swings in and hits Stoneheart, causing him to only grow bigger. At Chloé's request for the cavalry, Stoneheart also brings in all of his minions. Cat Noir barely escapes them as the original Stoneheart runs off with Myène and Chloé. Alya heads straight into the commotion in an effort to capture footage of Ladybug saving the day, but she gets crushed by a car against a building. At this point, Marinette is left in turmoil as she struggles on what to do as Alya and Cat Noir scream for help. Marinette, left with no choice, puts the earrings on. Tikki delightfully appears and Marinette tells her she has decided to continue as Ladybug, to which Tikki replies that she eventually knew she'll come around. Marinette admits she's not sure she's up for the task, but her friend needs her, and that she can't sit back and do nothing; she transforms into Ladybug. Once she has become Ladybug, she lifts the car, freeing Alya; she then tells Alya to leave and that it's too dangerous.

Ladybug swings off and hands Cat Noir his staff, which he uses to escape a Stoneheart. After some talking, the two go to pursue the original Stoneheart on the Eiffel Tower. Atop the Eiffel Tower, Stoneheart decides to throw Chloé off the tower to get rid of her. As Chloé approaches the ground fearfully, Ladybug suddenly catches her, saving her life.

As the police prepare to fire, Ladybug argues with Roger Raincomprix, who tells her to leave the work to the professionals. Ladybug begins to doubt herself, but it doesn't take long for Cat Noir to reassure her that she can do this, telling her that without her, Chloé would no longer be there. Suddenly, Stoneheart coughs, spits out a swarm of akumas, and falls down, and Hawk Moth's face made out of akumas appears. He tells all of Paris his name and then demands Ladybug and Cat Noir give up their Miraculouses. Ladybug retorts and asserts that Hawk Moth can't just reverse the roles of the heroes and the villain. She uses her yo-yo to defeat the head of Hawk Moth, standing up for herself and all of Paris before purifying Hawk Moth's akumas. Cat Noir smiles, realizing he is in love with whoever Ladybug is.

The two heroes then return their focus to Stoneheart. Back in his lair, Hawk Moth, angry about the heroes being too 'heroic', convinces Stoneheart to attack Ladybug and Cat Noir. Stoneheart complies and summons his entire army to surround them. In a pinch, Ladybug comes up with a plan to bring Stoneheart and Mylène closer together. Ladybug makes her way to the top of the Eiffel Tower and comforts a scared Mylène.

She summons her Lucky Charm, a parachute. Ladybug uses her yo-yo to bring Mylène and Stoneheart together so that they kiss, causing the surprised Stoneheart to release both Mylène and his crumpled up song, the akumatized object. Both begin falling, and Ladybug goes after the akumatized object, purifying it. She utilizes the parachute to rescue Mylène, telling Cat Noir to take care of Ivan.

Cat Noir uses his Cataclysm to create a platform and saves Ivan. Ladybug swings back up and purifies the akuma. She then throws the parachute into the air and its energy returns everything to normal producing the first Miraculous Ladybug event. In his lair, Hawk Moth vows to one day get their Miraculouses and have his secret dream come true.

After rescuing both, Ladybug tells Mylène to read the lyrics to Ivan's song, and after she does, Mylène thanks him before hugging him, causing him to blush. The two new heroes watch the couple with shared smiles before Ladybug's earrings beep reminding her of the time limit of her Miraculous. She says she'll see him soon to Cat Noir and he responds that he can't wait.

The next day at school, Marinette and Alya relate the events of yesterday. Alya apparently missed all the action but Marinette assures her she'll get another chance in the future. Meanwhile, Adrien's car parks outside the school. Inside the car, Adrien is having a video conference with his father. Gabriel scolds his son for attending the school without his permission. But his father surprises him with the news that he can still go to school. Adrien expresses his happiness with thanks to Nathalie and his father and quickly leaves for class.

Marinette and Alya are about to take their usual seats in the classroom, but Marinette changes her mind and sits in her old spot. When Chloé questions the sudden change in seating arrangements, Marinette stands up to her and tells Chloé to take her attitude elsewhere, which makes the class laugh. When Adrien arrives, Marinette ignores his attempt to talk to her, still mad about the gum yesterday, but Nino urges him to be honest with her.

Later at the end of the day, Adrien finds Marinette standing alone without an umbrella in the rain. He explains to her that Chloé put the gum on her seat and he was attempting to remove it. He hands her his umbrella, and they share brief eye contact through the exchange, with Marinette falling in love with him in the process. The umbrella suddenly closes over Marinette's head, causing Adrien to laugh, resulting in Marinette smiling and laughing as well.

After they part ways, Marinette finds herself stuttering when she tries to say goodbye, and Adrien is overjoyed to have made a new friend. In the distance, Wang Fu and Wayzz watch the two new heroes, glad the Miraculouses are in the right hands. A satisfied Wayzz congratulates his master for an excellent choice for choosing the ones who can be trusted as Fu says that both are made for each other, and the episode ends.