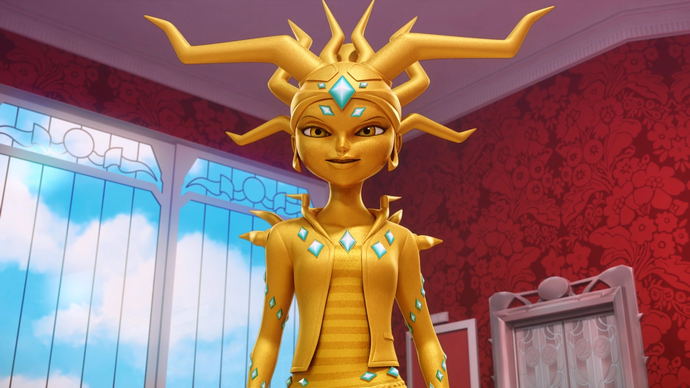 A newcomer to Marinette's circle of friends gets akumatized into Sole Crusher, a humongous supervillain who can absorb people.[5]

The episode starts with a taxi driver giving Zoé a tour of Paris. They pass by multiple landmarks such as the Eiffel Tower, Jardins du Trocadero and the Louvre. During the tour, Zoé sees the Tom & Sabine Boulangerie Patisserie, and asks the taxi driver to stop, saying that she always wanted to eat Parisian croissants. Inside the bakery, Zoé asks Sabine Cheng for some croissants, and receives them quickly. Marinette then walks in the bakery with a box of apples and accidently bumps into Zoé. Marinette apologizes, but Zoé says it's ok. Zoé helps Marinette up, and Marinette begins to explain how clumsy she is. Zoé laughs, and helps Marinette place the apples in the box. Marinette asks if Zoé needs anything, but she says she is okay. Marinette, however, still asks if Zoé can have twelve croissants, but then stops since she doesn't know her name. Zoé tells her name to Marinette, and Marinette says she is Miss Clumsy. She asks Zoé on where she is from since she looked stylish, Zoé tells Marinette that she is from New York and she had come to live with her maternal family that is living in Paris. Marinette notices Zoé's sneakers, and asks if she drew in them on her own. Zoé tells that she wrote everything that was good that was been told to her. Marinette notices there's only one thing, Zoé answers saying that she only had one friend. Marinette tells Zoé that she and her friends are going to make a show in the Liberty that night in the Seine river. Before going, Marinette writes down her number on the box she ordered, while Zoé writes downs her number on Marinette's hand.

A while after, Zoé arrives at the Le Grand Paris hotel, and Zoé gives the croissants to the taxi driver and tells her that it's for her children, and she asks if she doesn't want to give them to her family, and she says no, she think's they're not so sweet, and the taxi driver thanks Zoé and tells her to enjoy the trip, as Zoé looks at Marinette's number, as she stores the box in her purse. At the entrance, Butler Jean greets her, and takes her inside to see her mother, Audrey Bourgeois. Zoé tries to put on a mean façade in order to match her mother's demeanour, saying that her flight was horrible. When asked about her school, Zoé claims that she found a cockroach her locker, blaming it on the school.

Zoé is taken to meet Chloé, her half-sister. Chloé looks her up and down, telling her that she physically looks like family. She shows disgust at Zoé' phone and sneakers, and opts to replace them with diamond ones that she must earn. Chloé continues by saying that, in life, there are winners and losers, and you are either one of those. Zoé continues to act mean to as to appease Chloé, who decides to be her 'mentor'.

At school, Chloé introduces Zoé to the student body, demanding that they treat her with respect. Alya, Rose, Juleka, and Alix immediately think the new girl is bad news, like a second Chloé, but Marinette puts their anger to rest by saying not to judge quickly. She tries to talk to Zoé and ask about the macaroons. When Chloé gets angered over the fact that they seem to know each other, Zoé claims she had 'good taste' and threw the macaroons away. Disheartened, Marinette leaves, and Zoé gains admiration from her sister and Sabrina.

Zoé is eventually settled into Ms. Mendeleiev's class after threatening to call her stepfather. In art class, the girls discuss ways to get Zoé away from her sister's toxic influence, with Rose asking if they could adopt her. Marinette says she'll make the first move. On the way home, Chloé finally allows Zoé to have the diamond heels she promised.

At home, Marinette ponders why Zoé was so mean earlier; Daizzi suggests it was because she was hungry. Confident that Zoé's true self was the one in the morning, Marinette texts her; Tikki says that as long as she acts with good intent, nothing bad will happen. Back at the hotel, Chloé searches for the shoes while Zoé receives the text, saying they can talk in private and that she's still invited to the party that evening. Zoé writes back that she'll explain everything later. Chloé notices this and is infuriated, telling Zoé that she either walks over others or she walks on her and that Zoé should be proud to be in the family. Zoé, acting mean once more, says she plans to humiliate Marinette by throwing the macaroons in the river. Buying this, Chloé begins writing down other ways to ruin Marinette's life while Zoé steps onto the balcony.

Looking out onto the city, Zoé contemplates throwing the shoes away, but relents. She is noticed by André, who asks if she's okay. He tells her that he used to be a filmmaker, but was pushed into politics by his family. Zoé explains that, back home, she liked acting, but ended up acting so much she tried to please everyone and concealed her true self. André shows her his 'dream depository' where he keeps his movie scripts and supplies away from Audrey and Chloé so that they would accept him, and says he can make room for her things. Saddened and remembering Chloé's harsh words, Zoé ends up putting her sneakers in. Meanwhile, Shadow Moth detects Zoé's sadness and lack of acceptance, sending out an akuma for her.

As Zoé puts on the diamond shoes, the akuma infects her old sneakers. Shadow Moth christens her 'Sole Crusher', offering her the power to get revenge on Chloé. Zoé accepts and transforms as André runs to hide. Now Sole Crusher, she uses her powers to absorb Butler Jean and the hotel residents into her shoes, making her grow to a gigantic size. When she comes for Chloé, the latter runs away, eventually stopping at the bakery and causing Tom and Sabine to get absorbed. She breaks into Marinette's room and barricades the door, but Sole Crusher simply tears the roof open. Chloé pushes Marinette into the villain's grasp, but Sole Crusher simply holds Marinette (due to her earlier kindness towards her) and continues chasing Chloé across the city. Tikki instructs Kaalki to teleport to Plagg and send for Cat Noir, before leaving to be with Marinette. Though hesitant at first, Kaalki opens Voyage into Adrien's room, but it has the side effect of sucking Plagg's camembert into space and Adrien's foosball table into somewhere in the wild. Adrien is caught up and transforms.

Sole Crusher continues her rampage as Chloé gets near the Liberty, where Kitty Section is setting up. Chloé tells her sister that she should pick on the 'losers' instead of her, calling her a ridiculous copy of herself. Marinette says that Zoé shouldn't need to crush anyone as Cat Noir shows up. Marinette continues, saying that it's just unique people and that Zoé will always have someone like her to help when she falls. Shadow Moth contacts Sole Crusher, threatening to remove her powers and put her on the losers' side. Sole Crusher listens to her master and continues, saying that no one will boss her around again. Cat Noir trips Sole Crusher with his baton, causing Marinette to be freed. She runs into a safe spot and reunites with Tikki. She then transforms into Ladybug.

The heroes fight Sole Crusher, but their battle ends up causing mass destruction. Ladybug summons her Lucky Charm, receiving a shoehorn. She takes this as a hint that the akuma is in one of Sole Crusher's shoes. Cat Noir Cataclysms her right heel and Ladybug breaks the left one with her yo-yo; this knocks Sole Crusher off-balance, but no akuma comes out of either one. Chloé yells at her sister for causing harm to her expensive shoes and tells her to go back to her old sneakers. As Chloé is finally absorbed, the heroes realize the akuma's true hiding spot and race to the Hotel to search Chloé's room. They find nothing, but André comes out of hiding and says he knows the sneakers' location. As they reach the depository, Sole Crusher arrives, now bigger than the building itself, and winds up for a punch. Ladybug uses the shoehorn to quickly open the bin and rip up the infected shoe. She purifies the akuma, repairs the damage with Miraculous Ladybug, and gives the freed Zoé a Magical Charm. Thankful, Zoé says the heroes are truly miraculous as they leave. Vengeful, Shadow Moth tells Ladybug that he will crush her one day.

In the evening, Zoé is welcomed aboard the Liberty with the macaroons as Chloé and Audrey watch from the Hotel balcony. Zoé apologizes for the mess she caused, saying she only wanted to impress her family and be accepted. Back home, people bullied her and called her a loser, but she vows to be different. Ivan takes the first step and warmly hugs her, with Mylène saying that they can be her new family. Chloé is outraged as they all eat the macaroons and party into the night.

When Zoé returns to the hotel, she returns the diamond shoes and Chloé demands André to let Zoé leave Paris. André says that the paperwork will take a while, so Zoé will have to stay with them for a couple of months. Chloé wants her in the basement, but André takes her to another room instead. Away from Audrey and Chloé, Zoé thanks him and tells him not to give up on his dreams.

In bed, Marinette receives a text from Zoé, thanking her and the others for being by her side. A montage shows Zoé meeting more of Marinette's friends, and allowing Rose and Juleka to dye a strand of her hair pink, finally giving her the freedom of being her own person.