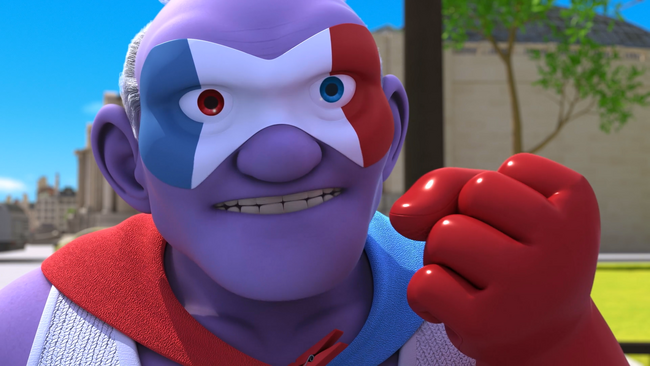 The kwamis panic as Manon shakes the sewing box. Marinette tries to distract her with an activity which would not affect the kwamis and settles on beads. Alya enters the room together with her little sisters and offers to cancel her date with Nino when she sees Manon. Marinette reassures her that she can handle the twins and Manon. Once Alya leaves, the three play with the sewing box and tickle Marinette when she takes it from them. Nino and Chris arrive, and once again, Marinette insists that she can handle the kids. Once he leaves, Marinette finds the kids playing with the kwamis. She tries to stop them, insisting that the kwamis are her secret project, kwashies, and convinces the kids to watch a movie instead. She turns on the Ladybug and Cat Noir movie as the traumatized kwamis hide. Marinette soon receives a call from Adrien, and after freaking out and being interrogated by the kids, she picks up. Adrien explains that there's no one on the set to fix his outfit and asks Marinette to help. Marinette immediately jumps at the opportunity, planning the encounter and questioned by the kids over the complexity of her plan. When the kids express their wish to be there, Marinette decides to leave them with her only relative who was home that day: Rolland.

Rolland refuses to babysit the kids, claiming that it was too complicated, and that he was busy baking brioches. Upon hearing this, the kids run into his house, excited, and start playing with the fragile and dangerous objects of his residential. Marinette leaves her laptop and turns on the movie. Rolland is baffled by the laptop, but Marinette explains that the kids know how to use it. She promises to return soon and leaves, set to "rescue" Adrien. Rolland takes the brioches out of the oven and comes to the kids, who are watching the cartoon. He is confused about the roles of the heroes and villains, and the kids explain who is who. Annoyed at the complexity of these roles, Rolland decides to watch the 1998 World Cup Finale and accidentally turns off the laptop when poking it with the cassette, much to the kids' disappointment.

At the Eiffel Tower, Marinette fixes Adrien's wing. He thanks her, and, stumbling upon her words, she thanks him for thanking her and tries to invite him to watch a movie. Adrien interrupts her rambling, explaining that he is the one thanking her, and leaves. Marinette is exasperated. Tikki advises her not to overcomplicate the situation. Marinette decides that she needs a second chance, and when she sees a man with a fishing rod, she decides to tear Adrien's wing so she could fix it again, be thanked again, and invite Adrien to the movies. She gets a phone call from an anxious Rolland and explains that she will take a little longer and then be right there.

Surrounded by the mischievous kids, Rolland cries out loud, frustrated by how complicated the modern world had become. Shadow Moth releases an akuma, which flies into Rolland's spatula. After several unsuccessful name choices, Rolland settles for the name "Simpleman" and is akumatized, set to simplify the world. The kids are scared at first, feeling guilty for causing his akumatization, but then are disappointed by the villain's unappealing look. Simpleman reassures the kids that they are not the problem, but rather the world around him. He heads towards the exit and hits the floor with the tip of his spatula, simplifying all of Paris. Simplified Shadow Moth confornts him but lets Simpleman continue when reminded of his goal: the Miraculouses.

Chaos rules among the simplified citizens: cars crash into each other to not alter their trajectory, Roger prohibits all cars that come his way, Nadja and Clara have a primitive discussion, and the helicopter pilot turns off the engine instead of keeping the helicopter up in one location. Back at the Eiffel Tower, the photographer decides to simplify the photoshoot and have Adrien standing and smiling. Marinette realizes that her plan is too complicated, reels in the rod and runs to Adrien. She is interrupted by the screams of the helicopter's passengers. She decides where to transform makes her way through a labyrinth of barriers. Meanwhile, the set leaves, satisfied by the photoshoot, and Adrien stands in the same place, deciding what he should do. He settles with following Ladybug's example and soon joins her as Cat Noir, rescuing the helicopter's passengers. The two heroes groan at having to fight a supervillain. Cat Noir suggests fighting Shadow Moth directly, and the two run off, searching for him.

The kids follow Simpleman, watching a simplified Parisian take out the trash can together with its content. They spot André and ask for ice-cream but are disappointed when the flavor is limited to vanilla. They complain that the simplified world is less interesting, interrupted by a veggie pizza rain. Despite his dislike of pizza, Simpleman, having protected the kids, agrees that having only one topping is indeed much simpler. The kids are worried and hope that Ladybug and Cat Noir come soon to defeat the villain. Just at that moment, the heroes show up, running and screaming Shadow Moth's name to grab his attention, while the latter is glad he is hidden. Ladybug and Cat Noir are startled by Simpleman, and the three squabble over their Miraculous. An appalling fight follows with the misuse of the yo-yo and staff, and the kids grow concerned. When the heroes proceed to tickling Simpleman, he decides that they were not simplified enough, and he hits the floor with his spatula once again.

The Parisians begin to act like children, using simplified words, throwing tantrums, and being arrested by an "upset" Roger. Ladybug, advised by the kids, uses her Lucky Charm, a ball, and tosses it at the villain. The ball bounces back and hits her in the face, then rolls under a car. Shadow Moth decides to bribe the heroes with candy. The heroes happily run for the candy Simpleman offers but are stopped by the kids, who tell them never to accept candy from a stranger. Ladybug and Cat Noir express their annoyance of being superheroes and try to take off their Miraculouses. The kids hold their arms and convince them to fight Simpleman. They explain that the ball should be placed under the spatula to make it bounce, and Cat Noir should then use his power. Shadow Moth points out that the kids are cheating, and Simpleman decides to simplify them, too. Chris tosses the ball to Ladybug, who throws it under the spatula. Cat Noir catches it with a Cataclysm, and Ladybug catches the akuma with her yo-yo. She uses her Miraculous Ladybug, returning everyone to normal as the kids cheer. She thanks the kids for saving them, and Cat Noir realizes with horror that they were about to give away their Miraculouses for candy. Ladybug gives Rolland a Magical Charm. He is saddened by his inability to comprehend the modern world, but the kids reassure him that they were like him in that way, and they would learn together.

At the Eiffel Tower, the photoshoot goes on. Marinette reels the rod back in, aware that she was overcomplicating the situation, and explains that her fear of rejection is the reason she comes up with her bizarre plans. She decides to confess to Adrien, but once again stumbles upon her words and proceeds to talk about fishing. She awkwardly runs away. Adrien glides on the zipline while the Vincent takes pbotographs.

Heading back towards her grandpa's residential, Marinette reflects on how difficult simplicity is. She finds Rolland and the kids watching the cartoon and suggests watching something simpler. Rolland proceeds to explaining who is who and is shushed by the kids. The six watch the movie together.