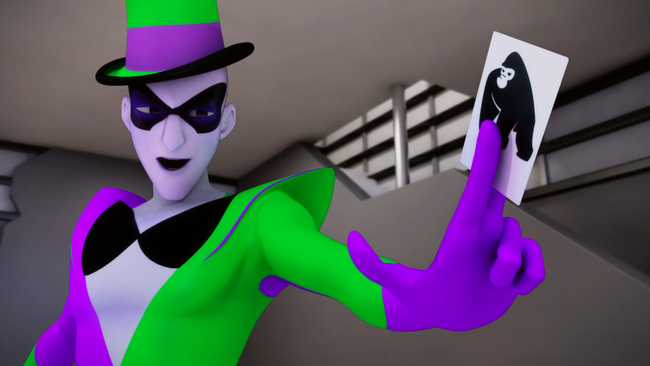 A hypnotist akumatizes into Simon Says, a villain who can make anyone obey him with his deck of cards, and seeks revenge on Adrien's father.[8]

The episode begins with a live broadcast of a KIDZ+ competition show called The Challenge at the TVi Studio. Nino is the next candidate, his challenge is to make the mayor, André Bourgeois, dance.

At the bakery, Marinette learns that she is being grounded by her parents because of how often she is absent from school, including classes like PE and Social Studies. Marinette tries to explain to her parents that Nino is counting on her to support him during The Challenge, but her father says that, as long as her unjustified absences continue, she will stay at home.

So Marinette accepts her punishment and walks up to her room. Tikki tells Marinette that it's not her parents' fault since they don't know that she's missing class to save the world. Marinette finds it unfair, and Tikki agrees, but she reminds her that if Nino wins, she can go see him at the show next week. Marinette turns on her computer and watches Nino try to complete his challenge.

Hawk Moth, in his lair, finds the concept of The Challenge to be interesting, as the TV show has the potential to cause negative emotions.

Marinette tells Alya about her parents grounding her, and Alya agrees with them, much to Marinette's surprise. Alya tells Marinette that she's always showing up late and mysteriously disappearing, and claims that she'd almost suspect her of living a double life. Marinette jokingly tells Alya to give her a break.

Nino is successful in making the mayor dance, while Adrien watches him in support, and Alec calls up the next contestant, a hypnotist named Simon Grimault. Alec tells Simon that his challenge is to hypnotize Gabriel Agreste and to make him come to the studio. But when Gabriel refuses to participate, Simon is automatically disqualified. Hawk Moth senses Simon's frustration over not even getting the chance to perform, so he sends a akuma after him.

The akuma possesses Simon's deck of hypnotic cards, and Hawk Moth offers Simon powers that'll make him a powerful hypnotist, and so he is akumatized into Simon Says. Using his cards, he hypnotizes Alec and Adrien's bodyguard, who both become his servants.

Marinette is still watching the show and sees these events unfold. Despite mentioning Tikki that she is still grounded, Tikki says that she has got no choice but to transform into Ladybug. Tikki then instructs Marinette to put her pillow under her sheet so her parents would think she is sleeping. Marinette transforms into Ladybug and heads for the studio.

At the studio, Adrien transforms into Cat Noir. Simon Says announces that since Gabriel turned down his challenge, he would make him pay by having him entertain the viewers in the TV studio by midnight, much to Cat Noir's shock. Hawk Moth hears Simon Says' announcement and says to himself that, although it's risky, this has given him an idea.

Cat Noir then jumps on top of Simon Says and demands that he give him his cards. Simon Says sends Adrien's bodyguard to fight Cat Noir. While the two are fighting, Simon Says uses his powers to enslave people in the building and sends them to find Gabriel Agreste. Ladybug arrives at the studio and finds Nino hiding in the recording room. Nino explains that Adrien is somewhere in the studio, so they both start searching for him.

After throwing his bodyguard into an elevator, Cat Noir uses his Cataclysm on the elevator's control panel, causing it to drop down the shaft. Cat Noir then meets Ladybug and Nino, and they conclude that Simon Says is going after Gabriel. Cat Noir tells them they have to get to the Agreste mansion before Simon Says can, but he realizes that he is about to detransform. Ladybug tells Cat Noir that she will look for Nino’s friend, but Cat Noir tells her to forget it since he has probably been hypnotized. Nino tells Cat Noir that Adrien is his buddy, so Cat Noir agrees to let them look for him and he tells them to meet him at Gabriel Agreste's mansion later on. After Cat Noir runs off and detransforms, he meets up with Ladybug and Nino, and they all head for the mansion.

At the mansion, Gabriel refuses to listen when Adrien tries to warn him about Simon Says and sends Adrien and Nino to Adrien's room with Nathalie. Gabriel then apologizes to Ladybug about Adrien's behavior, stating that he is just like his mother. When Ladybug tries to warn Gabriel about how dangerous Simon Says is, he replies by saying that he trusts her to protect him.

Once Adrien gets to his room with Nino, he tells Nino that he needs to take a shower. While in the bathroom, he transforms into Cat Noir.

Meanwhile, Ladybug is admiring Gabriel's pictures of Adrien and agrees with Gabriel when he says that Adrien is perfect. Gabriel takes a strange interest in Ladybug's earrings and reaches out to take a closer look at them, but before he can, Ladybug gets a call from Cat Noir, who tells her that Simon Says is coming.

Cat Noir meets Ladybug and Gabriel in Gabriel's office and warns them that Simon Says and his army have arrived, and tells Gabriel to activate the mansion's defense system. After doing so, Gabriel asks Cat Noir how he knows so much about the system, to which Cat Noir replies that in a house like his, there's bound to be one. Meanwhile, the servants of Simon Says begin to break through the mansion's defenses.

Ladybug and Nathalie go to Adrien’s room make sure he and Nino are all right. Cat Noir tells Gabriel to hide in the atrium as it is not safe where he is now, but Gabriel refuses to listen to Cat Noir, saying that no one, not even a superhero, tells him what to do. Cat Noir gets angry and tells Gabriel that he's in danger like everyone else and to just do what he tells him, much to Gabriel's surprise. He tells the superhero that he reminds him of someone. After Cat Noir leaves, Gabriel faces a portrait of his wife.

Simon Says is delighted since his army is getting closer to breaking into the mansion. However, Hawk Moth strangely tells Simon Says that he doesn't think what he is doing is such a good idea and to not forget their deal. Simon Says assures Hawk Moth that he'll defeat Ladybug and Cat Noir.

Ladybug warns Nino about what's happening, and he and Nathalie leave Adrien's room while Ladybug calls for Adrien to get out of the shower. Cat Noir climbs in the bathroom window and hears Ladybug calling for Adrien. Quickly, he detransforms while turning on the shower. Ladybug opens the shower door and tells Adrien that they need to go, and freaks out when she realizes Adrien may not have his clothes on. Adrien says that he needs to get dressed and then they can go.

As Ladybug waits for Adrien to come out of the bathroom, she notices the person on the wallpaper of Adrien's computer. When he leaves the bathroom, Adrien reveals to Ladybug that the person is his mother on her seventeenth birthday. Both simultaneously tell each other, "she's got your eyes." Suddenly, hypnotized servants of Simon Says break into the room. Ladybug pushes Adrien back into his bathroom to keep him safe. In the bathroom, Plagg teases Adrien, stating that Ladybug actually does love him, but only as Adrien. Adrien ignores Plagg's teasing and transforms into Cat Noir again.

The servants of Simon Says break into the mansion and capture Gabriel. Simon Says brings Gabriel back to the TVi Studio, where he hypnotizes him to think he is a butterfly. By the time Ladybug and Cat Noir reach to the outside of the recording room of the studio, Ladybug assumes that the akuma is inside one of the cards.

As they break in, Ladybug uses Lucky Charm, which gives her a normal yo-yo. Ladybug tries to attack Simon Says with her magical yo-yo, but Simon Says uses a card to make it useless. Cat Noir attacks Simon Says while Ladybug rapidly rips up the villain's cards to look for the akuma.

Simon Says then hypnotizes Gabriel to think he is a plane, sending him to jump off the studio roof. Cat Noir attempts to run after him, but Ladybug determines that the best course of action would be to defeat Simon Says as quickly as possible, rather than going to try to save Gabriel.

Ladybug then uses her normal yo-yo to knock Simon Says' pack of cards out of his hands. Cat Noir uses Cataclysm to destroy the pack of cards and tosses the pack to Ladybug, who breaks it and reveals the akuma. She then tosses her Lucky Charm yo-yo and cleanses the city, returning everything except Simon back to normal. She then captures and purifies the akuma, returning Simon back to normal. Afterward, Ladybug and Cat Noir go to the roof and check on Gabriel. When Cat Noir and Gabriel shake hands, the latter looks closely at Cat Noir's ring before he and Ladybug leave.

Back at the Agreste mansion, Adrien is sadly looking at pictures of his mother when Gabriel suddenly walks into his room and gives him a hug, much to Adrien’s surprise and pleasure. Then, Gabriel notices Adrien's ring and asks about it, having never noticed it before. Adrien avoids the question by asking his father if that's the only thing he's never noticed about him, and Gabriel tells Adrien he's glad everything worked out for the best before leaving the room.

At the bakery, Tom and Sabine tell Marinette that because she has had a perfect week of attendance at school, she can go and meet Nino for the second round of The Challenge. Marinette decides that she would rather stay at home and watch The Challenge with her parents. However, when she hears that Nino wants Ladybug and Cat Noir to be there for the challenge, she makes an excuse and leaves for the studio.