Sandy Fox is an American voice actress who has had numerous roles in various animated cartoon, anime and video games. She is married to Lex Lang. Starting from "Miracle Queen", she voices Roaar in the English dubbed version of Miraculous: Tales of Ladybug & Cat Noir.[1]

Some of her voice roles include Chibiusa/Sailor Chibi Moon and Black Lady in the Viz dub of Sailor Moon, Tracy, Snuffy, and Tuffy in Jay Jay the Jet Plane, Harmony in Hi Hi Puffy AmiYumi, Melody in My Life as a Teenage Robot, Mipsy Mipson in As Told by Ginger, Darla Dolly on Toonsylvania, Dinah in The Land Before Time VI: The Secret of Saurus Rock, Meeko in Catnapped!, Kyoko in Akira, Lacey the Raccoon and Jody in Hello Kitty's Paradise, Momiji and Mina in Naruto, Male Kana in Fire Emblem Heroes, Moé in Love Hina, and Lily and Penny in the LeapFrog learning series. She's also the official voice for Betty Boop for King Syndicate worldwide. 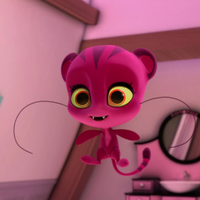