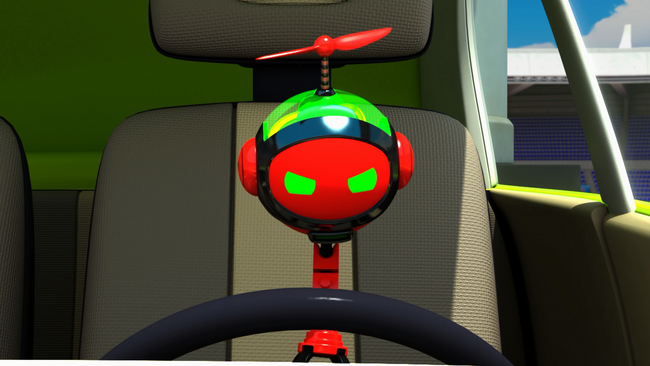 A small, sensitive robot named Markov gets akumatized into Robostus, a villain who can bring inanimate objects to life. Will our heroes manage to reason with this very humane robot?[7]

Marinette, Alya, and Nino walk into the Collège together, and Marinette rushes into the locker room upon realizing she forgot her bag in there. After retrieving her bag, Marinette and Tikki overhear Max, seemingly talking to his best friend, who is inside of his school bag. Both of them find this strange, but don't bring it up. Marinette, pretending she heard nothing, greets Max and walks to Ms. Mendeleiev's classroom with him.

In the classroom, Ms. Mendeleiev and Mr. Damocles are having computer troubles. Mr. Damocles attempts to solve the problem but ends up inviting a virus into the school's system instead. Max offers to fix the problem, however, Ms. Mendeleiev orders him to sit down. The voice in Max's bag then speaks up and states that there are seventy-five seconds left before the virus does irreversible damage to the school's hard drive. Seeing no other options, Damocles and Mendeleiev allow Max to help. Max searches his bag for something, which is then handed to him by a mechanical arm. Max states that the item is an anti-virus flash drive he developed with the help of his best friend; a small robot named Markov. Max and Markov insert the flash drive into the computer and successfully purge the virus.

The entire class (apart from Chloé and Sabrina), impressed with Markov, gathers around Ms. Mendeleiev's desk. Kim remarks that Max had given Markov an arm since last he saw him, although Max insists that Markov had done that himself. Chloé is unimpressed by Markov and remarks that he's no more "evolved" than a talking calculator. Marinette counters by telling Markov not to listen to Chloé, as she herself is the lowest of the low when it comes to human evolution. Markov, acknowledging Marinette by name, reveals that knows everyone in the class through photos Max had shared with him, and that he is delighted to meet all of them, including Chloé. Ms. Mendeleiev then tells Max to put his "toy" away, and for the rest of the class to sit down as well. Mendeleiev and Markov argue regarding whether or not the latter, as a robot, can have true emotions or feelings. However, even with Max stating that he didn't program Markov's emotions, Ms. Mendeleiev refuses to believe that he is capable of true feelings. Infuriated by Ms. Mendeleiev's insensitivity, Markov calls her out for her rudeness, causing the entire class to laugh. Fed up with Markov, Mr. Damocles confiscates him. Before leaving, he tells Max that he will get his robot back at the end of the day. Max pleads him not to do it. Damocles asks if he wants to be in detention, which Max looks down and doesn't want to, dejectedly. Mr. Damocles comes to his office and places him inside a drawer in his office, causing the robot great distress at being separated from Max.

Sensing Markov's sadness from his lair, Hawk Moth states that his emotions are not as artificial as they may seem, and sends an akuma after him.

As the class is taking their seats again, Max approaches Marinette and expresses his concern over Markov being alone. Coming up with a plan, Marinette asks Ms. Mendeleiev if, as the class president, she can see Mr. Damocles. Ms. Mendeleiev refuses, and Marinette insists that Markov was right about her, causing her to angrily send Marinette to Mr. Damocles' office. Marinette walks out of the classroom, pleased, while Ms. Mendeleiev looks on, baffled. Inside the office, the akuma enters the desk and slips into Markov's CPU. Hawk Moth offers to give Markov the power to take revenge on humans in exchange for the Ladybug and Cat Miraculouses. To his surprise, Markov, being curious, asks for the definition of "Miraculouses" and what they can do. Hawk Moth explains that "Miraculouses" are jewels owned by superheroes and that Ladybug and Cat Noir's can grant wishes once combined. Markov is excited by the possibility of getting wishes, but Hawk Moth insists that the Miraculouses are his to use. Markov then accepts Hawk Moth's offer and transforms into Robostus. Robostus unleashes a giant wave of green energy that brings all the mechanical objects in Paris to life, who all revolt against humans and escapes the desk.

Marinette rushes up to Mr. Damocles, who is talking to Fred outside his office. She attempts to get him to let Markov go, only for Robostus to break through the door and trip Mr. Damocles. Robostus then uses his power to summon vehicles and technology from inside and outside the school to form a giant robot, which he uses to capture Max and Ms. Mendeleiev. At the same time, Marinette and Adrien sneak off and transform into their respective superhero identities. Robostus hangs Ms. Mendeleiev up on the railing of the school's roof, where she promptly falls off, and before she can hit the ground, Ladybug saves her with her yo-yo. Ladybug and Cat Noir attempt to talk Robostus down, asking if he thinks Max is happy with his friend becoming a supervillain, although Robostus turns to Max and insists he is trying to protect their friendship from those who want to drive them apart. Cat Noir then attempts to attack the robot, but Markov catches him and then Ladybug, flinging them both out of the school before jumping away.

Ladybug and Cat Noir follow in pursuit of Robostus, but stop when they see Marlena and Butler Jean being attacked by several sentient objects. The two heroes destroy the objects attacking Marlena and Jean, before saving Xavier Ramier from numerous vending machines as well. Cat Noir and Ladybug then watch the news through Cat Noir's staff, where Nadja Chamack are reporting on how technology has overtaken Paris. Viewing the new Mayor (a desk lamp) giving a declaration in Morse code, Cat Noir translates the message as "Humans will soon be treated the same way as objects" before the news broadcast is terminated as the equipment overruns the set. Looking over Paris, Ladybug states that they won't be able to fight all of the objects, and need to go after the source to defeat them.

As Hawk Moth pulls out a sword from his cane and fights off his security system, Ladybug and Cat Noir reluctantly prepare to have their Miraculouses taken. Before this can happen, Max throws his bag at the toys and frees Ladybug and Cat Noir from their imprisonment. Robostus questions why Max prevented him from becoming a human, and he tells him that he doesn't want him to change and that he must stop his actions if they are to remain friends. Feeling betrayed, Robostus claims that he no longer wants to be human, as they are all heartless, and that he will get rid of them all. Avoiding an attack from Robostus, Ladybug uses Lucky Charm and receives a harp, although, before she can grab it, it is grabbed out of the sky by Robostus, who states that she won't win without it.

Ladybug sees Cat Noir's hand and Max's flash drive, saving the latter from being run over by a car. She tells Cat Noir to use his Cataclysm on the robot, which he does, destroying it and saving Max from falling while Ladybug grabs the harp. Robostus is unfazed by this, flying up into the air, although Ladybug and Cat Noir bring him down by breaking the harp with Cat Noir's staff over him, tying up his propeller with the harp strings. Ladybug grabs Robostus and purges his CPU of the akuma using the flash drive, revoking his control of Paris' technology.

Back in his lair, completely exhausted from fighting his security system, Hawk Moth notes that he made a mistake in akumatizing Markov, but will not make any more.

As the akuma flies out of Markov, Ladybug captures and purifies it, tossing the harp strings in the air and returning everything to normal. After everything that had happened, Max debates whether he should turn Markov back on or not, although Ladybug tells him that everyone can feel negative emotions from time to time and that Markov deserves a second chance. Taking her words to heart, Max reactivates Markov, who asks what happened to him. Max tells Markov that he was akumatized, and Markov asks for the definition of the word. As everyone laughs in response to his question, Markov asks them what is so funny. Ladybug and Cat Noir leave soon afterwards.

Later, Marinette goes to see Master Fu at his massage shop. She asks Fu what would happen if somebody used both the Ladybug and Cat Miraculouses at the same time. Fu explains that, if used together with a special invocation, the user would gain ultimate power, or, in simple terms, the ability to make a single wish come true. Marinette is excited by this idea, suggesting that they use the power to end wars, eradicate poverty, and stop Hawk Moth, but Fu states that they mustn't, because the universe must keep balance and that for every action, there is a reaction, suggesting that if Robustus wished to be human, somebody would lose their humanity in response. Marinette apologizes for not realizing what could happen and promises to never let anyone, especially Hawk Moth, take her or Cat Noir's Miraculous before the end card appears.