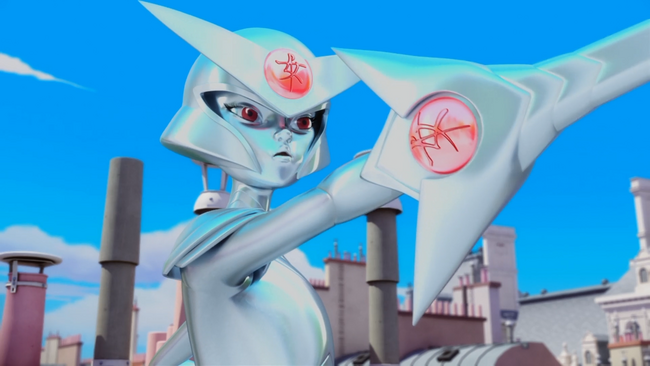 A fencing opponent who loses a duel against Adrien gets akumatized and goes after him for a rematch while only Ladybug is around to protect him.[6]

A mysterious masked fencer gets akumatized into Riposte.[7]

Marinette has hopes of joining Armand D'Argencourt's fencing school. Although Marinette's worried and nervous, Tikki assures her that she will do a good job. Marinette then clumsily knocks down several helmets, although ends up finding one her size. On the fencing court, D'Argencourt assigns the new recruits to fence with the old ones in order to find out who is capable of filling the only open spot. Marinette is paired with Adrien, who helps teach her some techniques. Adrien also explains that in fencing, who touches their opponent first isn't necessarily the one who gets the point.

A new fencer then arrives and demands to be enrolled in the class. D'Argencourt tells the new student that only the best can join his school, and the challenger claims to have been the best everywhere they had gone. D'Argencourt tells the student that, in order to be accepted, they must beat one of the other students, and the fencer immediately ask who the best fencer in the class is. The other students single out Adrien. As he and the new student take their stances, Marinette laments about the latter going to get the position on the fencing team due to "that guy's" obvious skill, although another student tells her that the new challenger must beat Adrien first.

Sensing the student's anger and disappointment, Hawk Moth sends an akuma after them.

Believing that the new student struck first, Adrien runs outside to offer them a rematch. Adrien confronts the student outside their car, who then removes their helmet, revealing themself to be a girl. Adrien offers her the rematch, however, the students declines, claiming that there are no second chances in her family, and leaves. Adrien then enters his car and tells his bodyguard to follow the student. As this happens, Marinette sees the akuma and transforms into Ladybug in order to capture it.

In the car, the student leaves a message for her mother in which she regretfully states that she lost and will not be joining D'Argencourt's school. She then looks at her ring, which the akuma then settles inside. Hawk Moth then offers her the chance to be the best fencer once again in exchange for the Ladybug and Cat Miraculouses, transforming her into Riposte. Riposte then slices through the roof of her car and jumps into the air.

Meanwhile, Adrien researches the new student on his phone while Plagg watches, and finds out that she is the only child of a prestigious fencing family, her mother and father both being world champions. Riposte then falls out of the sky and cleaves Adrien's car in half. Riposte tells Adrien that she accepts his offer of a rematch, although he refuses to fight her in her current form. Before she can attack, Hawk Moth stops Riposte and tells her that she must take Ladybug and Cat Miraculous first. Riposte agrees and decides to wait for Ladybug and Cat Noir to show up. On cue, Ladybug arrives and uses her yo-yo to grab Riposte's sword, however, she is surprised to find it's fused with her hand. Riposte attacks Ladybug with a flurry of sword strikes, which Ladybug blocks, and Adrien tosses Ladybug the student's discarded sabre. Even with the sabre, Ladybug finds herself outmatched by Riposte, who knocks her to the ground and attempts to strike her. Adrien saves Ladybug before Riposte's hit can land, although sprains his left ankle in the process.

Ladybug and Adrien then swing themselves to a rooftop and hide behind a chimney. Ladybug states that it will be hard to both fight Riposte and guard Adrien, and calls Cat Noir, who does not respond, Adrien suggests that he could be busy. Riposte destroys the chimney, and they attempt to talk things out with her, although she states that the damage has already been done and attacks. Ladybug fights Riposte and buries her in a pile of rubble while Adrien limps away and hides. He attempts to transform, however, Ladybug interrupts him and takes them to find a safe hiding place. As this happens, Riposte frees herself.

Ladybug takes Adrien to the Louvre, and after getting the citizens to peacefully escort themselves away from the area, she hides him inside a sarcophagus. Riposte soon catches up to them, breaks into the Louvre and demands Ladybug tell her where Adrien is. She refuses, and the two begin to fight. Adrien uses his time alone to transform into Cat Noir, however, he finds that his ankle is still injured. Riposte attempts to strike Ladybug, only for Cat Noir to block her sword with his staff. They manage to corner Riposte, however, she knocks Cat Noir back (unintentionally hurting his sprained ankle), and forces Ladybug out of the room, which she then seals off using the security system. Riposte chases after her while Cat Noir uses his Cataclysm to destroy the bars.

Upon entering the Egyptian exhibit, Riposte realizes that Adrien is inside the sarcophagus and destroys it. To the surprise of both Ladybug and Riposte, he isn't inside the sarcophagus. Ladybug seals off the room as Cat Noir enters and the two continue to fight with Riposte. Ladybug then uses her Lucky Charm, receiving a radiator, and realizes that the akuma is inside Riposte's sword. Using her Lucky Vision, Ladybug spots Cat Noir's belt, Riposte's sword, and the radiator, and comes up with a plan. She and Cat Noir tie the belt to Riposte's sword as she sticks it through the radiator, and use the force of the object to break the sword apart. She purifies the akuma and tosses the radiator in the air, turning everything back to normal. Cat Noir then claims to need to see the veterinarian and runs off to detransform as Ladybug walks Kagami out of the room.

Ladybug wonders where Adrien could have gone, and he reappears from behind a statue. But realizes that she is about to detransform and tells him to give the fencer her sword back. As Ladybug leaves, Adrien secretly blows her a kiss. Outside, Adrien catches the fencer, who apologizes as he does. He tries to return the saber, although the fencer tells him to keep it, as she had lost. Adrien remarks that she should have won, and that Marinette flusters easily, but that she's kind and means well. The fencer asks if Adrien likes Marinette, and he states that she is a very good friend (to the disappointment of Marinette, who is secretly watching). Adrien finally introduces himself, and the fencer introduces herself as Kagami. Kagami's driver arrives to pick her up, and Kagami enters her car, telling Adrien to get ready for the decisive match, which he replies he can't wait for. Adrien walks into his vehicle, while Marinette laments on how she isn't satisfied with Adrien only seeing her as a friend. Tikki states that Marinette will have time to work on her fencing skills, and the two have a pretend fencing match before the end card appears.