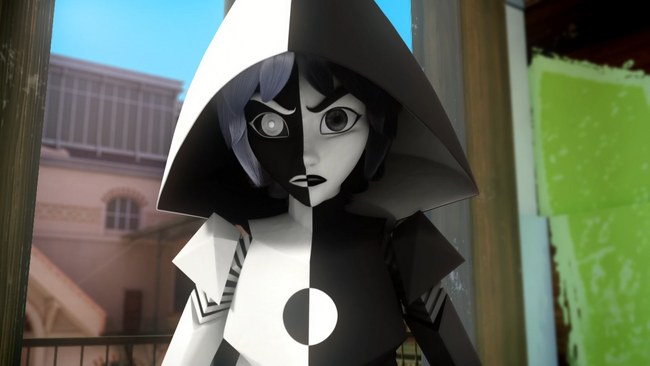 Angry over his perception that Marinette and Nathaniel humiliated him, fellow student Marc becomes Reverser, who is determined to get revenge.[9]

As the bell rings, Marinette pauses to speak to a student, Marc Anciel, who is hiding under the stairs with his notebook, writing a new installment of "Diary of Ladybug." Marinette encourages him to come to the art room and meet everyone there.

Later, Marinette, Nathaniel, and their art teacher discuss finding a creative author to help Nathaniel write scripts for his illustrated comics. Marinette spots Marc hanging out outside the classroom door, calls him in, and introduces him to everyone. They briefly discuss having Marc and Nathaniel work together, but Marc doesn't believe he has it in him. He flees the room, inadvertently dropping his “Diary of Ladybug” in the process. Marinette finds it and decides to read it in the school bathroom. She finds it to be "...not exactly the truth... but definitely a fun read!"

After she returns it to Marc, she encourages him to team up with Nathaniel, but Marc is not confident in his abilities and fears rejection. They decide to give it to Nathaniel without telling him who wrote it. While the two of them are spying on Nathaniel to see his reaction, Adrien shows up behind them, saying that it's "...a bit rude to spy on people" before winking at Marinette but she nervously says that they were working on a surprise for him for his birthday. Understanding he says that's nice of her and offers his help before leaving. Marc comments that Marinette, just like himself, is shy, to Marinette's chagrin.

Outside the school, Marinette gives Nathaniel the story, but Nathaniel had been deceived by the title and believes that Ladybug wrote the diary herself. Marinette tells Nathaniel he can meet the writer out by the fountain after school. When Nathaniel shows up, he starts blushing bright red expecting Ladybug but is shocked to find Marc instead. He believes that Marinette and Marc teamed up to play a joke on him and angrily rips up Marc’s stories and rejects Marc’s suggestion of writing a comic book together.

From his lair, Hawk Moth senses Marc’s devastation and send an akuma after him. The akuma possessed Marc's notebook and Hawk Moth greets him as Reserver, telling Marc that he giving him the power to invert anyone as long as he help in return. He agree and get akumatizes. Marinette, who watched the whole thing from her balcony, runs down to Reverser to tell him her true intentions, but he gets angry and tries to use make everyone hate Marinette. Marinette dodges his paper airplane and and runs off to transform into her superhero alter ego. Ladybug then confronts Reverser, only to be carried throughout Paris on her yo-yo string. She flies past Adrien in his car, who is stuck in traffic jam. He claims he left his fencing gloves behind and leaves to get them and then jumps out to transform.

Ladybug and Cat Noir are both hit by Reverser’s superpowers - Ladybug is hit while protecting a citizen, and Cat Noir is caught off guard by Ladybug, causing him to be hit as well. She becomes extremely clumsy and Cat Noir becomes scared of everything around him causing them to fall into the river. With the heroes weakened, Hawk Moth commands Reverser to find them. But seeing the heroes as harmless, he leaves to find and reverse Marinette and Nathaniel.

Meanwhile, Nathaniel arrives at the museum and Reverser arrives at the Art Room demanding to know where Marinette and Nathaniel are. At the same time, Cat Noir and Ladybug pull themselves to shore despite their condition. Knowing that the villain is looking for Nathaniel, Ladybug has an idea of where to find him. Cat Noir, who is still under the effects of Reverser's superpower, doesn't want to fight until Ladybug encourages him, but they realize they're not going to get very far. After taking a cab to the school, they find that Reverser has already reversed the personalities of the art class students and teacher. By looking at one of the Nathaniel's drawings, the heroes find out that he's at the Louvre Museum.

Reverser asks Chloé and Sabrina where Nathaniel and Marinette are, but when they refuse to answer, he reverses them, causing Chloé to tend to Sabrina instead of the other way around. Reverser then throws a paper airplane at Mayor André Bourgeois during his announcement of relocating trash to space dumpsters in an effort to make Paris the cleanest city. As a result, the mayor then brings the space dumpsters back to Paris. In the museum, Alix talks to Nathaniel about making up with Marc, knowing that Marinette is not the type of person who embarrasses others, to which Nathaniel believes he jumped the gun. Ladybug and Cat Noir enter the museum and they hear Reverser's ultimatum through Ladybug's yo-yo, where he demands the heroes hand over Marinette and Nathaniel as well their Miraculous to him. The heroes ask for Nathaniel's help to defeat Reverser, and Cat Noir asks about Marinette. Ladybug replies that there is no time and that Reverser will have to settle with Nathaniel. Alix wanted to help them as well, but they refused, deeming it too dangerous, but after being reminded of their reversed conditions they accepted her help.

They arrive at the Eiffel Tower and see the space dumpsters entering the atmosphere, threatening to cover the city in trash. Cat Noir quivers in fear until Ladybug reminds him that despite their condition they're still a team. She summons her Lucky Charm and receives a bamboo roll. Using a traffic cone as a makeshift megaphone Ladybug offers Cat Noir to Reverser in exchange for reversing the mayor but the villain wants Cat Noir and Nathaniel to which the heroine agrees. When they deliver Nathaniel and Cat Noir, Reverser tells them this better not be a trick but Ladybug replies that they couldn't pull a trick with their reversed states. Cat Noir jumps off while riding a kite made from his blanket and the bamboo sticks from Ladybug's lucky charm. With Alix steering the kite, he blindly uses his Cataclysm to destroy Reverser's paper hoverboard and Ladybug successfully reverses the actions of Reverser and de-evilizes the akuma.

With everything back to normal, Cat Noir saves Marc from falling, Ladybug has him and Nathaniel make up while Hawk Moth vows revenge. The next day, Nathaniel and Marc make a comic book about Reverser and they dedicate it to Marinette, saying she'd make a great hero "if she wasn't such a klutz." Marinette laughs along with her friends, and the ending card appears.