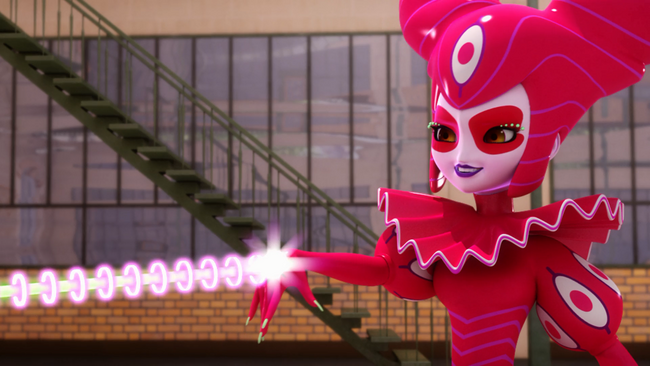 When Juleka is excluded from the class picture, she is akumatized into Reflekta and threatens to turn everyone into a reflection of herself.[6]

Excluded from a class photo, dejected Juleka akumatizes into the villain Reflekta, who turns everyone, including Cat Noir, into copies of herself.[7]

A picture-day curse takes a sinister turn when Juleka is excluded from a class picture and transforms into Reflekta, a villain who wants to turn everybody into a reflection of herself.[8]

Ms. Mendeleiev's class is taking a class photograph in the courtyard of Collège Françoise Dupont. Waiting on the steps in the courtyard is Miss Bustier's class. Marinette is freaking out about how she's going to be in the picture with Adrien, since they're all in the same class. Standing behind them are Rose and Juleka, overhearing Marinette's conversation with Alya.

Juleka doubts that she will be in the photograph, given her history of things going wrong in photos. Rose tells Juleka that she isn't cursed, but Juleka doubts it. Ever since Juleka was a little girl, whenever someone tried to take a picture of her, something would get in the way. Rose and Marinette reassure her that this year will be different and that she will definitely be seen.

Finished with Ms. Mendeleiev's class, Vincent begins adjusting his set for Miss Bustier's class using two rows of benches. Vincent makes the shorter people sit on the bench in front, those being Max, Alix, Rose, Marinette, and Mylène. For the back row, he picks Nathaniel, Alya, Sabrina, and Chloé to stand on benches. Chloé protests, stating that she must stand next to Adrien since they're the same height, using her hand to emphasize that their foreheads are at the same level. But he disagrees, prompting Chloé to bring up her father as a threat. Since Vincent has no idea who her father is, he shoots her down and waves her off, threatening to make her sit in the front row.

The rest of the students file in between the two rows, at least, all except for one. Marinette spots Juleka staying on the steps and makes Vincent halt in order to include her. He apologizes and tells Juleka that she can stand between Nino and Adrien. When she takes her place, Marinette comments that Juleka will be in the center of the photo, completely visible, and she'll destroy her "curse."

Vincent is about to take the picture but groans, finding he isn’t satisfied with the seating arrangement. He starts moving Ivan around, prompting Mr. Damocles to ask what is wrong. Chloé states that she is in the wrong spot, even after hearing him say that Ivan is throwing off the picture's harmony. She then goes as far as to try to push Juleka out of the way. Both Miss Bustier and Adrien scold her, and Vincent continues moving students around. Chloé continues her protests, saying that she is too far away from Adrien, but she is shot down again by Mr. Damocles.

Right as Vincent clicks the shutter button on his camera, the battery flashes, dead. He leaves to go get a new battery, telling the students to stay in their places. Meanwhile, Juleka asks Miss Bustier if she can use the bathroom, receiving permission. Chloé tells Sabrina to make sure Juleka doesn't come back. Sabrina runs off to the bathroom, grabs a nearby chair, and props it under the door handle of the stall Juleka's in, trapping her inside. Sabrina returns just as the photographer puts a new battery in the camera.

Chloé jumps down from the bench and stands next to Adrien, swinging an arm around him. Both Adrien and Marinette question Chloé about what she's doing there, but Vincent gets the class's attention again. Before Marinette can stop him, he takes the picture, the eyes of the students all on Chloé, except for Marinette, who is holding out an arm to stop the camera, and Adrien, whose face is directed at the camera lens by Chloé's hand.

Vincent thanks them for their time, stating that the photo is perfect, to which Marinette protests that they need to take it again and tells Mr. Damocles about Juleka, whom he does not appear to realize is anyone, let alone a student at his school. When Marinette describes her, the rest of the class realizes she is missing and wonders where she is. Adrien states that she went to the bathroom. Seeing that if they manage to get Juleka back, she would lose her spot in the picture, Chloé redirects Mr. Damocles into thinking about lunch and the other classes left to photograph, resulting in Mr. Damocles refusing to retake the picture.

During the lunch break, Rose searches for Juleka, finding her trapped in the bathroom. Freed, the first thing Juleka asks about is the photo. Rose mentions that she missed it, but it was Chloé's fault. Juleka says that she was foolish to believe that she could ever be in a decent photograph, lamenting that she is invisible and that no one ever listens to her. Rose protests, but Juleka runs out of the school to the Place des Vosges, sits on a bench and starts crying. Hawk Moth senses Juleka's sadness, and sends an akuma after her.

At Collège Françoise Dupont, Rose explains to Marinette and Alya what happened. Marinette stands up, coming up with the idea to delete the picture so that Vincent will be forced to take another picture with Juleka in it. Sabrina and Chloé stand off to the side, overhearing their plan and vowing that Marinette will not get away with it.

Back at the Place des Vosges, the Akuma possesses Juleka's wrist mirror. Hawk Moth greets her as Reflekta, telling her that he'll make it so she'll be the only one that people see and will never be ignored again so long as she helps him in return. Juleka agrees and is akumatized.

Meanwhile, Marinette sneaks inside Mr. Damocles's office to delete the photo, but Sabrina and Chloé are searching for her. Reflekta goes back inside the school and starts turning everyone into physically identical copies of herself, including poor Rose. Adrien quickly transforms himself into Cat Noir so he can stop Reflekta. Narrowly avoiding Reflekta's beam, he traps her in a basketball hoop. Cat Noir is about to use his Cataclysm on some lockers that are blocking the school's entrance. Before he can touch the lockers, Reflekta changes him into her mirror image, which also leads to Cat Noir losing his Miraculous.

At the same time, Marinette gets herself caught on purpose by Sabrina and Chloé. When Chloé shows her the video of her breaking into the office, Marinette gives her an ultimatum: give her Chloé's phone so she can delete the video or she'll erase the class photo instead. Knowing she’ll lose the picture of her and Adrien together, Chloé gives Marinette her phone. However, once the phone is in Marinette’s hands, Sabrina takes out the camera's memory card. Marinette then gives Chloé another ultimatum: give her the card or she'll keep her phone. Suddenly they hear Reflekta's voice calling Chloé's name, and Marinette grabs the card from her running off to hide.

When Chloé steps out of the office after Sabrina runs to get Marinette, Reflekta finds her and turns her into Reflekta's mirror image. Marinette sees everything and runs to hide in the library, transforming into Ladybug. Ladybug realizes that Reflekta is Juleka, and she jumps in-between Chloé and Reflekta. Ladybug then flees when Reflekta is about to zap her into her mirror image. Cat Noir watches them and begins gathering up the transformed students so they can help stop Reflekta.

Ladybug soon realizes that using her yo-yo is useless against the akumatized villain. However, before Reflekta can get Ladybug's earrings, Cat Noir and the transformed students surround them. They're about to get Reflekta, but she escapes and runs off to turn more people into her mirror image. Cat Noir takes Ladybug away from the group to talk in private. While Ladybug makes fun of his looks, Cat Noir tells her that attacking Reflekta from the front isn't the best solution, unless Ladybug changes her look, which gives Ladybug an idea. Using her yo-yo, both she and Cat Noir head to the TVi studio.

While Reflekta turns many citizens of Paris into her mirror image, Ladybug is at the TVi studio, broadcasting to everyone that they need to wear a costume so she could tell which is the real Reflekta in order to stop her. While this is happening, Reflekta corners the Mayor in his office and tells him that Ladybug is not coming to save him. Now knowing where Ladybug is, Reflekta heads for the TV studio. As "Reflekta" walks into the studio recording room, Ladybug uses her yo-yo and ties "her" up. Cat Noir quickly takes off "her" wrist mirror and tosses it to Ladybug so she can get the Akuma. After she smashes it, they find the Akuma isn't in it. Both Cat Noir and Ladybug then realize that they have been tricked and learn the imposter Reflekta is actually the Mayor.

The real Reflekta shows up and is about to zap Ladybug, but Cat Noir shields her taking the attack. The ray doesn’t affect him since he’s already been changed. Ladybug summons her Lucky Charm, and a camera appears. Ladybug tells Cat Noir to turn off the lights, and she uses the camera's flashes to temporarily blind Reflekta in order to evade her blasts. She manages to grab Reflekta's wrist mirror and breaks it, revealing the Akuma. Ladybug catches the Akuma and purifies it. She then tosses the camera into the air and cleanses the city, returning everyone, including Juleka and Cat Noir, back to normal.

As Marinette goes back to Collège Françoise Dupont, she tells Tikki that she has another idea to end Juleka's "curse". After returning Chloé's phone to her, as well as the memory card to Vincent, Marinette explains to him about Juleka not being in the picture earlier and suggests taking another picture with her in it.

When school's over, he once again takes the class picture, this time at the park. Chloé and Sabrina decide not to be in a "ridiculous" photo again, and Juleka thanks Marinette for ending her photo "curse", because she appeared in the center of every picture Vincent takes of her.