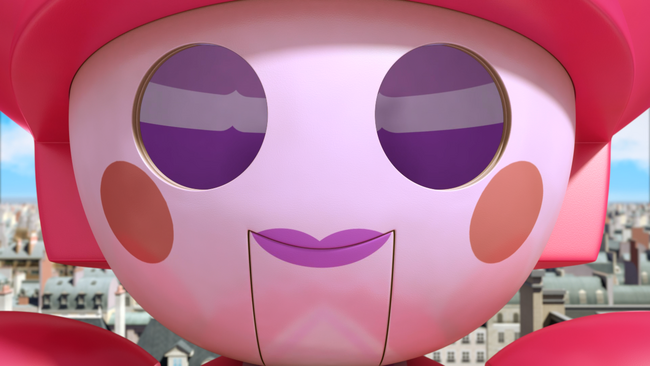 Ladybug and Cat Noir each get the others' Miraculous when they must take on Juleka, who has become Reflekta again and now has a sentimonster.[7]

After defeating another supervillain, Cat Noir tells Ladybug that she’s the superhero who captures akumas while he’s just charming and cunning. Ladybug points out that the prank he’d pulled earlier almost made her Lucky Charm fail, causing Cat Noir to tell her that Master Fu gave her the Ladybug Miraculous instead of him because she’s got no sense of humor. However, when Ladybug shows signs of irritation, Cat Noir says that she has many other great qualities, and he’s just in charge of the humor department. He bids her farewell and calls her “Bugaboo” before leaving. Ladybug yells at him to not call her Bugaboo, but he’s already left, much to her annoyance.

At the Couffaine houseboat, Juleka wants to be a model for Marinette, but she is unsure as to whether or not Marinette will pick her. Luka encourages her to go for it, commenting on how pretty she is and that she must follow her dreams. He clips her bangs back and kisses her cheek.

Later at school, since Ms. Mendeleiev is not coming to school today, school ends an hour early. Alya suggests that the girls use the extra time to model Marinette’s designs for her upcoming website and asks for a volunteer. Juleka steps up, and the girls are surprised to see her bangs clipped back, commenting on how well it suits her. They agree to let her be the model. Alya suggests to Marinette that she ask Adrien to help since he has experience with fashion shoots. Marinette is reluctant, but Alya approaches him anyways and asks. Adrien wants to but says that he must get home, or his father will be upset. However, Alya reminds him that, technically, he doesn’t have to be home for another hour since school ended early. Therefore, Adrien agrees, and Marinette faints.

In Marinette’s room, the girls and Adrien get Juleka ready. However, once they’re done, Juleka begins to feel nervous and breathes heavily. Noticing how nervous Juleka is, Marinette decides to take her place. This gives Alya the idea to have both Marinette and Adrien model Marinette’s designs since they work for girls and guys. Alya asks Adrien if he’s up for it, and he agrees. Alya drags Marinette and Adrien behind separate folding screens to change. The two discover that in order to wear the jewelry that comes with the clothes, they must take their Miraculouses off. Though both their kwamis are against this, they insist that it’ll be fine since it won’t be for long, and their kwamis will hold onto their respective Miraculouses. Once they’re all dressed, the girls admire how nice the two look in their clothes. However, Alya notices that Marinette is overheating, so she decides to take the shoot outside. While the girls head out, Juleka decides that she’d rather stay behind than go with them. Rose offers to stay with her, but Juleka insists that she go. Once they all leave, Juleka laments to herself about how she always ruins everything.

In the Agreste car, Adrien thanks his bodyguard for picking him and his friends up. When the bodyguard glares at him, Adrien reminds him that there is still a little time before school’s officially over and that he’s helping his friends out. The girls all say “please” in unison, and the bodyguard relents and drives off.

The akuma enters Juleka’s right lace glove while the amok enters her barrette. Hawk Moth offers to turn Juleka back into Reflekta, and Mayura offers her a sentimonster named Reflekdoll that will help her all in exchange for Ladybug's and Cat Noir’s Miraculouses. Juleka agrees and is transformed into Reflekta with a giant Reflekdoll under her command. She uses the doll to turn multiple people into copies of herself and heads to Trocadéro where the girls and Adrien are doing the shoot. She turns each of them into copies of herself. Rose attempts to apologize to Juleka, but Reflekta merely tries to turn her into a copy of herself. Marinette and Adrien hide to transform into their superhero selves but discover that they can’t due to their Miraculouses being in the Agreste car. In the car, Plagg comments to Tikki on how they can enjoy a snack while their owners are busy with the photoshoot, though Tikki is disgusted by the Camembert Plagg’s eating.

While Reflekta turns more people into her mirror images, Marinette and Adrien run to the car to retrieve their Miraculouses. Reflekta spots Marinette and confronts her about stealing her limelight as she was supposed to be the shoot’s star. Marinette tells her that she’d said she didn’t want to, but Reflekta claims that she didn’t let her explain and turns Marinette into her copy, stating that Marinette will likely understand her better now that she’s in Reflekta's shoes. Adrien attempts to open the trunk of the car, but Reflekdoll grabs it and throws it before turning Adrien into a copy of Reflekta. Tikki wonders how they’re going to find their owners when everyone looks the same. Plagg suggests that they look for the Miraculouses first. He finds his quickly and tells Tikki to stay focused before taking off.

Reflekta looks for Rose, wanting to turn her into her replica so that the two of them can be like twin sisters. Meanwhile, Plagg looks for Adrien but instead finds Marinette. Since there isn’t a lot of time, Marinette decides to use Cat Noir’s Miraculous herself and transforms into Lady Noire. Meanwhile, Tikki finds the Ladybug Miraculous, but seeing that Marinette is using the Cat Miraculous, she looks for Adrien. After finding him, she explains the mix-up and introduces herself. Adrien puts on the earrings and transforms into Mister Bug.

With their Miraculouses swapped, Lady Noire and Mister Bug fight Reflekta and Reflekdoll, though they have some trouble adjusting to their new powers. Hawk Moth and Mayura take note of this and encourage Reflekta to take advantage of it. Mister Bug points out that Reflekta’s akuma is likely where it was before. Lady Noire agrees but says that they’d need to check that and also points out that they don’t know where the amok is. Mister Bug believes that if he had a mirror, he could reflect Reflekta’s beams back at her. However, Lady Noire reminds him that the Lucky Charm doesn’t just give its users what they want; they have to figure out how to use it. Mister Bug decides to test that and calls on it. He receives a mirror, though Lady Noire insists that it’s beginners’ luck. However, Mister Bug quickly discovers that the mirror he got with his Lucky Charm is useless because reflecting Reflekta’s beams back at her does nothing. So Lady Noire calls on her Cataclysm and uses it on the sentimonster. However, instead of destroying it, it merely causes it to go berserk. Mayura asks Hawk Moth if she should recall the amok, but Hawk Moth says no as he believes chaos is a valuable ally.

Lady Noire and Mister Bug save Reflekta from the berserk Reflekdoll. Reflekta tries to turn them into copies of herself, but Mister Bug breaks the object containing her akuma and captures it before she can do so. Reflekta is turned back into Juleka. However, as Reflekdoll is still on a rampage, Juleka is turned into a Reflekta copy. Mister Bug offers to fix everything, but Lady Noire points out that they should stop Reflekdoll first. Mister Bug admits that being Ladybug isn’t easy and he can’t do anything without her. Lady Noire points out that Reflekta had been controlling the doll from inside and suggests going in to find the amok. Mister Bug wonders how they can do that without getting hit by its beam. Lady Noire suggests that they figure out how to use the Lucky Charm mirror first. Through analysis, Lady Noire concludes that in order to get inside Reflekdoll, they must enter through an access panel behind the doll’s head that can only be opened with a coin... or something big and round like a coin (aka the mirror). Once inside, the two realize that the amok is inside the hair clip and break it. Mister Bug purifies the amok and then uses Miraculous Mister Bug to fix all the damage.

Hawk Moth is angered by another failure, but Mayura points out that there are two of them now and promises that they’ll succeed in the end. The two detransform and Duusu calls what happened awesome, but when Nathalie falls to the floor coughing, she takes back her comment and asks Nathalie if she’s alright. Gabriel tells her that she’s fine but needs peace and quiet.

Lady Noire and Mister Bug head in separate directions and detransform. After feeding the kwamis, they each deliver the Miraculouses back to their corrected owners. Marinette and Adrien then join the girls at Trocadéro. Marinette apologizes to Juleka for stealing her spotlight and allows her to be the model again. Alya asks Adrien if he still has some time. His bodyguard is initially reluctant, but after Adrien insists that it’s important and the girls all say “please”, he relents. The shoot continues as the end card appears.