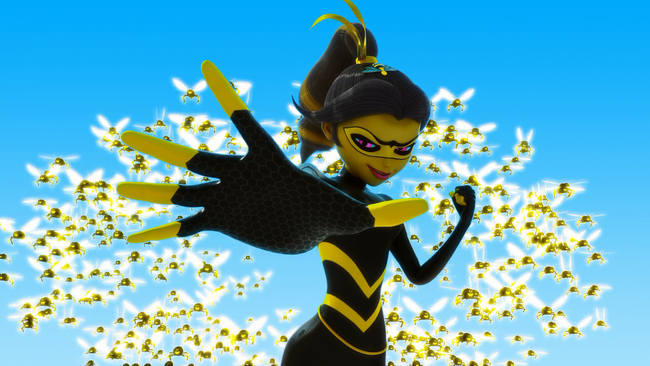 This episode is also the 2nd and final part of the 2-parter, "The Queen's Battle."[1]

In an attempt to impress her mother, Chloé tries to become the superhero Queen Bee but is instead transformed into the supervillain Queen Wasp.[7]

Picking up from "Style Queen", Gabriel is seen at his mansion's basement, speaking in front of the coffin of an unconscious Emilie. Despondent after Style Queen's defeat, he decides that he can no longer keep endangering Adrien and that he has done everything he possibly could've to get the Ladybug and Cat Miraculouses. He asks his wife for forgiveness and renounces Nooroo and the Butterfly Miraculous. He then goes to the front of his office and sadly sulks. Nathalie notices and hugs him.

The fashion show continues, with Adrien modeling Marinette's hat and Alya filming the whole thing. Suddenly, for the first time ever since his wife's disappearance, Gabriel appears in public, walking on the runway and hugging his son in front of everyone.

When the fashion show is over, Gabriel approaches Audrey and apologizes for the misunderstanding, saying that he fired the person responsible and knows that only the front row is befitting for her. Audrey accepts the apology and then notices Marinette's hat. She asks Marinette if she created it, and with encouragement from Adrien, she admits this. Audrey is very impressed with it and even offers her the chance to go with her to New York City and become a famous fashion designer. Marinette's friends and family are happy for her, but Marinette is unsure what to think of this.

Chloé, however, is furious and angrily asks her mother why, out of all people, she would take Marinette to New York City instead of her own daughter. Audrey says that it's because Marinette is exceptional. Chloé retorts that she's exceptional, too, but Audrey says that the only thing exceptional about her is her mother. Hurt by this comment and wanting to prove her mother wrong, Chloé reveals that she has the Bee Miraculous in her possession and transforms into Queen Bee in front of everyone, including the press. She jumps onto a high structure and announces to everyone that she is Paris's new hero and will prove that she's exceptional before taking off. An unimpressed Audrey merely dismisses this as Chloé being a showoff and leaves the building. André, Gabriel, Adrien, Nathalie, Tom, Sabine, and Marinette all do the same. Meanwhile, Wayzz and Master Fu see the news broadcast about Chloé being a superhero. Wayzz doesn't understand why Marinette gave Chloé the Bee Miraculous, but Master Fu knows that's not the case and has confidence that she will set things right.

Queen Bee waits at the top of a Ferris wheel for someone to save but sees nothing. However, after noticing the subway station, she gets an idea. She calls Nadja Chamack and says that she should get to the subway station since she will be there to help save the passengers of a speeding train.

Inside the subway, Tom and Sabine express their excitement over moving to New York City to help Marinette live out her dream. Marinette talks to Tikki about this, saying that it's her dream come true. Tikki, however, reminds Marinette that she wouldn't be able to go to New York City with her. Suddenly, Queen Bee arrives on the subway and uses her Venom power to paralyze the subway driver, causing the train to go incredibly fast. She announces to everyone onboard that she will save them but soon finds that she cannot stop the subway by herself.

Gabriel enters his lair and reactivates Nooroo. He reveals to his kwami that he has an opportunity to akumatize someone with a Miraculous and transforms into Hawk Moth. Meanwhile, Adrien goes into his room and transforms into Cat Noir, hurrying to the subways and getting there just as the press does. Marinette also transforms into Ladybug and joins him. The duo manages to save Queen Bee and the passengers onboard. Ladybug then notices that the subway driver was paralyzed and confronts Queen Bee on this in front of the press. She scolds her for selfishly using her powers. Audrey even appears through a tablet and dismisses her daughter as irresponsible. Ladybug angrily demands the Bee Miraculous back, but Queen Bee refuses. Cat Noir is surprised when he learns that Ladybug lost a Miraculous, but Ladybug reminds him that he did the same and left her to fight Style Queen on her own. While they are arguing, Queen Bee sneaks off. Ladybug and Cat Noir soon notice and, assuming that she went home, head to Le Grand Paris. The press also follows.

Hawk Moth senses Queen Bee's sadness over being ignored by her mother and failing as a superhero, so he sends an akuma after her. It infects her Miraculous, and Hawk Moth offers her the power to prove that she is exceptional in exchange for Ladybug's and Cat Noir's Miraculouses. Queen Bee accepts the deal and is transformed into Queen Wasp.

Ladybug and Cat Noir soon reach the balcony of Chloé's room, but she's nowhere to be seen. They decide to go to the lobby of the hotel only to find everyone paralyzed by stings. The duo is confused by this since Miraculous powers can only be used once. They then turn to find Queen Wasp surrounded by an army of paralytic wasps. She sends them to attack the superhero duo, who runs out of the hotel and runs over rooftops, trying to escape from the wasps. They succeed when they jump into the Seine River, as wasps don't like water. Once back on land, Ladybug uses her Lucky Charm and receives a snorkel. Cat Noir jokes that at least they won't drown, which gives Ladybug an idea.

Traveling through Paris under trash cans, Ladybug and Cat Noir arrive at the roof of Le Grand Paris where Queen Wasp had been waiting for them. Using the trash cans, Ladybug and Cat Noir swipe away the wasps and jump over Queen Wasp. While she is trying to shake Cat Noir off, Ladybug puts the snorkel on Queen Wasp and then pushes all three of them into the Seine River where the wasps can't follow. While Ladybug keeps Queen Wasp distracted, Cat Noir calls upon Cataclysm and touches the Bee Miraculous, freeing the akuma. Queen Wasp briefly turns back into Queen Bee and then back into her civilian form. Ladybug and Cat Noir take Chloé and jump out of the water in time for Ladybug to purify the akuma and use Miraculous Ladybug to return everything back to normal, including the Bee Miraculous.

The press arrives once again, in time for Ladybug and Cat Noir to try to convince Chloé to return the Bee Miraculous. However, Chloé begs for a second chance. When asked by Nadja, Audrey reaffirms her earlier comment about Chloé not being exceptional, saddening her. Cat Noir understands that Chloé's actions were out of a desire to impress her mother. Ladybug adds that even superheroes can make mistakes, which she did by losing the Bee Miraculous, and encourages Chloé to not make the mistake of not returning it. Chloé gives back the Bee Miraculous and apologizes to Ladybug and Cat Noir.

Audrey impatiently waits for Marinette at her helicopter. When she arrives, Audrey prepares for the two of them to take off. However, Marinette says that she won't be going to New York City with her because she has a lot of things she still needs to do in Paris. Audrey insists that Marinette is making a mistake, but she reminds Audrey that a huge part of her life is also in Paris and reveals Chloé behind her, all packed and ready to go with her mother to New York City. Chloé asks her mother why she doesn't love her, to which Audrey hesitantly replies that she does. Marinette tells Audrey that Chloé is exceptional -- exceptionally mean. She lists all of Chloé's worst qualities, angering both her and Audrey but also making the two realize that they have a lot in common. When Marinette leaves, Audrey asks Chloé if she is really as bad as Marinette said, to which Chloé says that her only friend in school is Sabrina, and she enjoys giving her butler a hard time. Audrey takes back her earlier comment about Chloé not being exceptional, embraces her, and decides to stay in Paris with her.

Gabriel tells Emilie that Ladybug and Cat Noir made a mistake and that there will be others, but one day they'll be together again. Once he goes back to his atelier, he is confronted by Nathalie, who reminds him of his promise earlier to stop being Hawk Moth. Gabriel tells her that he can't give up, as he misses Emilie too much. Nathalie understands and exits the room.

While playing video games with Alya and Tom, the latter asks Marinette if she's sure she won't regret not going to New York City. Marinette insists that she's sure, as Paris is her city where all her loved ones and best friends are. Marinette and Alya hug, and Marinette winks at Tikki as the end card appears.