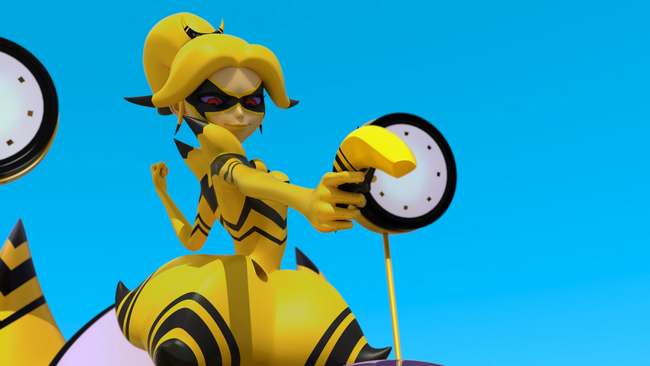 Chloe is akumatized into Queen Banana; Ladybug decides to entrust a Miraculous to help her stop a supervillain.[4]

The scene cuts to Nadja Chamack and Clara Contard reporting on the movie in the Art classroom. Students in Miss Bustier's class are working on props and the script for the movie. Zoé then practices some of her lines. Chloé sees this on television and throws a banana peel at the screen. She gets angry, but Sabrina offers her a banana. She peels the banana, then storms off to meet the crew. In the classroom, Mylène and Zoe are continuing to practice as Chloé bursts in and yells at Zoé. Chloé demands if the film makes her sister the star then it should be her that gets role and threatens Zoé that she will send her back to New York. Marinette stands up for Zoé, which makes Chloé more angrier and she storms off with her dad, promising that he will have everything prepared for the film.

When film's cast and crew go to Bob Roth's office, they are shocked to see Chloé sitting in Bob's chair. Marinette begins to question her but Bob Roth explains that Chloé will be taking the part in the film as the major role. Marinette tries to have it work out but Chloé threatens her to have her sister go back to New York which makes Marinette even more angry, but Zoé has her calm down, stating that it isn't a big deal that she can have another role that is off-screen. Chloé seems pleased with herself and Bob Roth kicks them out of his office, leaving Marinette frustrated over how Chloé is taking the film in her own hands.

The next day, the class starts preparing to film. Behind the scenes, André reminisces of a film that he did in his early days of directing, but Chloé asks him to be quiet since he was irritating her, and complains about Marinette's costume designing, but Marinette herself responds back with a snarky comment. When they are about to film, Nino asks Chloé to come on the scene, but she refuses since she despises the film's script. She demands to play the main character, and has the script changed multiple times, bringing nothing but misery and annoyance among her crew mates. This includes changing her role to be the heroine, Queen Banana, adding a banana-themed vehicle, saving Adrien, and getting a giant yellow gorilla that throws exploding bananas as the main antagonist. Chloé is once more upset when the class can only get a prop gorilla instead of a real one, which doesn't exist. Fed up with the complaints, Chloé heads home early and expects the class have the entire script fixed tomorrow. Marinette refuses to let Chloé take advantage of their film, and with a motivating speech, she persuades the class to film the movie with their original script.

The next morning, Chloé arrives in the park, but no one was there, only the clean-up crew was there. Chloé asks where are everyone, which the man states that the class had already finished filming the entire movie yesterday evening and is currently screening the final product in the movie theater. Chloé quickly rushes to the theater and finds the class had already finished filming without her. The film stars Zoé as the main heroine and Mylène as the heroine's sister and main antagonist. The two characters face off in a sword fight, while everyone is in an enchanted slumber. Zoè manages to defeat Mylène and claims to still love her, despite her sister hating her as they share a hug, while the others applaud in joy. Despite everyone adoring the completed short film, Chloé is furious with everyone. Adrien walks over to Chloé with tablet on his hands and his father on the tablet. Gabriel Agreste, who approved of the original film and decided to personally fund that version himself, instead of her version which had previously depended on a grant from the city (which was why she could force her influence on it). She then storms out of the theater, incredibly upset.

Little did they know, it was all part of Gabriel's plan to make Chloé upset in order to akumatize her. Gabriel then transforms into Shadow Moth and sends off an akuma and amok. Meanwhile, Chloé, looking very mad, is leaving the building, when Adrien catches up with her and asks her to apologize to the class. Chloé vehemently refuses, and when Adrien attempts to continue reasoning with her, she ends her long-lasting friendship with him. Chloé becomes even angrier and returns to her vehicle sobbing. The akuma and amok enter through a small opening in the car window, akumatizing and amokizing her. Shadow Moth transforms Chloé into Queen Banana in exchange for Ladybug and Cat Noir's Miraculous. A sentimonster is also created: a giant yellow gorilla that throws exploding bananas. Several people are turned into bananas thanks to Queen Banana's rampage; Adrien escapes and Marinette also flees, but pulls Zoé with her to safety. Marinette advices Zoé to stay put on the stairway while she leaves to transform into Ladybug.

Queen Banana and her sentimonster, Banana Boom-Boom, continue to rampage throughout Paris, turning everyone into bananas and hunting down Zoé. Cat Noir arrives first and manages to hold off the enemies until Ladybug arrives. The pair return to fight and fend off oncoming bananas. Ladybug then uses her Lucky Charm and summons a motorcycle with very few gear in its trunk, including two helmets and a squirt bottle of glue. Zoé steps out of hiding to speak to her sister, causing Ladybug to realize she needs her to pull off her plan. Queen Banana is about to turn Zoé into a banana, when Ladybug rescues her in time and the pair escape while Cat Noir fends them off. He uses his Cataclysm to attack Queen Banana, but it hits Banana Boom-Boom instead. The now infuriated sentimonster chases Cat Noir while Queen Banana follows Ladybug and Zoé. They managed to take cover in a subway station while Queen Banana waits outside. Ladybug lends the Bee Miraculous to Zoé, who uses it to transform into the superheroine Vesperia. Ladybug leaves the station and distracts Queen Banana while Vesperia helps Cat Noir defeat Banana Boom-Boom by immobilizing it with Venom. The two introduce themselves to each other and quickly recharged their Kwamis before returning to the fight.

Meanwhile, Ladybug is chased down by Queen Banana until the enemy causes her to trip. Cat Noir arrives in time to uses his Cataclysm to destroy her vehicle. Queen Banana threatens to shoot Ladybug unless he hands over their Miraculous. This is only short lived as Vesperia arrives on the scene, which leaves Queen Banana furious learning that there is a new Bee Miraculous holder. Vesperia taunts Queen Banana while Ladybug squeezes the glue from her Lucky Charm into Queen Banana's pocket. Queen Banana turns Vesperia into a banana and places her weapon into her pocket, only to find it stuck to the glue. Helpless, Queen Banana tries to run away, but Ladybug uses her yo-yo to trip her and Cat Noir snatches her akumatized and amokized hair clip for Ladybug to destroy. She then uses her yo-yo to purify the butterfly and feather, releases them, and uses Miraculous Ladybug to fix all the damage. Chloé returns to normal, but she is still angered with Ladybug and Vesperia. Ladybug advices Chloé to learn to control her anger and uses her yo-yo to create a Magical Charm. Chloé quickly denies Ladybug's help and runs off.

Back in his lair, Shadow Moth, rather than being upset by another defeat, says that the script will soon be rewritten, and he still senses Chloé's infinite anger and summons another akuma to go after her again.

Meanwhile, Ladybug picks up Magical Charm and Cat Noir says that they must recharge their Kwamis before Shadow Moth re-akumatizes Chloé. Ladybug sadly says that she wanted Chloé to wear this, so she can escape any other akumatizations. With no way of convincing Chloé to take the Magical Charm, Zoé has a plan.

Back at the theater, Chloé demands for a reshoot. Zoé steps in, and when Chloé attempts to threaten her again, she claims she's had enough playing the supporting role for the good of their family. Chloé screams at her father to hurt her sister, but he confidently refuses, saying that she can asks him for a new cellphone or paint the limousine pink, but she can't ask him to hurt Zoé. Knowing Chloé still despises her, Zoé tells her that she will always love her even though she hates her, reminiscent of the film. She gives Chloé the Magical Charm, claiming it to be a necklace from their mother. Chloé takes the charm and puts it on, preventing the akuma from reaching her and leaving Shadow Moth in shock. Chloé then storms out of the theater, promising to get her revenge on Zoé someday. Marinette is proud of Zoé's quick thinking and hopes Chloé can learn to become a better person someday, before the end card appears.