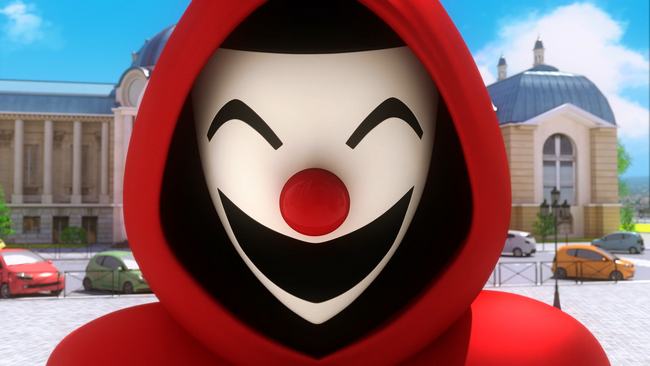 A famous comedian gets akumatized into Psycomedian; able to impose any emotions on anyone, he wants to wipe the smiles off everyone's faces starting with Ladybug and Cat Noir.

The episode starts at the school's cafeteria, where Marinette reflects on her relationship evolution with Adrien with her friends. It starts with a flashback from "The Bubbler" when Marinette gives her gift to Adrien on his birthday, then from "Gigantitan" when she declines riding home with Adrien, followed by "The Puppeteer 2" where she rides the car home with Adrien and they agree to not play pranks on each other, when he reveals that the girl he is in love with does not appreciate them either.

Marinette decides that Adrien has to see her in a new light so they can get together, but Alya tells her that her quirkiness is what makes her attractive. Meanwhile, Nino and Adrien are watching on of Harry Clown's comedy sketches on a bench. Adrien looks up and sees Marinette gesticulating, which makes him laugh. Nino thinks Adrien was laughing at the comedy sketch and decides to show him more, and Marinette has an idea to make Adrien like her.

Once Adrien leaves in the car, Marinette interrogates Nino, who explains that they were watching Harry Clown's sketches. She remembers that he visits the bakery every day at that time and runs home, where she finds Harry buying a baguette. She tells him that she would like her and Adrien to attend his final performance in Paris. Harry, understanding that she is "a little bit crazy" about Adrien, agrees to talk to Gabriel, whom is revealed to have designed the French fry costume for Harry's first act.

At the Agreste's, Gabriel questions Harry, who explains that he would like to offer Adrien a role in his movie. Gabriel grows more sketical while Harry describes the emotional depth of the movie, using his gimmick from time to time and making a comedy out of Hawk Moth. Gabriel eventually agrees, with the condition that Harry erases all traces of the French fry costume. Harry leaves the mansion enthusiastically, and Gabriel comments to himself that no one will take Harry seriously. Back at Marinette's, Harry and Marinette jump around the kitchen, celebrating the fact that Gabriel accepted. Marinette plans her behavior but realizes that she doesn't know any good jokes. Harry decides to help her.

In the dressing room, Harry enthusiastically shows his drawings to Bob, explaining the key concepts of his movie. Bob thinks it is hilarious, and Harry tries to appeal to him, explaining that it is actually a serious superhero movie he made to let people feel emotions other than laughter. He explains that when he was a kid, he always wanted to be a superhero. Bob Roth ridicules him and mercilessly tears up the drawings, informing Harry that the performance was about to start.

Shadow Moth senses Harry's sadness and sends out an akuma. Harry leaves the dressing room and sees Marinette crying in a corner. She says that it was a total disaster, and that Adrien didn't laugh once. The audience's ovations are heard, and Harry heads to the stage apathetically. The akuma flies into his belt bag. Harry gladly takes the opportunity Shadow Moth offers him, and when the curtains open, he is already transformed into Psycomedian. Adrien escapes while the audience laughs, and Psycomedian uses his power to make the audience furious and start fighting each other. Adrien transforms into Cat Noir. Meanwhile, Bob is having a phone call. Psycomedian arrives, and Bob runs out of the building. Marinette hides behind the dressing room and transforms into Ladybug.

Psycomedian follows Bob and is in turn followed by an angry mob of spectators. He uses his power again, making them first laugh, and then cry. Ladybug and Cat Noir face him. He tries to use his power on them, but they cover their eyes. He honks at some people, who angrily chase Ladybug and Cat Noir. The heroes seek shelter, and Ladybug uses her Lucky Charm. She gets a makeup case, which they use to draw fake eyes on her eyelids.

She comes out of hiding, and Psycomedian spots her. She pretends to cry when he honks at her, and, guided by Cat Noir, she snatches his red nose when he comes close. Breaking the nose doesn't work, and Psycomedian takes advantage of the momentum to use his power on Ladybug. He grabs another nose from his bag and puts it on. Once he honks it, Ladybug attacks him aggressively, with Cat Noir pointing out that making her angry was not a good idea. He protects civilian from incoming objects that Ladybug was violently throwing and soon gets attacked by her. Psycomedian tries to manipulate Cat Noir into being affected by his power, but he grabs Ladybug and leaps away. Shadow Moth tells Psycomedian to follow them, but the latter decides that, should they want to defeat him, they would have to come and find him anyway.

Cat Noir patiently tries to calm Ladybug down, but she yells at him and kicks an ad with Adrien's picture. Seeing that it doesn't work, he maneuvers his stick to tie Ladybug with her own yo-yo and carries her to the sewers. Meanwhile, Psycomedian finds Bob Roth at the Grand Paris hotel and taunts him, trying to get him to admit that Psycomedian is capable of making people cry, too. He uses his power on him, making him first laugh hysterically, and then cry uncontrollably.

Ladybug and Cat Noir detransform behind walls, and Marinette continues to yell at Adrien and Tikki. He hopes that she will calm down once she transforms again, which proves not to be the case as he had a furious Ladybug wrapped up in a cloth. Ignoring her mean remarks, Cat Noir strategizes their battle. He carefully unwraps Ladybug to let her use her Lucky Charm, a helmet, which she immediately smashes with her foot. Cat Noir questions her action, pointing out that for once the solution was obvious. Still yelling, Ladybug tells him to give his "ridiculous belt", which mildly upsets him. She swings away with it, grabbing a lady's helmet, and Cat Noir follows her, apologizing to the lady and promising to return the helmet soon.

Ladybug confronts Psycomedian with her eyes tied with the belt while Bob Roth crawls away, still crying. After Psycomedian taunts her, for once in a manner that Cat Noir finds funny, she faces him in a hand-to-hand combat. While Cat Noir sneaks into the hotel and uses nail polish to paint the helmet and its visor. Psycomedian tries to distract him, but Ladybug encourages him to continue albeit through mean remarks. He calmly finishes colouring the helmet and places it over Psycomedian's head. Ladybug ties him up with her yo-yo, and Cat Noir cataclysms the belt bag, releasing the akuma. Ladybug, still angry, purifies it and uses her Miraculous Ladybug, turning everyone back to normal. Cat Noir checks on her, and she replies that she is feeling better. Ladybug gives Harry a Magical Charm and gives him some encouraging words. Inspired, Harry compromises with Bob Roth, who is still skeptical, and Cat Noir suggest finding a new producer.

At night, back at the Grand Palas, Marinette sits down next to Adrien. She apologizes, and Adrien admits that earlier that day, he was laughing at Marinette, not Harry, and that no one makes him laugh as much as Marinette. She is delighted, and the curtains open. A shadow a Harry appears with a clown nose from the stage lights and the show begins.