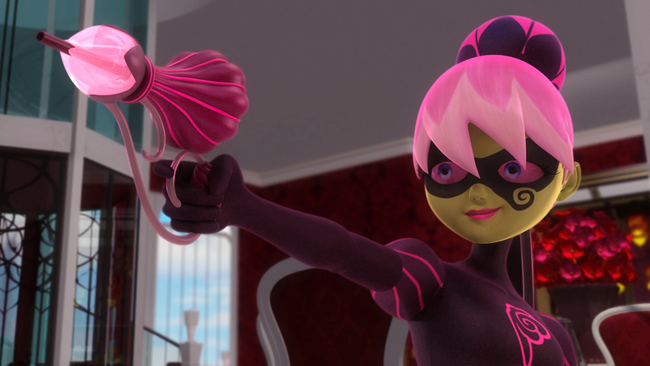 Marinette can't transform into Ladybug when Tikki has gone missing. But when classmate Rose is akumatized into a villain whose perfume lets her control Cat Noir and a visiting prince, Marinette need to locate Tikki and stop that menacing perfume princess.[8]

The episode begins with the TVi news report about Ladybug and Cat Noir, who have saved Paris once again by defeating a kid named Jean Duparc, who was akumatized into the Magician of Misfortune and wanted to make the Eiffel Tower disappear in a puff of smoke. After Ladybug transforms back into her civilian form, Marinette notices that Tikki is sick. Tikki asks her if she could take her to a doctor, but Marinette thinks that it isn’t a good idea to find a doctor for a kwami. Tikki claims that she knows a healer that can help her, but Marinette is afraid that he might get suspicious. Marinette then remembers that she’s late for school, so she tells Tikki that she’ll take her to the healer once the class is over.

At Ms. Mendeleiev's classroom, Rose watches a news report on her phone about Prince Ali, crowned prince of the Achu Kingdom, who is having an official visit to Paris to organize a toy drive for the kids in the city’s hospital. Smitten, Rose decides to write him a letter to show how much she loves and respects him. Marinette arrives to class just when Rose is about to write the letter. Rose sprays her letter with her perfume, and is noticed by the professor; annoyed that Rose didn’t pay attention in class, Ms Mendeleiev makes her go to Mr. Damocles' office. Once Rose is gone, Ms Mendeleiev demonstrates to the class how Rose’s perfume is flammable.

When class is over, Adrien finally shows up outside of school. Alya suggests that maybe Marinette should give him her notes so he can be up to date on what they’re working on in class. However, Marinette remembers the promise she made to Tikki, so she tries to think of an excuse. Alya, though, doesn't believe her and forces her to walk up to Adrien. Unfortunately, Marinette trips on a backpack, causing her to launch Tikki into the air while Adrien manages to catch Marinette before she falls.

When he and Nino leave, Marinette opens her purse to see if Tikki is still in there. When she notices that Tikki is missing, she gasps and starts to look around to see where her kwami is. Next to her, Sabrina and Chloé are on their way to the latter's limousine when they stumble upon Tikki on the ground. Chloé mistakes her for a toy and decides to give “it” to Prince Ali during his visit to Le Grand Paris later that day. Before Chloé steps inside the limo, Rose arrives to ask her if she could deliver her letter to the prince. However, she makes fun of her and her letter and tears it to pieces. While the heartbroken Rose tries to gather the pieces of her letter, Marinette notices Tikki in Chloé’s hand. Panicked, Marinette tries to tell Chloé that the “toy” actually belongs to her, but Chloé refuses to give "it" back, and the limo drives away from the school.

At the same time, Rose is heartbroken that she doesn't have a letter to give to Prince Ali, so she goes to sit on a bench near the Seine to write a second letter to him, crying. Hawk Moth then sends an akuma after Rose, and it lands on her perfume bottle. Rose sees her chance to be with the prince and agrees, so she is akumatized into Princess Fragrance.

Outside of the Le Grand Paris, Marinette tries to get past the hotel doorman so she could enter the hotel to get Tikki back, claiming that she is Chloé's friend. He doesn’t let her in, though, due to the fact that Chloé doesn’t have any friends. As Marinette walks away, she finds a motorcycle helmet, cape, and an old pizza box in the trash. Pretending to be a pizza delivery girl, she manages to get past the doorman and into the hotel. Taking the elevator to the floor of the Imperial suite, Marinette spots Chloé holding Tikki near the second elevator of the floor. When the elevator doors open and Chloé steps in, Marinette quickly runs to tell her about the “toy” she’s holding. But Chloé, disgusted by the prospect of having pizza, rapidly pushes one of the buttons when she sees her, so the doors close. So, Marinette has to run up the stairwell to follow her upstairs.

Meanwhile, the TVi news report is currently broadcasting Prince Ali being greeted by the Mayor of Paris on the top floor of the Le Grand Paris. The Mayor explains to the prince that he has organized some fireworks on the Seine in front of the hotel when he arrives and that it’ll be launched from a boat. Then, Chloé arrives, and the Mayor introduces her to the prince. After a handshake, Chloé gives him the “toy” she found earlier outside of school. While the paparazzi are taking photos of Prince Ali, Marinette sneaks behind them and spies on them. The prince puts Tikki into his front jacket pocket. While Nadja Chamack is interviewing the prince, no one notices Princess Fragrance coming out from the service elevator. She uses her perfume gun and fires a green spray onto Chloé, releasing a disgusting smell.

While Prince Ali, his chaperone, the Mayor, and Nadja’s backs are turned to Chloé, they hear a blast. They turn and see the mind-controlled paparazzi bowing down for Princess Fragrance. The akumatized villain introduces herself to the prince and says that he’ll belong to her once she sprays him from her perfume gun. Now without Tikki to transform into Ladybug, Marinette has to save both Prince Ali and the kwami from the akumatized villain. She activates a button from a synthesizer to launch the confetti to prevent Princess Fragrance from shooting the Prince. Adrien is surprised when he watches the live broadcast of the fiasco in his room. He tells Plagg that the prince is currently in danger, and he then transforms into Cat Noir.

Marinette follows Prince Ali, his chaperone, the Mayor, and Chloé when they escape into the stairwell to run from Princess Fragrance. They hide inside a hotel room, in which the Mayor claims that they’ll be safe from her by the reinforced door. After Chloé feels annoyed about both Prince Ali and his chaperone being disgusted by her smell, she noticed that Princess Fragrance had sprayed perfume under the doorway. Luckily, Marinette vacuums the spray before it brainwashes the prince. But Princess Fragrance points her gun downwards and continually shoots perfume to propels herself, and she lands on the vacuum cord, unplugging it. But before she sprays Marinette, the Mayor gets out of the room and runs off, along with Prince Ali, his chaperone, and Chloé. Princess Fragrance then spins around to spray her perfume around herself to create a fog.

Fortunately, Marinette escapes by the brainwashed waiter, but the mayor doesn’t escape from the fog. He gets caught in the fog after he opens the stairwell door for the prince, his chaperone, and Chloé. Once Marinette gets into the kitchen, she peeks through the door and sees that the Mayor has been brainwashed too. Princess Fragrance arrives by elevator and is about to spray Prince Ali, but Cat Noir barges in just in time. After a quick battle between Cat Noir and Princess Fragrance, Cat Noir helps the prince, his chaperone, and Chloé evacuate by sliding down his staff outside the hotel. Once they get inside Prince Ali’s chaperone’s car, they drive away. Princess Fragrance uses her perfume gun like a rocket to follow the car. Marinette follows them.

After opening the windows to get rid of the smell from Chloé, Princess Fragrance arrives on top of the car roof. But before the chaperone can close all the windows, she sprays everyone in the car. After riding a scooter to follow the car, Marinette rushes over to see if Tikki is inside. Luckily, Tikki had escaped from Prince Ali’s pocket and onto the car’s floor. Marinette apologizes to Tikki for not taking her to the healer and runs off to find him. After a visit to Wang Fu's massage shop, Tikki informs Marinette about where Princess Fragrance and the others are. So, Marinette transforms into Ladybug and goes to the Pont des Arts.

At the Pont des Arts, Princess Fragrance is thrilled to wed the mind-controlled Prince Ali. But before she can place a love lock on the bridge Ladybug uses her yo-yo to knock it into the river. Under Hawk Moth’s command, Princess Fragrance sends her mind-controlled servants, including Cat Noir, to retrieve Ladybug’s earrings; she also takes Prince Ali away from the fight. On the Le Grand Paris roof, Princess Fragrance decides to make Paris their kingdom for them to rule and starts spraying the sky. When Ladybug realizes that everyone in Paris, including her, is going to become Princess Fragrance’s slaves, she remembers something from her chemistry class earlier: Ms Mendeleiev's warning about the flammability of Rose's perfume; and she happens to see the boat the Mayor mentioned earlier that’s full of fireworks.

By tricking Cat Noir into using his staff to push her into the river, Ladybug lands on top of the boat. She pulls the staff to launch him onto the boat with her. Cat Noir uses his Cataclysm to stop Ladybug from escaping. He’s about to strike her, but she trips him, and he ends up using it on the fireworks' control panel, releasing the fireworks into the sky. After pulling Cat Noir’s tail and dropping him into the river, Ladybug uses her yo-yo to escape from the boat.

The fireworks explode into Princess Fragrance’s fog of perfume, causing it to vanish into thin air. Upset that her plan failed, Princess Fragrance suggests that she and the Prince should run away from Paris. But Ladybug interrupts her, making the akumatized villain burst into anger and decide to destroy her for ruining her dream. Ladybug uses Lucky Charm, and a balloon appears. She grabs a straw and puts the balloon through it. Before Princess Fragrance can spray her, Ladybug tosses the straw with the balloon in the mouth of the perfume gun; causing the balloon to inflate. Ladybug then uses her yo-yo to grab the perfume gun and breaks it, revealing the akuma. She catches the akuma and purifies it. Ladybug then tosses the balloon and cleanses the city, returning everything, including Rose, back to normal.

After Rose detransforms, she is delighted to see Prince Ali in front of her. Ladybug decides to leave the prince alone with his biggest fan. Rose confesses to Prince Ali that he’s one of the kindest people she ever met. But then Chloé arrives, interrupting them and shoving Rose out of the way, declaring that she is happy that the Prince is alright. The Prince rejects Chloé's offer for starting where they left off before the villain’s attack because he has to go to the kids’ hospital with his new friend, Rose. Chloé is left infuriated, while Rose and Prince Ali go to watch the fireworks at the Pont des Arts.