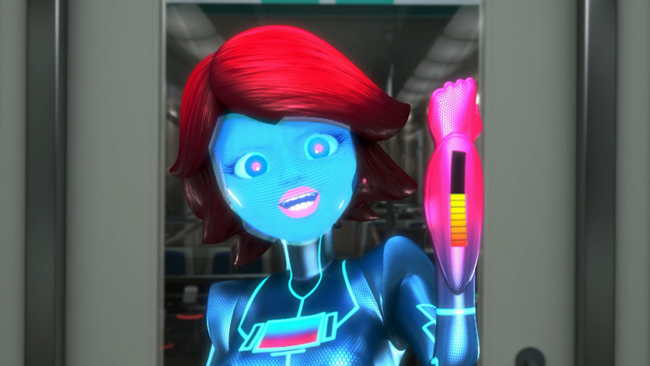 During an exclusive interview, a reporter trying to trap Ladybug and Cat Noir into confessing feelings for each other is akumatized by Hawk Moth.[7]

Nadja Chamack is akumatized into Prime Queen. Armed with her smartwatch, she wants to force Ladybug and Cat Noir to admit that they’re in love on live TV to make the ratings skyrocket. Our heroes can't let her steal the show![8]

On Marinette's computer, an advertisement for the new television series Face to Face plays, in which Nadja Chamack promises the viewers an exclusive interview with Ladybug and Cat Noir, in which "sizzling hot information" about the two heroes will be revealed. Tikki is startled by the idea of information about Ladybug and Cat Noir being revealed and tells Marinette she is a superhero, not a star, although Marinette tells her not to be, as she and Cat took the chance to be interviewed in order to tell the citizens of Paris that they will always be there to protect them. Marinette then realizes that the interview had been rescheduled to that night, in which she also has to babysit Manon. Nadja then arrives and drops off her daughter. Afterwards, Marinette calls Alya.

At the TV 5 studio, Nadja is pressured by her boss Arlette, who tells Nadja that she'd better keep her promise of attracting the largest amount of viewers in the entire year if she wants to keep her show on Prime Time in the future. At that moment, Cat Noir arrives, and jokingly tells Nadja that he secretly loves chouquettes. Upon hearing this "secret", Arlette continues to pressure Nadja with threats of canceling her show if her "sizzling hot info" is inadequate.

Back at the Patisserie, Alya is playing with Manon, believing that she, Manon, and Marinette are going to watch Face to Face together. However, Marinette creates the excuse that she needs to talk to her parents, and that it could take a really long time. In the stairwell, Marinette debates whether or not she should leave Alya to take care of Manon or appear on Face to Face. Tikki tells Marinette that the choice is hers, and she decides to appear on the show.

As Face to Face is about to start and Arlette begins to lose confidence in Nadja, Ladybug burst into the studio and sits down next to Cat Noir. Arlette tells Nadja that it is now her job to boost the ratings, symbolized by a meter on her watch that turns more green based on the number of viewers watching. The show begins, and Nadja starts to interview Ladybug and Cat Noir. She brings up a viewer call screen, with Chloé Bourgeois on the receiving end. Chloé ends up having no real questions to ask, causing the ratings to drop and forcing Nadja to cut her transmission short. Alya and Manon then call, and Alya asks Ladybug for an interview on the Ladyblog. Annoyed, Arlette pressures Nadja into skipping to her big scoop. Nadja then questions Ladybug and Cat Noir's relationship, stating that many believe them to be dating as well as fighting supervillains together.

While Ladybug and Cat Noir deny this (although Cat Noir suggests that they aren't a couple, yet), Nadja brings up an image of the two kissing on Valentines Day. Cat Noir has no memory of this happening, and Ladybug states that she kissed him in order to save his life, not out of romantic feelings. Delighted with the rising viewers, Nadja continues to show "romantic" images of Ladybug and Cat Noir together. Frustrated with Nadja and embarrassed, Ladybug angrily leaves the studio and drags Cat Noir along. With Ladybug and Cat Noir gone, Arlette cancels Face to Face, leaving Nadja miserable. Sensing Nadja's distress, Hawk Moth sends an akuma after her, which lands inside her watch, transforming her into Prime Queen.

Ladybug is still annoyed with Nadja and her prying questions. Cat Noir tells her that is the price of stardom, but Ladybug reminds him that they’re superheroes, not stars. She begins to leave but Cat Noir chases after her and says that he wasn’t planning on getting home so early and invites her for some ice cream.

Alya and Manon are scrolling through channels on TV but don’t find anything interesting. Alya is upset that the show ended so quickly and Manon tells her that she wants to see her mother. However, as she says this, she falls asleep. Alya puts her on Marinette’s bed. Just then, Prime Queen appears on all television sets in Paris and announces her plans to force Ladybug and Cat Noir to admit their love for one another. She proceeds to go through Chloé’s television, ties her up, kidnaps her, and takes her to a subway train. After frightening everyone on board out of the train, Prime Queen speeds up the train and tells Ladybug and Cat Noir that they must come through the screens to save Chloé. Ladybug is hesitant to since it may be a trap, but Cat Noir says that they don’t have a choice, so they both jump through the large television screen Prime Queen left open.

Once arriving there, Chloé complains to the duo about them taking too long and her jacket, which has gum stuck to it. Ladybug figures out that Prime Queen’s akuma is in her watch and attempts to catch her, but she easily gets away. She tells the two superheroes that if they want her to stop the train, they must admit that they’re in love, but Ladybug refuses. Cat Noir offers to use his Cataclysm; however, Ladybug tells him to save it for an emergency. She decides to play along with Prime Queen and “admits” to her that she and Cat Noir are dating, which gets her to stop the train. Prime Queen orders the duo to give her their Miraculouses in order to prove that they’re in love. Cat Noir comes up with an idea to prove to Prime Queen that he and Ladybug have feelings for one another by having them kiss, although Ladybug refuses to do so. Frustrated, Prime Queen kidnaps Alya and takes her to the Louvre, where she ties her up and traps her in a mummy coffin. She warns Ladybug and Cat Noir that they must give her their Miraculous or else she’ll mummify Alya. Ladybug and Cat Noir find a screen affected by Prime Queen and jump through it. Chloé is left there still tied up.

Ladybug and Cat Noir are surprised to see that they aren’t at the Louvre but rather in Le Grand Paris' freezer. Cat Noir once again offers to use his Cataclysm, but Ladybug says there’s no point since they’re probably far from the Louvre and by the time they get there, it’ll be too late to save Alya. Cat Noir tries once more to kiss Ladybug, but she still rejects his advances. Prime Queen once again tells the duo that they must give her their Miraculouses, and she threatens to drop Alya through a television screen underwater if they don’t. Ladybug uses Lucky Charm and receives a roll of tape. She comes up with a plan to tape a pizza box over the television screen so that they’re covered and then tricks Prime Queen into going through it by saying she and Cat Noir are about to take off their masks. Once Prime Queen arrives, Cat Noir destroys the television screen with his staff so that Prime Queen is stuck with them. Ladybug pins Prime Queen down and Cat Noir breaks her watch and uses Cataclysm on the freezer door. Ladybug captures the akuma, returning Nadja and everything else back to normal. Hawk Moth is angry that Prime Queen was defeated but swears that one day, he’ll be broadcasting the end of Ladybug and Cat Noir.

Marinette comes back upstairs to her room and apologizes to Alya for being gone for so long. Alya tells Marinette about being kidnapped by Prime Queen and Marinette says she’s sorry for not being there for her. Alya says it’s okay but the next time they hang out, she isn’t allowed anywhere near her parents.