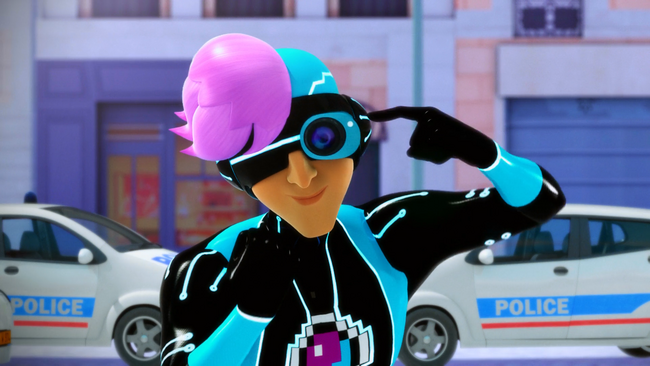 Rejected by a rock star, an angry fan becomes Pixelator, who traps Parisians in his camera's memory until Cat Noir and Ladybug halt his photo spree.[8]

Caline Bustier talks to her students about how they will be able to try some of the jobs in Le Grand Paris. As André Bourgeois looks through this list of jobs for people, Miss Bustier finds that Marinette and Alya aren't on the list. Alya whispers to Marinette that she thinks who knows who helped the mayor pick out the jobs while staring at Chloé. Marinette is upset that Chloé gets to spend the whole day with Adrien and declares that today will be the worst day ever. Chloé then calls out for her father and gives him a sheet with the jobs for Alya and Marinette. Alya ends up having to sort trash in the principle dumpster.

Before Mr. Bourgeois gets the chance to tell Marinette her job, Jagged Stone bursts in with his assistant, Penny Rolling, and his pet crocodile, Fang, asking for a luxury suite room. At first, Mr. Bourgeois doesn't want to let Jagged inside, but after Chloé tells her dad who he is, André welcomes him into his hotel. Meanwhile, a fan of Jagged sneaks into the hotel and hides behind a desk. The fan, revealed to be Vincent Aza, tries to sneak a few photos of Jagged but is caught by Fang. Vincent asks Jagged for a few photos since they are friends, but Jagged tells Vincent they aren't friends. Penny scolds him and throws him out of the hotel, warning him to stay away from Jagged and threatening to take away his camera if he ever comes near him again.

Vincent becomes frustrated by this, and as a result, he is akumatized into Pixelator by Hawk Moth.

Marinette runs out of Le Grand Paris to the Eiffel Tower and buys a pair of sunglasses. Tikki tells Marinette that the glasses she bought aren't even close to what Jagged Stone wants and she should just do the job right the first time. Before Marinette can reply, a lady passing by with her child sees Tikki inside of Marinette's bag and freaks out. As a cover, Tikki meows, pretending to be a cat.

Pixelator walks up to the hotel and tricks Kim and the doorman into letting him take their photo, only to pixelate them instead. Pixelator then enters the hotel and Chloé attempts to kick him out, stating that her father only allows the biggest celebrities to stay in his hotel, such as herself, however, Pixelator then asks to photograph her, which she allows. Adrien, realizing that Pixelator has been akumatized, attempts to push Chloé out of the way, only to be pixelated and transported into a photo with Chloé. In the photo, Adrien tries to find a way out, while Chloé tries to manipulate their time alone to "bond" with him.

When Marinette gets back to the hotel, she notes that Adrien and Chloé are missing, although Tikki reminds her that she has more important things to do. Marinette tries to give Jagged Stone the glasses, but he is busy washing Fang, so Penny takes care of it. As Marinette walks out, Pixelator walks in and pixelates Penny. Marinette notices this, and transforms into Ladybug. Just before Jagged Stone is pixelated, Ladybug saves him, but she gets her right arm pixelated in the process. Ladybug carries Jagged Stone out of the hotel to Mr. Damocles' office. She tells Jagged Stone to stay in the office while she goes to capture Pixelator's akuma.

In the photo, Chloé tries to yell for her dad, while Adrien tries to get away from Chloé in order to transform. He starts to run but is interrupted by Chloé, who screams and clings to him while pointing to a newly-pixelated Fang.

As Ladybug is inspecting Vincent's room, she finds a bunch of photos on the wall that have all of Pixelator's victims inside.

Pixelator captures multiple Parisians into photos. Nadja Chamack asks the Pixelator a few questions. Jagged Stone, who is watching, decides to go to Pixelator and give him what he wants. Ladybug eventually shows up, although, with her right hand gone, she finds it hard to fight and use her yo-yo. She then slips and is cornered against a car by Pixelator. She makes a deal with him about him freeing half the people, in exchange for a private photo shoot with Jagged Stone. He agrees, even though Hawk Moth warns him not to.

After he frees half the people, Adrien and Chloé are sent back to the lobby of the hotel. Adrien runs off and transforms into Cat Noir. As he sneaks up on Pixelator, Ladybug tries to tell him where the akuma is by stalling. But, just when he was going to take off Pixelator's glasses a civilian yells out Cat Noir's name and alerts Pixelator. Adrien then gets sent back into the pixel world, and Ladybug gets her right leg pixelated. Jagged Stone appears and agrees for Pixelator to take his photo. He can't seem to find the right pose until he gets just the right one. Just as he is about to take the photo, Ladybug uses Lucky Charm, giving her a handheld mirror.

Cat Noir uses Cataclysm to break the photos and free everyone else, including himself. He gets back to the real world, and he helps Ladybug with her Lucky Charm by using his staff to hit the mirror in front of Pixelator, just as he takes the photo. The photo beam bounces off of the mirror and shoots Pixelator, causing everything except his camera to disappear.

Before breaking the item with the akuma inside, she uses Miraculous Ladybug to get her limbs back, then she breaks the item the akuma was inhabiting and captures it. Pixelator turns back into Vincent Aza.

Later, at Le Grand Paris, Ms. Bustier thanks Mr. Bourgeois for the enterprise day. As she is finishing thanking him, Jagged Stone's assistant gives Marinette, Alya, Adrien, and Nino tickets to Jagged Stone's concert. Chloe is unhappy upon not receiving one.

At the concert. Adrien states that it is his first time at a concert and that it's awesome. Marinette agrees, and Jagged Stone dedicates a song on the piano to Ladybug.