On August 31, 2017, TFOU revealed at a press conference that he will be voicing a character based on himself in the French dubbed version of Miraculous: Tales of Ladybug & Cat Noir.[1][2]

Philippe Candeloro was born in Courbevoie, France as the youngest of four children. His father, Luigi, was a mason, and, a few years after Philippe's birth, built a family home in the Parisian suburb of Colombes.

Early in his childhood, Candeloro enjoyed swimming and elastic springboard. In 1979, at age seven, he began taking weekly ice skating lessons. During one of his first lessons, trainer André Brunet noted Candeloro's potential and invited him to increase his skating practices. At first, he participated in the village's hockey team but quickly veered into figure skating. He stole one of his first pairs of skates. His mother paid for them when the theft was discovered. 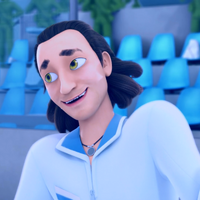 Retrieved from "https://miraculousladybug.fandom.com/wiki/Philippe_Candeloro?oldid=424966"
Community content is available under CC-BY-SA unless otherwise noted.