Mudangbeolle was a Korean woman who lived during the Imjin war.[1] She was a past Miraculous holder, wielding the Ladybug Miraculous and transforming into a ladybug-themed superhero when Tikki inhabited it.[2]

She was thin with pale skin and long black hair.

Mudangbeolle wore a jumpsuit with black waist and legs with a red top with black spots. The edges of the upper side of the suit (inspired by the hanbok) are black and white, and there are two ladybug-like ornaments at the front with a red ribbon that falls down her waist. Her hair is tied in a ponytail with a red barrette with black spots, and she has red spot-like marks on her face: two on her cheeks and one at her forehead.

If this past Ladybug Miraculous holder had the same powers as the current Ladybug, she had enhanced abilities and the superpowers Lucky Charm and Miraculous Ladybug. She also had the yo-yo for a weapon. 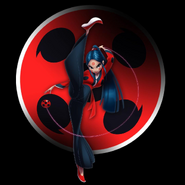