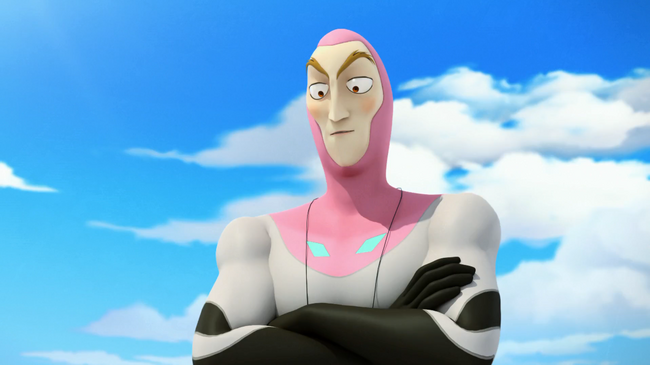 The akuma fighters try to apprehend Mr. Pigeon, a bird lover who has kidnapped all the park keepers in Paris, but Cat Noir's allergies interfere.[9]

Mr. Damocles is in Miss Bustier's classroom, telling the students about a design competition being hosted at the school. The objective of the competition is to design and create a derby hat, which will be judged by fashion designer Gabriel Agreste. The winner of the competition will have their design worn by Adrien at his next photo shoot.

Marinette flips through her design diary, searching for a derby hat, only to discover that she has never made one. Alya watches as Marinette paces the courtyard, slowly becoming tenser. She states that she has made silky ram hats, bell hats, berets, and sombreros, but never a derby hat. While worrying, Marinette develops a worst-case scenario of her tripping over the hat, knocking over Mr. Agreste, earning hate from Adrien, and losing her dream of becoming the world's best fashion designer. Marinette dramatically cries into Alya's lap before Alya cheers her up, asking to look through Marinette's sketchbook.

Setting the sketchbook down on the bench, Alya turns away from Marinette as Marinette brings her knees to her chest. Adrien, seeing the open book, glances at the pages and compliments Alya for her sketches. Alya corrects him, telling him that it was actually Marinette, who is hiding behind the bench. Adrien congratulates her on her designs, telling her that he thinks she has a good chance of winning the contest. This compliment gives Marinette the confidence she needs to make her design, and she runs off.

At the same time, Chloé and Sabrina overhear what Adrien says to Marinette. This distresses Chloé, so she resolves to have Sabrina steal designs from Marinette's sketchbook.

Hawk Moth, in his lair, wonders who is up to the task of stealing Ladybug's and Cat Noir's Miraculouses, claiming that they must be his.

Marinette sits outside at the Trocadéro with her sketchbook open on her lap. She sketches various versions of derby hats before ripping them out and crumpling them beside her. As she becomes more dejected, a man appears, moving his arms like wings and cooing to the pigeons. Xavier Ramier sits on a bench and calls the pigeons to him with a whistle. He then brings out a bag of bird food, tossing it to the pigeons.

Roger Raincomprix stalks over and yells at Xavier for feeding the pigeons, stating that, if he continues to feed them, they will crowd the park and leave their droppings everywhere. Confiscating the bird food, Roger kicks Xavier out of the park. Marinette feels sorry for him. Tikki gives her the idea to make the hat based on pigeon feathers. Inspired, Marinette hurriedly sketches the idea.

Meanwhile, Xavier sits on a bench overlooking the Seine, dejected. Hawk Moth senses Xavier's sorrow and sends an akuma to him, which enters his bird call. Hawk Moth tells Xavier that the police and park keepers should not be allowed to stop him from taking care of his pigeons and offers him the chance to take revenge on them. Xavier grins, turning into the villain, Mr. Pigeon. He takes off, flapping his arms and cooing.

At the same time, Marinette finishes her sketch. When she holds up her book to admire it in the light, Sabrina takes a picture of the sketch with her phone, handing it to Chloé. Sabrina asks Chloé when she'll design the hat, but Chloé says that her father, Mayor André Bourgeois will pay someone to make it.

Marinette returns to her house, making the hat in her room. Tikki helps her, giving Marinette an apple to replenish her energy. At 1:21 pm, Marinette freaks out, realizing she forgot to grab a feather for the hat. She and Tikki run back to the Eiffel Tower, disturbing the pigeons until Marinette grabs a feather. Elated that she has one, she skips off, bumping into officer Roger before returning home. Roger, however, goes on his merry way after Marinette apologizes and departs. A dark cloud of birds hovers over him, taking him away.

While Marinette is on the bus, she asks the driver why they can't go faster. The driver says that they have a situation and tells the people to get off the bus. Marinette sees that pigeons are causing the traffic jam, along with other problems all over Paris.

Nadja Chamack, on a nearby screen, reports on the pigeons and is then told that Mr. Pigeon will make an announcement: Paris belongs to the pigeons. Marinette runs to the subway, wasting no time before transforming into Ladybug.

Ladybug runs along Paris' rooftops until she sees hordes of pigeons flying in the sky, all in the shape of airplanes. Just then, Cat Noir appears, lounging on a rooftop. He sneezes, rolling down to Ladybug. This is due to his allergy to feathers. Cat Noir tells Ladybug that the park keepers in all of Paris are disappearing. Ladybug states that they must find Mr. Pigeon. Cat Noir asks where, and while Ladybug doesn't know where they can find him, she knows where he can find them.

They go to the Place des Vosges and have Cat Noir pose as a park keeper, keeping an eye out for Mr. Pigeon. He whistles the anthem of France and starts to dance. Ladybug tells him to act natural, or Mr. Pigeon will never appear. Cat Noir responds, saying that he is acting naturally, still dancing. A pigeon sees him and flies off to report to Mr. Pigeon. Mr. Pigeon praises the pigeon for telling him. A flock of pigeons takes Mr. Pigeon away.

Ladybug wonders where Mr. Pigeon is. Suddenly, Cat Noir sneezes, and a flock of pigeons takes him away. Ladybug follows the cloud to the ceiling of the hotel Le Grand Paris. Cat Noir sneezes again, now free, and sees that the pigeons are watching him. Suddenly, Mr. Pigeon appears, standing on a flock of pigeons. He blows his bird whistle, and the pigeons surround Ladybug and Cat Noir, trapping them in a massive bird cage.

Mr. Pigeon, under Hawk Moth's command, tells Ladybug and Cat Noir to give up their Miraculouses or the pigeons will attack them with poop. Cat Noir uses his Cataclysm, making the metal bars of the cage rusty. The cage falls apart and they are freed. As soon as they come close to Mr. Pigeon, he escapes by walking off the side of the hotel, shouting, "Merry Christmas." He sends the remaining pigeons to attack the two heroes.

Ladybug and Cat Noir run inside, slamming the door shut on the pigeons. They head downstairs, but Cat Noir's ring beeps; he has 4 minutes left before his transformation deactivates. The two head to the ground floor finding Mayor André Bourgeois. He tells them that if the pigeons keep invading Paris, all the tourists will leave and he will lose money. He asks them to stop the pigeons, which Ladybug and Cat Noir agree to do.

During this, Cat Noir is bouncing up and down in a hurry. He tells Mayor Bourgeois that he has an urgent need. Mayor Bourgeois picks up on this and allows Cat Noir to use the Royal Suite. He also has Camembert delivered to Cat Noir's room. Cat Noir turns back into Adrien, and an exhausted Plagg falls on the bed. Adrien gives Plagg the Camembert, which is unpasteurized and had matured for two years.

Ladybug, at a higher vantage point, glances out a window and sees that the pigeons are flying in the same direction. Cat Noir appears in an elevator and the two follow the pigeons. They reach the Grand Palais and find the park keepers caged inside. They climb up to the roof to enter the Palais from a window.

However, Cat Noir sneezes, causing Mr. Pigeon to notice them and beginning the battle. He attacks with his pigeons, sending Ladybug and Cat Noir into the park keepers' cage's bars. Ladybug uses her Lucky Charm, and a coin appears. Using her lucky vision, Ladybug spots a support beam and a vending machine. Ladybug runs toward Mr. Pigeon, sliding underneath him while her yo-yo wraps around his ankle. She then jumps up to the support beam, swinging over it once, wrapping up her yo-yo's string. Ladybug runs ahead, putting the coin into the vending machine and buying a small bag of popcorn. She throws the bag in the air and Cat Noir uses his staff to break it. Most of the popcorn lands on Mr. Pigeon.

The pigeons surround Mr. Pigeon and eat the popcorn off of him. As he is distracted, Ladybug yanks on her yo-yo, pulling Mr. Pigeon into the air. The bird call slips from his neck, landing on the ground. Cat Noir goes to grab it, but he sneezes, throwing it away accidentally. Ladybug, Cat Noir, and Mr. Pigeon go after it. They grab it simultaneously, Mr. Pigeon's hand directly on top of it, then Cat Noir's, then Ladybug's. Ladybug grabs Cat Noir's hand and smashes it down on Mr. Pigeon's hand, breaking the bird call. The akuma flies out from it. Ladybug catches it, purifies it, and uses Miraculous Ladybug to return everything back to normal. Mr. Pigeon turns back into Mr. Ramier. Hawk Moth swears revenge on Ladybug and pigeons.

Marinette, at her house, finishes creating her derby hat. At the school, the design competition is about to begin. Nathalie introduces herself to Mr. Damocles, and he wonders where Gabriel Agreste is. Nathalie shows that he is going to be judging via her tablet. Gabriel orders Adrien to take Nathalie around the school. Chloé and Sabrina notice him, turning their faces aside with posh expressions.

Gabriel begins to judge the Derby hats when Marinette arrives. Alya wonders where she has been, but Marinette doesn't answer. Marinette sets her hat on the podium, and Alya points out that it is identical to Chloé's. Mr. Agreste sees Marinette's hat and sees it is identical to Chloé's hat. Chloé fakes innocence and pretends Marinette stole her design. However, Marinette proves that her hat is original by showing her signature on the hat. Chloé runs away crying, calling for her daddy. Mr. Agreste then declares Marinette the winner of the competition. Adrien congratulates her, moving to put on the hat. When it is near his nose, he freezes and sneezes. As Adrien walks away, Marinette jumps for joy, ending the episode.