During a school field trip, Ladybug and Cat Noir meet the American superheroes, whom they have to save from an akumatized super-villain. They will also discover that Miraculous exist in the United States, too.[6]

Marinette's class must travel to New York to celebrate French-American Friendship Week. The whole class participates in it... except Adrien, because his father refuses to let him go. In anticipation of her departure, Ladybug asks Cat Noir to watch over Paris but does not specify the reasons for her absence. The latter takes the mission very seriously... but when Marinette, as a class delegate, convinces Gabriel to let his son go with his classmates, Adrien has a problem. Indeed, the schoolboy is also Cat Noir in secret, he cannot at the same time watch over Paris and be with his class in New York. How is he going to do that? If the two heroes are away, who will watch over Paris? There's one thing Ladybug and Cat Noir don't know: Hawk Moth is also getting ready to travel! The French-American Friendship Week interests him the most and it may well be that American superheroes need a little help! What can Hawk Moth have in mind when heading to New York?

For the French-American friendship week, Marinette and her class travel to New York, the city of superheroes! The perfect opportunity for Marinette to spend time with her friends, especially Adrien. In fact, he’s travelling with his father, Gabriel Agreste, who is particularly interested in a unique exhibition of a precious necklace holding an eagle talon... a jewel that could posses powers that Hawk Moth wants. Ladybug and Cat Noir will soon have to ally with the American heroes to defend them from their enemy!

On July 25, 2016, Jeremy Zag, on Instagram, hinted at the possibility of a crossover special between Miraculous and two other ZAG Heroez shows that take place in New York City, Pixie Girl and Ghostforce.[7]

On February 13, 2017, Jeremy revealed concept art for it and its title, noting that it is "coming soon."[8] However, later information from the official Miraculous Twitter account states that the crossover may not involve Ghostforce.[9]

On October 19, 2019, ON Animation Studios and Method Animation announced that they were looking for crew members to help create storyboards for the latest special episode. It was added at the time that it would be a new 52-minute episode set in New York City and titled "Miraculous New York".[5]

On March 20, 2020, Thomas Astruc said that despite the coronavirus epidemic they are still working on the special and revealed a new character.[10]

One day later, on March 21, Thomas Astruc posted on his Twitter a few seconds of animation with a new character that will appear in Miraculous New York special.[11] Feri González confirmed it to be Sparrow, one of New York's superheroes.[12]

On March 22, 2020, Thomas Astruc posted part of a model of a new female character and added that she is his favorite future character.[13] It was unknown where or when she would appear until Wilfried Pain confirmed that she would be in this episode.[14]

On June 15, 2020 Jeremy Zag revealed a poster for this special with information that it will be released in 2020.[15] On the same day, Disney France announced that the episode was scheduled to air between September 1 and October 2, 2020. The synopsis for the episode was also revealed.[6]

On June 18, 2020 Thomas Astruc confirmed that Majestia will appear in this special.[16]

On July 1, 2020 during TFOU conference were released some designs for new heroes as well as another synopsis for special.[17][18]

On July 6, 2020 French news La Libre announced that TF1 will air both the New York and Shanghai specials during Christmas 2020.[2]

On July 22, 2020, Thomas Astruc confirmed on his Twitter that the special will not include a crossover with Pixie Girl and Ghostforce.[19]

On August 7, 2020, Mundo Gloob announced that on Miraculous Day actors will read script from NY special.[20]

On August 8, 2020, during Brazilian Miraculous Day voice actors read scene from this special. Scene where Cat Noir tries to give Ladybug a yellow rose. He explains that Ladybug refused the red rose because it symbolized love, while white represents purity. This time she needs to accept the yellow rose because it represents friendship and Cat Noir propose a toast for their friendship.[21] 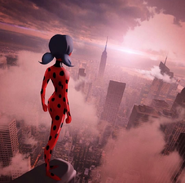