Cancelled
Miraculous Live was a planned live musical that was going to set to open in North America in March 2019[1], but it was cancelled.[2]

Paris is in danger! Join Ladybug and Cat Noir in this high-flying, live-action musical spectacular. With the help of their kwamis, they take the stage to harness the power of the Miraculous!

Being a teenager in the bustling city of Paris is no easy feat, especially when you’re responsible for keeping it safe from evil. Meet Marinette. Her days are filled with school, friends and daydreaming about her crush, Adrien. But when evil Hawk Moth and his akumas strike, Marinette transforms into the crime-fighting superhero, Ladybug. She and her mysterious partner, Cat Noir, make up the ultimate dynamic duo, set to save the day![3] 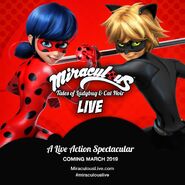