< Miraculous Adventures
View source
watch 01:36
We're Getting Mutants in the MCU - The Loop
Do you like this video?
Play Sound

Marinette and her friends are having fun at the beach when an akumatized fisherman, Silurus, crashes their party! Controlling the water and catfish in the Seine, Silurus makes a lot of trouble for Ladybug and Cat Noir. Will they be able to stop him before he takes his revenge out on the citizens of Paris?[2]

At the massage shop, Master Wang Fu discusses the origin of the kwamis with Marinette, explaining that they are abstract rather than tangible, more similar to ideas or emotions than to physical creatures. Wang reveals that whenever an abstract concept is created, a kwami is created alongside it and that as the kwami of creation, Tikki was the first kwami to exist. Wang explains that a mage created the Miraculouses thousands of years ago so that the kwamis could interact with humans.

The conversation is interrupted when Alya calls Marinette to ask why she's late for an event. Marinette immediately leaves the massage shop and rushes to the Île aux Cygnes, where she meets up with several of her classmates, who have gone to the beach for the day. Alya and Nino reveal that Adrien is currently having a photo shoot on a nearby yacht, and when Marinette shows up she provides a banner to wave from the water to show support for Adrien. Marinette goes into a tent to change into her swimsuit, but Chloé and Sabrina steal her bag with her clothes and her phone and throw it into the water, leaving Marinette stranded in the tent in her underwear.

Suddenly, Silurus emerges from the water supported by a column of water. Several catfish emerge with him, one of whom attempts to swallow Chloé. Silurus states that "the Seine is for fishing, not swimming." Marinette hears screams and realizes that an akumatized villain must be attacking, and she transforms into Ladybug. At the same time, Adrien sees Silurus and dives off the yacht, transforming into Cat Noir. Ladybug then rescues Alix from what appears to be a giant catfish made of water. She then confronts Silurus, saying that Hawk Moth is exploiting his anger, but Silurus refuses to believe her and attempts to steal the Ladybug Miraculous, using his fishing pole and Ladybug's yo-yo to fling Ladybug into the water. While underwater, Ladybug sees her bag that had been thrown in by Chloé and Sabrina. Cat Noir then attacks Silurus, kicking him back into an ice cream stand. Ladybug then emerges from the water and uses her Lucky Charm, which gives her a boat anchor. She comes up with a plan and then ties herself to the anchor using Cat Noir's tail. When Silurus catches Ladybug's yo-yo with his fishing rod, the anchor is too heavy for him to pull into the water, so he pulls himself closer to the beach. Then, Cat Noir uses Cataclysm on the column of water supporting Silurus, causing him to fall and drop his fishing rod, which Ladybug catches and breaks. She then purifies the akuma, and uses her Miraculous Ladybug ability. Realizing that they are about to detransform, Ladybug and Cat Noir run away in opposite directions.

When Ladybug attempts to enter the tent, she is met by Doorman, who leads her through a portal to New York, where she is greeted by Majestia. Cat Noir is also met by Doorman and led to New York, where he is met by Knightowl and Sparrow. The New York heroes explain to Ladybug and Cat Noir that their help is needed in order to defeat the Trash Krakken that is tearing the city apart. 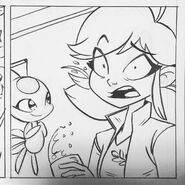 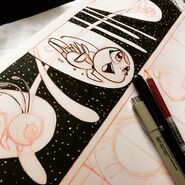