watch 03:27
Wiki Targeted (Entertainment)
Do you like this video?
Play Sound

The Miraculous manga is a manga series based on the Miraculous: Tales of Ladybug & Cat Noir.

The manga was confirmed on July 3, 2016 during a Miraculous panel at Anime Expo.[2]

On October 26, 2019 Toei Animation acquired a Miraculous license in Japan to create manga. The manga is published in Monthly Shōnen Sirius by Kodansha.[3]

On April 26, 2020 Jeremy Zag announced that production of the manga has begun.

On September 13, 2020 Jeremy Zag Jeremy Zag via his Instagram story posted an image of Adrien's transformation with the caption "Manga on its way!!!".[4]

On October 10, 2020 it was announced that the manga will be released in Winter 2020 in Japan for Japanese readers. It was also said that the manga artist is Tsuchida Riku and Warita Koma serves as the storyboard and composition assistant.[5] 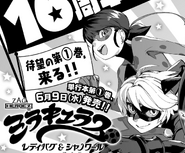 Retrieved from "https://miraculousladybug.fandom.com/wiki/Miraculous_(manga)?oldid=761344"
Community content is available under CC-BY-SA unless otherwise noted.