About 7 months after the film was announced, Jeremy Zag hired Wyclef Jean to rap the film's title theme.

The movie was first revealed during a behind-the-scenes YouTube video posted by user Lindalee Rose, who visited ZAG studios in the U.S.[6] The film was later confirmed to be in production during the "Miraculous" panel at Anime Expo 2016.[7]

Jeremy Zag revealed in an interview on August 25, 2016 that the movie was in the scripting stage and that the story of the movie would be based around Ladybug and Cat Noir's origins and how they both fell in love while including more details.[8]

On July 20, 2017, Jeremy Zag revealed that the Miraculous movie is going to be distributed by Lionsgate.[11]

On July 20, 2018, during the Miraculous panel at San Diego Comic-Con 2018, Ezra Weisz revealed that Michael Gracey, the director of The Greatest Showman, was involved in the film.

On December 6, 2018 during CCXP 2018, it was confirmed that the film is no longer in production.[5] However, the film has been replaced with a musical film called Ladybug & Cat Noir: The Movie that's currently in production with the film's release date being changed to 2021.

On October 16, 2019 during the event at Musée Grévin, is was announced that the live-action film is still in production, filming in Los Angeles, and it will be released in 2021.[2]

Updated poster featuring its newer release date which had been anticipated for 2020. 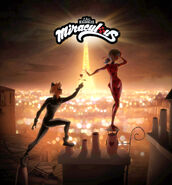