144
Miraculous: Origins is an independent comic book published by ZAG Entertainment and Action Lab Comics, and adapted by Cheryl Black and Nicole D’Andria. It is a novelization of the two origins specials, "Ladybug & Cat Noir" and "Stoneheart", and was released on October 19, 2016.[1]

Every story has a beginning. Discover how Marinette and Adrien, two high school students practically like everyone else, became Ladybug and Cat Noir, and why Hawk Moth is their sworn enemy. This is the PERFECT jumping on point for new readers! 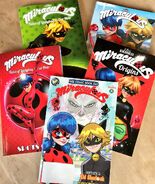