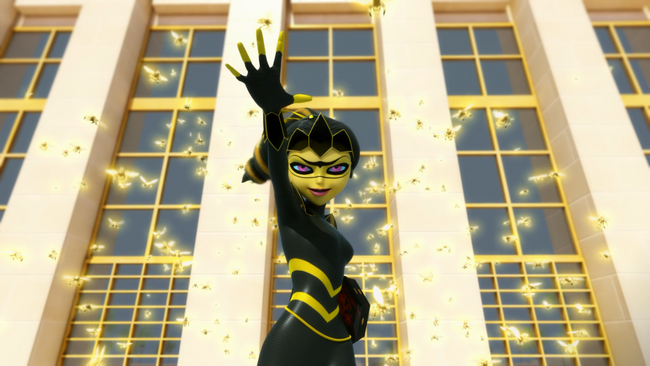 This episode is also the 2nd and final part of the Season 3 2-part finale, "The Battle of the Miraculous."

Hawk Moth akumatizes Chloe into Miracle Queen to help her take control of all the Miraculous wearers; Ladybug and Cat Noir must escape this fatal plan.

After completing her transformation, Hawk Moth gives Miracle Queen the Miracle Box and tells her to use the powers wisely. She teleports the two of them and her army of wasps to the Trocadéro. She orders her creations to sting every Parisian to make them her servant.

Outside in Place Des Vosges, Luka comforts Marinette as both teens see the giant swarm of wasps. Luka sacrifices himself for Marinette, leaving him to get stung by wasps, becoming brainwashed in the process. Marinette uses her power-up to become Aquabug, jumping into the Seine to avoid being stung; Miracle Queen's wasps dislike water.

Adrien and Kagami are about to kiss, but Adrien backs out, stating he isn't ready. Kagami asks him when he'll be ready, Adrien doesn't give her a look, an upset Kagami expresses how much it is hurtful, when the wasps attack. Adrien defensively hugs Kagami, who's confused, but upon seeing the swarm of wasps, she frantically pushes Adrien out of the way and gets brainwashed, while Adrien becomes Aqua Noir and flees into the Seine.

Miracle Queen then orders all Miraculous holders to reveal themselves, which causes Kim, Max, Alya, Nino, Kagami, and Luka to go to her. She mocks Ladybug's choice of Alya, Nino, Kim, Kagami, and Max, but states that Luka is cute before adding that "he gets his clothes from a dumpster". She opens the Miracle Box and orders the heroes to arm themselves. They all do so, except for Nino (as the Turtle Miraculous is in Master Fu's possession) and Kagami (as she gave the Dragon Miraculous back to Ladybug). She orders the others to transform, stating that together they're stronger than Ladybug and Cat Noir and that they're now Miracle Queen's royal guard. She vows to get hold of the Miraculouses for Hawk Moth, as the villainess decides to get her revenge with Ladybug and Cat Noir for not choosing her.

Nearby, Mayura watches over Jade Turtle, still protected by Shell-ter. Hawk Moth walks over to her and tells her that the day has come for finally finishing the guardian off. However, Mayura, still ill, falls, but Hawk Moth catches her and becomes even more concerned about how he is supposed to take her with him for the last time. Mayura assures him that she knew the day that she'll do everything for him. Mayura then creates an Amok and sends her to Hawk Moth's cane, causing Hawk Moth to get amokized. Hawk Moth's emotions of determination create the sentimonster that could break Shell-ter.

Meanwhile, Aquabug and Aqua Noir rendezvous with each other in the Seine. Cat Noir is shocked that Ladybug didn't return the Dragon Miraculous to Master Fu. They realize that Hawk Moth and Mayura have Fu captive, Ladybug blames herself for not transforming back, when she was about to return the Miraculous to Fu. Aqua Noir assures her, that they'll save Master Fu from sentimonster. Aquabug hugs Cat Noir and tearfully thanks him for always being with her, which causes Aqua Noir to hug her back, then they make their plan to defeat Miracle Queen.

Miracle Queen tells the brainwashed superheroes to summon their superpowers shortly after Cat Noir and Dragon Bug (Ladybug after unifying Longg with the Ladybug Miraculous) arrive, blocking out her and the wasps. The heroes start to fight their brainwashed allies and Cat Noir eventually defeats Viperion and grabs Luka's Miraculous, and Cat Noir fuses Sass with the Cat Miraculous to become Snake Noir, using his Second Chance to save Dragon Bug in certain situations.

As Snake Noir apprehends King Monkey, he asks Dragon Bug to open the shield, she opens it and Snake Noir kicks King Monkey's weapon which Miracle Queen catches. She then laughs and calls Snake Noir's attack "pathetic". She keeps insulting Snake Noir's attack just as he throws the frog toy (that was called under King Monkey's power) at Miracle Queen's face, resulting in her akumatized object turning into a disco ball, and her wasps turning into confetti. Seeing their chance to defeat Miracle Queen, Dragon Bug uses her yo-yo to pull her towards them and Snake Noir summons his Cataclysm and destroys an akumatized object, releasing an akuma, causing their brainwashed heroes to stand as the heroes transform back to their original superhero egos as they release Longg and Sass.

Eventually, Miracle Queen gets de-akumatized. Cat Noir teases Hawk Moth for failing once again, but Hawk Moth has none of it and sends another akuma after Queen Bee, who excitedly tries to grab it, only to be stopped by Ladybug, who captures akuma, saying that Hawk Moth is their enemy and can't get to the Miracle Box. Queen Bee furiously reveals that she is no longer a fan of Ladybug, due to her constant refusal to give her Bee Miraculous, she pulls out the remaining Miraculous and starts putting all of them on herself, with Ladybug frantically begging Queen Bee for not doing it, but Queen Bee doesn't want to listen and declares herself the most ultimate miraculous holder. Seeing that he finally won in this fight, Hawk Moth erupts in laughter of joy, seeing that he doesn't have to do anything, and congratulates Chloé for joining the dark side. When Chloé demands that the kwamis transform her, the kwamis ignored her, saying that Queen Bee doesn't know their names or the right transformation phrases and refuse to transform her. The heroes become shocked and betrayed by Queen Bee.

Hawk Moth taunts Ladybug by saying that he already won, while the heroine laments that if she hadn't forgotten to transform back to seek Master Fu, Hawk Moth wouldn't have taken him hostage. She then cries to Cat Noir that she's the worst Ladybug that has ever existed. Fu then reassures her that she is the best Miraculous holder he has ever met, and then relinquishes his position as Guardian of the Miraculous to Ladybug, to the kwamis' horror. Hawk Moth and Mayura leave in disappointment at the sentimonster. While Cat Noir goes after them, Ladybug takes the Miracle Box and becomes disappointed that Chloé betrayed the team, she takes her Miraculous away from her permanently, suspends her from being in the French Miraculous superhero team for good as a punishment for being a traitor. Chloé furiously renounces herself being a fan or friend of Ladybug as she leaves in a huff. After an upset Chloé is gone, Cat Noir comes and tells that he couldn't catch up with the bad guys. The heroes check on Master Fu, only to find out he is still unconscious.

Meanwhile, after Gabriel carried Nathalie to the car, he apologizes for using the last of her strength for nothing. However, Nathalie tells Gabriel that she stole the guardian's tablet and the Peacock Miraculous could be fixed, Gabriel smiles.

Master Fu recovers, but cannot remember who Ladybug or Cat Noir is. Wayzz sadly reveals that the memories get erased when the Guardians pass on the Miracle Box, to protect the secret identities of Miraculous holders, much to Ladybug and Cat Noir's disappointment. Ladybug tries using Miraculous Ladybug and repairs everything, unfortunately, it didn't repair Fu's memories, leaving the two heroes devastated. The old man then gives the young superheroine his keyring at the train station, she smiles at him.

Marinette finds and opens the locker the key goes to. She finds his old phonograph, along with a picture of Marianne Lenoir and a letter for her, which turns out to be the opening narration from this episode and the one preceding.

Marinette brings Fu to the train station. Marianne eagerly steps out of the train to greet Fu. When Fu sees Marianne, Fu declares that while he has just met Marianne, it's as if his heart has known her forever. Marianne tells Fu to always trust his heart. Marinette gives Fu a box of macarons for the journey. Fu thanks her, tells her he'll never forget her, and boards the train with Marianne as both elderly people leave Paris together. Marinette walks away with tears in her eyes.

Marinette and Adrien each get some ice cream from André. They walk down the steps of the foot bridge to their friends sitting nearby and wave bye to each other. Adrien then sits with Kagami, and Marinette (who looks sad after seeing Adrien and Kagami together) sits with Luka, asking to hear his song. Luka sings a song for Marinette as she smiles comfortably.

Before Gabriel fixes the Peacock Miraculous, Mayura creates Optigami to spy on Ladybug. Optigami flies away to possess multiple objects to spy on the Miraculous wearers (offscreen).