Minae Noji is a Japanese-American actress as well as a voice actress who provides voices for anime and video game productions. She voices Tomoe Tsurugi in the English dubbed version of Miraculous: Tales of Ladybug & Cat Noir.[1]

Some of her known voice roles in animation include Britney Wong in Star vs. the Forces of Evil, Tang Shen and Alopex in the Teenage Mutant Ninja Turtles 2012 TV series, Little G in the 2005 Doraemon series, and Ayako in Bojack Horseman. Her video game roles include Say'ri, Idunn, and Cynthia in the Fire Emblem series, Giselle in Stella Glow, Milla Maxwell in the Tales series, Diana in Lord of Magna: Maiden Heaven, and Ren in Etrian Odyssey Untold: The Millennium Girl. 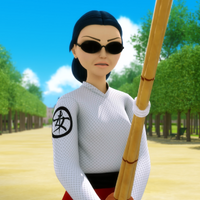