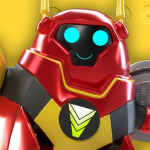 Hello and welcome to my message wall. Feel free to message me about anything, especially if there's a problem and none of the other admins are available so I'll come to solve it as soon as possible. I'll try my best to catch what's up on this wiki and I'm usually online everyday.