Mercury is a superhero from the United States of America, and a member of the United Heroez.

As a superhero, Mercury had blue skin with white lightning bolt-like markings starting from his legs and arms, connecting around his torso. He has several large white dots intersecting the markings: two on each of his knees, two on his hip bones, on on his abdomen, two between his pectorals and collarbone, two on each shoulder, and two on each hand. His palms are white, as well as the soles of his feet. His hair and eyebrows are white and have a similar lightning motif. His eyes are also completely white.

Given that he started acting lazy after being hit by Liberation, he is presumably normally very diligent and active.

Mercury was developed as a character for the old, unused concept of Ladybug and Cat Noir being in a team of superheroes called the Quantic Kids. In this version, he appears to be the same age as Ladybug and Cat Noir, instead of his older appearance in Miraculous New York, and the lightning bolt-like lines across his body had light blue edges. The team consisted of Ladybug, Cat Noir, Melodie, and Sparrow. However, the concept was discarded, and this iteration of Mercury never appeared outside concept art.[1] 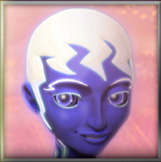