Melodie was a character from the old, unused concept of Ladybug and Cat Noir being in a team of superheroes called the Quantic Kids. She existed in concept art that included Mercury and Sparrow (who was later replaced with Kid Mime), other members of the team. However, the concept was discarded, and so, Melodie never appeared outside of concept art.[1]

It is currently unknown if she exists in the Quantic Universe.[2]

Based on concept art, Melodie had blonde hair that she wore in a single braid except for her bangs. Her eyes were blue.

In her civilian form, she wore a white shirt with a purple vest. She also wore dark purple jeans.

Thomas's original early design for Melodie's outfit was a jumpsuit with a white torso and black lower half. On her torso is a massive black treble clef on a staff. At the base of her jumpsuit was a series of white musical notes, which made an infinity symbol. She had white boots and dark gray gloves. Across her face was a white mask.

Later designs tried different features, like a black bent eight note around one of her eyes on the mask, black dots attached to lines on her chest instead of a treble cleft and over her hands, and a white band covering or beside her braid.

Melodie used a flute as a weapon. In concept art, it appears that she could create a narrow line of fire from an end of the flute, which she could fight with.

Melodie, near Marinette, in the top image. 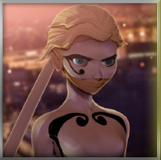 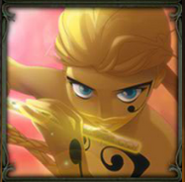 Concept art of Melodie in the Ladybug Artbook.