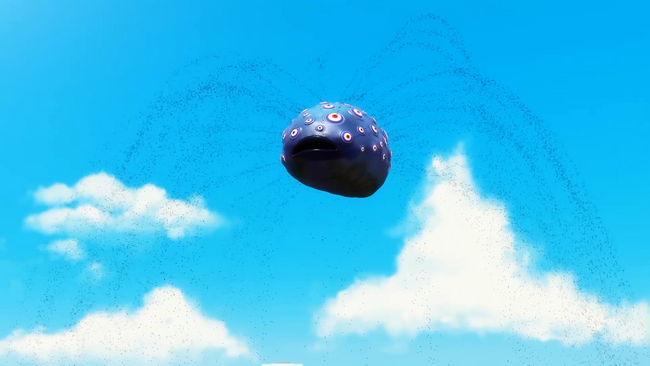 When Marinette and her friends go to protest against the deforestation of a square in Paris, Mayor André Bourgeois is enraged and is akumatized. Now Ladybug will have to defend not only the square, but all of Paris!

The episode starts with Mylène who is afraid of protesting against the mayor, but Ivan tells her not to be afraid and supports her. Meanwhile Marinette who is in her bedroom, is woken up by the noises in the nearby park as Mayor Bourgeois announces that he is keeping his word about keeping Paris clean continuing on from "Reverser" by unveiling plans for Project Oxygen. He starts by saying that he is building a tower that can reduce pollution and produce filtered oxygen for Parisians. The construction of the building would replace the park of Place des Vosges, which prompts Ivan and Mylène to arrive at the Place des Vosges to protest against it. The mayor gets disturbed by Ivan and Mylène and order Roger to keep them away as they are protesting against him. Mylène and Ivan refuse to back down, and end up being escorted home by Officer Roger. Marinette witnesses this and asks Tikki if she should transform to help them out. Tikki replies that the police normally take care of bad guys and is then cut off by Tom calling for Marinette.

Marinette then notices she is getting late for school and immediately arrives in Collège Françoise Dupont. When she arrives in Miss Bustier's class, Miss Bustier questions her about Mylène and Ivan's whereabouts and is informed that they were protesting against the Mayor in the park and taken home by Roger. Alya explains that Mylène and Ivan were trying to stop the Mayor's plan to destroy the park and replace it with artificial oxygen and a tower. Miss Bustier tells the class she thinks Officer Roger made a big mistake, then calls him. Picking up the call, Roger asks if there's a problem with Sabrina, and Miss Bustier says she has a problem with Ivan and Mylène being escorted by police home for protesting against the destruction of the park. She requests that the two be driven back to the park and angrily hangs up to bring the whole class to the building site. Along with Miss Bustier the whole class arrives at the Place des Vosges and protest against the mayor together by blocking the trees. Mayor Bourgeois then tries to convince everyone it would result in less pollution on which Mylène replies the trees are a natural source of oxygen, and they shouldn't be replaced by artificial means. Mayor Bourgeois then shows the commercial for their oxygen project which features the Gabriel and Tsurugi brand.

After watching the commercial, everyone falls for it except Adrien. He is confused because he was told by his father it was just a advertisement for Gabriel's next perfume. Mylène tells everyone that the Mayor of Paris is showing these advertisements just to manipulate them, and just wants to make money out of it. Marinette, then just to show everyone the mayor is actually wrong about the benefits of his project, explains to the mayor that Mylène and Ivan may have misunderstood and says that trees and fresh air is free, but the Mayor wants to replace the natural park with artificial oxygen taken from polluted air so it could be cleaned and sold in plastic bottles that will end up in landfills. André replies that Marinette is right and panics when the crowd becomes astonished by his idea. Alya then spreads the message via her Ladyblog and tells her viewers that the park is being closed. Miss Bustier then says that if Mylène and Ivan want to stop it then she is with them. André attempts to get Roger to stop the students but Roger admits that he actually agrees with them. Various civilians show up to join the protests and everyone gathers together to protect the trees. Mayor Bourgeois is overwhelmed by reporters and is badgered by Nadja Chamack about the project. Shadow Moth senses the anger and frustration of the Mayor, then akumatizes him into Malediktator once again with a sentimonster to assist via amokization, Mega Leech who can shrink and multiply.

Malekdiktator then jump into his sentimonster's stomach, Mega Leech, and commands it to make millions of clones of himself. Everyone attempts to flee but Mega Leech's Malediktator clones spread out and enter the eardrums of various civilians. Ivan takes a hit for Mylène and she fearfully escapes. Adrien hides behind a pillar nearby to transform.

Marinette attempts to transform in an alley but is stopped by Mylène who suggests that they hide in the sewers. Marinette then makes an excuse that she can't hide in sewers because she is afraid of them. Mylène reveals that she is afraid of the dark, humidity, germs and even mice and was also scared of protesting against the mayor but she overcame them and found the courage to move on and accepts that it is a natural reflex. Mylène then gives her a badge that she always carries with her all the time in case she gets scared. Marinette accepts the badge and goes inside the sewers. Marinette acts like a mind controlled victim of Malediktator and scares Mylène off. Tikki appears and Marinette admits that she didn't have a choice then quickly transforms.

Ladybug meets up with Cat Noir and immediately summons her Lucky Charm and gets an ice skate. The ice skate is then used to destroy the nearest clone's sash, releasing an akuma and amok. Ladybug was just about to use her Miraculous Ladybug but she is stopped by Cat Noir, who points out that Mega Leech and the Malediktator clones are still causing havoc. Ladybug then realizes when Malekdiktator used his sentimonster to clone himself, the Amok and Akuma might have multiplied too. Ladybug asks Cat Noir to distract the clones so she can buy some time. Cat Noir questions why he is always the one distracting others, but Ladybug leaves without saying anything.

In the Sewers, Mylène is crying and blaming herself for this problematic situation. Ladybug consoles Mylène and reveals that she knows how to defeat Malediktator. As she begins to give Mylène a Miraculous, Mylène stops her by admitting that she has so many fears and she isn't worthy because of them. Ladybug then tells her that she has overcome many of those fears and all the badges she ever used are like the Miraculous and she fights every day to protect a cause without being noticed like having a secret identity. Additionally, Ladybug tells her that Mylène is already a superheroine and she just needs the last charm. Mylène finally accepts the Mouse Miraculous and immediately Mullo frightens her, causing Mylène to cower behind Ladybug. Ladybug tells Mullo that is not cool and tells Mylène that "true bravery is not the absence of fear, it is to continue even with fear". Mylène finally transforms into Polymouse. Polymouse then inquires about the plan to which Ladybug replies that she is going to take care of the sentimonster and Polymouse will take care of the clones. As she came around the sewers end, she overcomes her fear and activates Multitude, her power. Polymouse uses her power to multiply herself and the ice skate which Ladybug got via her lucky charm. She then frees all of the people under the clones' control while Ladybug meets back up with Cat Noir, unaware that he also fell prey to Malediktator's control. Polymouse quickly gets rid of the clone.

After all the civilians are freed from Malekdiktator's control Ladybug gathers the rest of the team, but excludes Rena Rouge, Viperion and King Monkey. Cat Noir, after seeing the team gathered he asks for them to wait for him to make a group pose. Ladybug then tells Pegasus to teleport Vesperia over the sentimonster so she can paralyze it. Vesperia leaps through the Voyage and appears above Mega Leech and stuns it with Venom. Meanwhile Polymouse defeats the last of the clones. Ladybug commands Ryuko to gather the akumas and amoks into a swarm to contain them. Ryuko uses the wind dragon to create the swarm. Ladybug then gestures for Carapace to use Shell-ter and together they defeat the sentimonster. Polymouse after defeating the clones, ends her Multitude and gives back the ice skate. Ladybug uses her Miraculous Ladybug to revert everything back and repair the damage caused by the supervillain. Ladybug creates a Magical Charm for André. Before leaving, Ladybug advises André to do what is right for Parisians and leave the Place des Vosges alone. All the temporary heroes give back their Miraculouses to Ladybug. Back in the sewers again, Ladybug arrives with Polymouse to take back the miraculous from Mylène. Before leaving, she tells her she was super brave today, and she should be super proud.

Shadow Moth in his lair gives his usual revenge spiel. The mayor announces that after listening to the young Parisians, he is cancelling Project Oxygen. After all they are the future, and in future trees would continue to filter the fresh air. The Mayor announces that he is to plant a tree in the park. Marinette congratulates Ivan and Mylène on winning their protest. The Mayor struggles to plant the tree and the students offer to help. In the Agreste mansion, Adrien arrives back and is asked by Gabriel why he stood up against him at the protest. Adrien argues that he was just against the project his friends proved was bad for Paris and for the planet. Gabriel interrupts and orders him to go to his room. Adrien sadly obeys. Gabriel turns around and twists Emilie's ring on his finger before the end card appears.