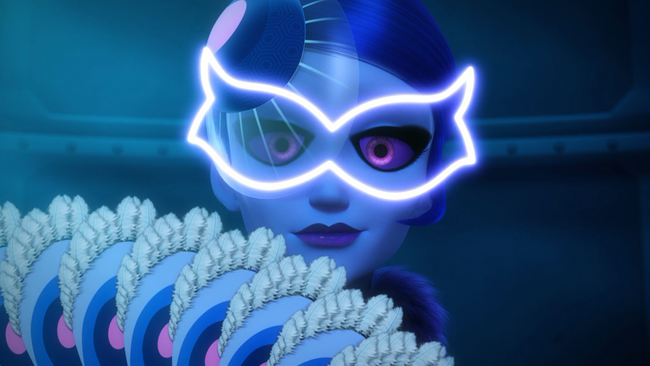 This episode is also the 2nd and final part of the Season 2-based 2-parter, "Heroes' Day."

Ladybug and Cat Noir face one of their most fearsome opponents when Hawk Moth sets a sinister plan into motion by akumatizing his assistant.[7]

Prime Queen announces on live TV that everyone will witness the victory of Scarlet Moth and Heroes' Day will become Villains' Day. As his army of villains are chanting his name, Scarlet Moth is informed by Catalyst that the time has come, and he announces to Ladybug and Cat Noir that if they want to save Paris and all its inhabitants, they must surrender their Miraculouses to him. Cat Noir asks Ladybug what she thinks, and she replies that she knows that Hawk Moth has likely been planning this for a long time and wonders if they're really prepared. Cat Noir assures her that they are since they've defeated all of his akumatized villains before and reminds her that they are five supers now. Assured, Ladybug announces to Hawk Moth that she hopes he enjoyed Volpina's illusion because the real Ladybug will never surrender her Miraculous to him. Cat Noir steps in and he suggests that Hawk Moth will give his Miraculous to the five supers. Rena Rouge and Carapace also add that even though Hawk Moth has an army of supervillains, they are a super team (who's called "superhero team") and Queen Bee says that Hawk Moth is "going to wish that he never wore that utterly ridiculous costume". Therefore, Scarlet Moth orders Guitar Villain and Frightningale to play thunderous music while the other super-villains fight the super team.

As the supers and the Akumatized super-villains run towards each other, Ladybug reminds everyone that their main objective is to defeat Hawk Moth. They fight the super-villains and manage to deakumatize Pharaoh, Princess Fragrance, Riposte, and Mime. Scarlet Moth watches the battle unfold and says that everything is going according to plan, with Catalyst adding how amusing it is watching the supers think that victory is possible when the future has already been decided. Scarlet Moth then sends Dark Cupid after the Bourgeois family, as André is giving a speech to the citizens of Paris telling them they will not give in to villainy, before being called by his wife to join her in leaving Paris. André wonders where his daughter is, and Audrey says that she is likely "playing super" again. Just then, Dark Cupid shoots his arrows arrow at them and Butler Jean, causing their emotions about Chloé being a super to become negative, saying Chloé shouldn't be playing the super-heroine, and should be punished. Scarlet Moth sends an akuma after each of them, and in offering them the power to punish Chloé for her disobedience turns them back into Style Queen, Malediktator, and Despair Bear.

The super team manage to deakumatize Stormy Weather and Rogercop. Ladybug announces to Hawk Moth that his days of hurting innocent people will soon be over. She then summons her Lucky Charm and receives a tennis racket. Quickly coming up with a plan, Ladybug tells everyone to get ready. But before she can implement it, Dark Cupid shoots arrows at all the deakumatized, causing their emotions to become negative and therefore become reakumatized. Cat Noir and the other heroes realize that Hawk Moth is using Dark Cupid to create negative emotions in order to akumatize people. As the five heroes continue to fight, Scarlet Moth sends a swarm of akumas into the battlefield.

Dark Cupid prepares to shoot Carapace with his arrow, but Rena Rouge jumps in the way and takes the hit instead. With that, her emotions become negative and she angrily begins insulting Carapace. Ladybug tries to convince Rena Rouge not to give into negative emotions and Carapace even restrains her, but this does no good. Queen Bee promises Ladybug that she will never let negative emotions take her over, but Scarlet Moth says that she should never say never as Style Queen and Malediktator appear before the superhero. Meanwhile, Rena Rouge pushes Carapace away and allows an akuma to infect her Miraculous, turning her into Rena Rage. Saddened that he couldn't save her, Carapace is also akumatized into Shell Shock. Despair Bear sneaks behind Queen Bee and holds her in place while Dark Cupid shoots an arrow at her. An akuma then enters her Miraculous, turning her into Queen Wasp. Cat Noir suggests that Ladybug use her Lucky Charm, but Ladybug says that it won't work because it required everybody's help. So instead, Cat Noir uses his Cataclysm on the ground, allowing him and Ladybug to escape underneath.

Ladybug and Cat Noir escape into the sewers and run on opposite sides of the sewers and transform back into their civilian alter egos. As they feed their kwamis, Marinette comments on how Hawk Moth has never reakumatized so many people at once and notes that something has changed. Adrien believes that he has figured out a way to boost his powers, just like them. Marinette wonders if they'll be able to beat him without a team, but Adrien assures her that they can. Just then, the duo hears the akumatized villains heading towards them, so they quickly feed their kwamis the aqua power-ups and jump inside the sewer waters as they transform. They are soon met by Syren and Animan, but they start a duel and manage to deakumatize the two. As they head back up, Frozer uses his powers to turn some of Paris into ice, causing the sewer waters to freeze. Fortunately, Ladybug and Cat Noir escape this just in time and transform into their normal superhero forms and deakumatize Frozer. Ladybug then announces to all of Paris that the real Ladybug is back and releases all of the purified akumas, giving the citizens hope. With that, Scarlet Moth angrily orders Prime Queen to stop filming.

But seeing Hawk Moth's army the duo retreat and come across a blockade made up by the people of Paris who have come to support them. Ladybug and Cat Noir thank them but tell them to be careful heading for Scarlet Moth. Along the way they see the reason why they shouldn't give up. Scarlet Moth then tells Catalyst that the heroes are more resistant than he expected, but Catalyst tells him they still have the last part of their plan. With that, Scarlet Moth walks to the other side of the Eiffel Tower.

The supers then see Scarlet Moth and come up from behind him. Ladybug tells him that it's only the three of them. Cat Noir summons his Cataclysm, and Ladybug summons her Lucky Charm and receives a replica Miraculous box, which she believes is a sign that Hawk Moth's Miraculous will end up in that box. Scarlet Moth asks the supers if they're sure that they're not making a mistake, as his wish is something beneficial. Ladybug says that every wish has a price to pay, and Cat Noir believes that no matter what his wish is, it must be evil considering the chaos he's causing. The supers are unaware of it, but the Scarlet Moth they are confronting is an illusion made by Volpina. The supers approach Scarlet Moth's illusion and Ladybug tries to convince him to do the right thing by handing over the Butterfly Miraculous, but then she sees the reflection of the real Scarlet Moth behind her through the Miraculous box as he fires an akuma after each of them while Dark Cupid shoots his arrows. She and Cat Noir dodge the attack and deakumatize Dark Cupid. Scarlet Moth rages over his failure of akumatizing the two supers. Calling him a coward, Ladybug and Cat Noir fight Scarlet Moth in a duel. Scarlet Moth is about to hit Cat Noir with his cane, but then Ladybug takes the cane with her yo-yo and Cat Noir destroys it, reverting Scarlet Moth back into Hawk Moth and deakumatizing all the super-villains. Angry that the plan failed, Catalyst exits Hawk Moth's lair, goes into Gabriel's safe, and takes the Peacock Miraculous.

Seeing that he has nothing left to lose, Hawk Moth fights Ladybug and Cat Noir and easily overpowers them. He comments on how inexperienced they are since they lose their transformations shortly after they use their superpowers. As he is about to take their Miraculous, Carapace, Rena Rouge, and Queen Bee rejoin Ladybug and Cat Noir and stop him. The five supers corner Hawk Moth and Queen Bee summons her Venom in an attempt to paralyze him.

Now as Mayura, Nathalie plucks a feather from her fan and, after infusing it with energy, sends it into Hawk Moth's now destroyed cane. She offers him her help, to which Hawk Moth agrees reluctantly. A giant purple moth creature appears and manages to distract the supers long enough for him to escape, leaving his cane behind. The team begins to suspect that the Peacock Miraculous holder is helping him. They decide to use the cane to track him down, but when he detransforms, the cane fades away. However, as Ladybug and Cat Noir are about to detransform, Ladybug uses Miraculous Ladybug to fix the damage. As the mission is over, Ladybug takes the Fox Miraculous and the Turtle Miraculous from Alya and Nino while Cat Noir takes the Bee Miraculous from Chloé.

Back at the Agreste mansion, Gabriel speaks to a drained Nathalie and reminds her that he'd told her never to use the Peacock Miraculous. Nathalie says that she had no choice as he was in trouble, but Gabriel retorts that the Miraculous is damaged and too dangerous. Nathalie responds that she wanted to help no matter the price. Grateful, Gabriel thanks Nathalie and comforts her.

In the evening, Miss Bustier's class has a picnic while Lila Rossi angrily observes from her apartment because she wasn't invited. Adrien attempts to sit beside Alya and Nino, but Alya says that the seat is taken and suggests that he sit by Marinette instead. However, Adrien soon receives a phone message saying that he has to go attend a charity event. Before he leaves, he tells Marinette that she is always helping others, which is why the class agreed to help her organize the picnic. He calls her their everyday Ladybug and he called her "Super Marinette" and bids her farewell. As he walks away, Marinette runs over to Adrien and thanks him by kissing him on the cheek. Adrien smiles and leaves. Once he's gone, the whole class except for Chloé cheers for Marinette as the end card appears.