In "Gamer", she gives it to Adrien to cheer him up, claiming that it provides good luck.

In "Gorizilla", Adrien's bodyguard is akumatized and, the akuma lands on the bracelet he's holding and it becomes his akumatized object.

**And in "Lies", Adrien has it in his pocket before it falls down to the floor and picked up by Kagami.
*The bracelet has become the akumatized object to two different akumatized villains, with those being Gorizilla and Lies. 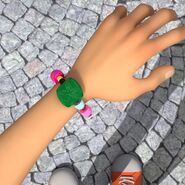 The bracelet on Adrien's instagram
Retrieved from "https://miraculousladybug.fandom.com/wiki/Marinette%27s_bracelet?oldid=739036"
Community content is available under CC-BY-SA unless otherwise noted.