Marieve Herington is a Canadian-American actress and singer. She voiced Sabrina Raincomprix/Vanisher in the English dubbed version of Miraculous: Tales of Ladybug & Cat Noir for Season 1 and "Despair Bear" for Season 2.

Herington is a native of Oakville, Ontario, Canada, where she attended St. Mildred's-Lightbourn School. She studied drama at the University of Toronto.

Appearing in a series of Canadian Tire and KFC commercials, she joined ACTRA at the age of 9. Her first jazz group, Marieve and her Midnight Blues, played the annual Downtown Oakville Jazz Festival, Oakville Waterfront Festival, restaurants, and other local events. Her first album, Blossoming, published under her own label Maribelle Records, was made available on the Timely Manor label distributed through Fontana North/Universal. She performed on the Toronto jazz circuit with Babes in Jazzland and members of The Royal Jelly Orchestra, appearing on two more albums.

Herington moved to Los Angeles in 2008. The Marieve Herington Band performs in southern California and Toronto. Their latest album is Midnight Sessions.

She is best known as the voice of Tilly Green on Disney Channel's "Big City Greens". 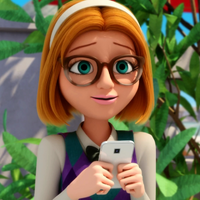 Herington's name on the English credits.

Herington's name on the English credits of Tales from Paris.

Retrieved from "https://miraculousladybug.fandom.com/wiki/Marieve_Herington?oldid=716769"
Community content is available under CC-BY-SA unless otherwise noted.