It is used by Luka Couffaine when he is lent the Snake Miraculous to become Viperion.

The lyre is mint green with six light green strings running down the middle of it. The lyre also has light green diamond patterns with black borders on the lower edges.

The music played on the lyre can be used to distract enemies, providing an opportunity for the Snake Miraculous owner's allies to strike. In close combat, it can be used to bind a person's hands in between the strings and can be thrown for long-range attacks. 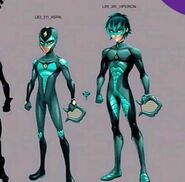 Retrieved from "https://miraculousladybug.fandom.com/wiki/Lyre?oldid=739399"
Community content is available under CC-BY-SA unless otherwise noted.